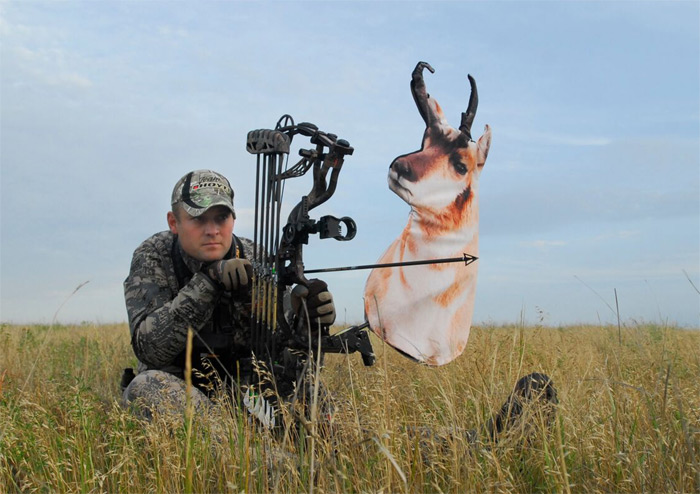 I watched the pronghorn buck slowly move toward my position. To my dismay a satellite buck was moving in on the herd from another direction. The herd buck looked at me and then at the live threat and decided that the other buck warranted his attention more. As I watched, the herd buck ran the small buck off into the distance. I decided to hold my position and see how things would unfold. I gave several bugle sequences towards the does that the buck had abandoned. Confused, they worked their way toward me while the buck was off showing he was the boss. As the buck jogged back toward the herd of does I hit him with a challenge bugle. The buck slowed and I hit him with another series of grunts. His aggression took over and he charged in my direction, stopping at less than 20 yards. As the buck turned to leave I drew my bow from behind the decoy and watched my arrow sail through both lungs.

This hunt opened my eyes to the effectiveness of using a decoy for rutting pronghorn antelope. Until this hunt I had experienced many fruitless attempts using a decoy and was convinced they didn’t work. I have since shot several Pope and Young bucks from behind a decoy and have confidence that many more will follow. Through trial and error I have developed some strategies that have worked for me and I would like to share with you.

Obviously, targeting aggressive herd bucks during the rut dramatically increase opportunities to take one home with you. One of the most important factors in enticing a buck into range is being able to close the distance on the herd. First, use the terrain and vegetative cover to move close and penetrate the buck’s comfort zone. The closer you can get the better. I have tried using the decoy for cover in the past, moving while using the decoy as a shield. This can work if you need to cover a few yards in the open but I have rarely fooled an animal when moving considerable distances in more open terrain behind the decoy. For best results, try to remain unseen before showing the decoy.

Equally important, from my experience, is the use of a call in conjunction with the decoy. When a satellite buck ventures too close to a buck that is tending his herd of does, the dominant buck will sound off a series of grunts, or a challenge ‘bugle’. The bugle will consist of a longer note followed by 3-5 short notes (Pvrrr-pft-pft-pft-pft). Don’t confuse this with the single high pitched sound you will hear when they are on full alert and alarming the others. There are several companies that produce pronghorn calls including Primos and Woods Wise. I have also used a crow call to imitate their sounds.

During a past hunt I was able to use several of these tactics. I glassed a herd of antelope in a field that consisted of taller grasses and forbs.  I lost sight of the herd and assumed they had bedded down on the back side of the small hill where I had last seen them. The tall cover was great to approach the antelope but it was so tall that I lost sight of the herd and was unable to pinpoint their exact location. When I felt I was within the buck’s comfort zone, I got into position with an arrow ready. I set up the decoy and let out several challenge bugles. Within 30 seconds the buck had charged in and was standing broadside at 30 yards. The arrow found its mark and I was tagged out before noon on opening day.  When conditions are perfect it can happen that fast.

How to set up the decoy and get into position to shoot can vary due to personal preference. Typically an antelope will approach the decoy and circle on the downwind side. I usually sit on my butt with my feet extended straight out toward the stakes of the decoy. This allows me some separation from the decoy, and I can use my feet to help stabilize the decoy in the wind. Another option is to kneel down behind the decoy and shoot over the top when the buck approaches. Sitting on the ground conceals your movements better but if the buck comes in where you don’t expect him to it can be difficult to quickly change position. From my experiences it is important to position the decoy so the buck will approach and circle on the side of the decoy where you feel more comfortable shooting. Being right handed I want the buck to approach from my left because it is easier to swivel my upper body that direction for a shot.

Knowing when to draw your bow is a key component to success. I typically wait to draw after the pronghorn is in range. All of the bucks I have arrowed have stopped once they were close to the decoy and I have been able to draw my bow from behind the decoy at this time or when they turn to leave. I have friends that have been successful while decoying that prefer to draw early while the buck is charging in, allowing you to be ready to shoot when the opportunity arises.  I prefer to wait just in case the animal picks up my movement and either causes him to stop short or bolt.

There are several different antelope decoys on the market including Montana Decoy and Heads Up Decoy, both provide 2-D options and are made out of fabric.  Other 2-D options are made of hard plastic and fold up for easier transport. There are these types of models available from Mel Dutton, and Flambeau. Carry-Lite is also producing a 3-D hard plastic decoy that looks very realistic but transporting them is more difficult. I prefer the fabric decoy options over the others because they are quiet and lightweight while looking very realistic.

On a hunt in 2008 I located a lone buck on the back side of a ridge. A lone buck isn’t the best scenario for decoying but I knew I would be able to get close without being seen. As I approached the ridge top I spotted the buck with his head down feeding.   I quickly set up the decoy and got into position for a shot and issued a few challenge bugles even though I couldn’t see the buck. I thought maybe he had spotted me setting up but gave it several minutes before my impatience won over and I had to sneak a peek to try to relocate the buck. He was still there and headed my direction. I scurried to get into position again and the buck slowly made his way to 20 yards. As I drew my bow the buck froze but it was too late, and the decoy had produced again! 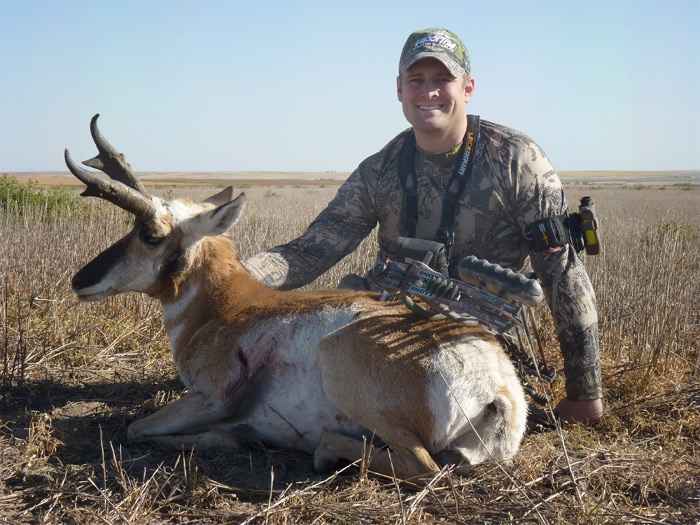 While aggressive herd bucks present the best chance for action, the hunt above shows that it never hurts to try any buck you see. This buck was alone and had nothing to protect so the challenge bugles fell on deaf ears but the decoy was still able to lure him into shooting range. Using a decoy can be frustrating at times but when things come together there is not a more exciting way to hunt Pronghorn Antelope.