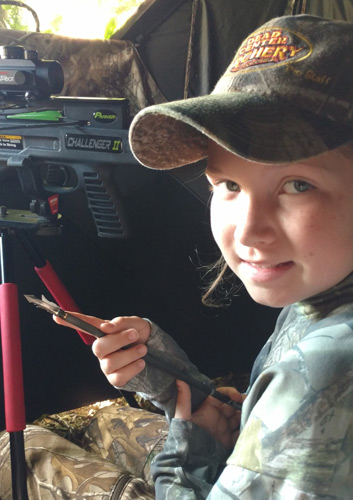 Grim Reaper Broadheads on a Black Eagle shaft. It just doesn't get any better than that.

It was October 11, 2016 and I raced home from work to move the ground blind my daughter and I were hunting out of for the night. My son, Samuel, waited for her to get off the bus and they both dressed in the basement for the evening hunt as I was moving the blind about 25 yards up the treeline. I had decided the blind needed moved after our sit the previous Tuesday. Not to mention that every evening deer were still filtering out into the bean field from the corner.

I then walked back to the house and as I got close I could hear the two of them carrying on about who was going to shoot the first deer of the season. Samuel was talking about holding out for a big buck and Abby quickly interrupted saying, “I am gonna kill a buck before you! Dad has me in his secret spot!” I laughed at their conversation and smiled knowing they were so excited to head out into the woods. I can only hope they will carry on the tradition with their own kids someday.

I popped my head in the door and asked if they were ready and they both energetically yelled, ‘yes’! We gathered up the stuff we would need for the evening and headed out to the woods for an excellent night of hunting.

Abby and I walked to the newly relocated blind and Sam headed to his ladder stand. Abby was talking a mile a minute and was excited to see where I had moved the blind. She unzipped the blind and crawled in the door. As quickly as she went in she screamed and was back out. I asked what was wrong and she said there was a big spider in the blind. I asked if she needed her crossbow and she rolled her eyes. I went in the blind and caught the spider and put it on the forest floor. Abby went back in the blind and checked for more spiders. She was satisfied that there were no more spiders and said we could set up. I set up her tripod, loaded her crossbow with her Executioner Bolt and she sprayed down with Nature? Essence. She was ready for another evening and said, ¨ Tonight is the night!¨ 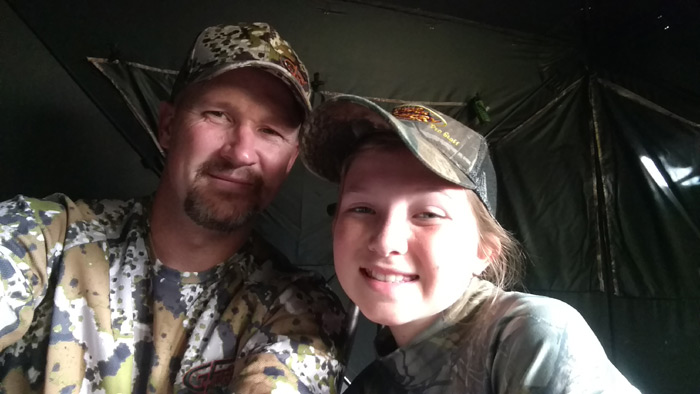 The evening was passing quickly as we talked about her upcoming math and spelling tests. We practiced her spelling words and did multiplication problems as time passed. I asked if she wanted me to go out and hang a Buck Cage in the bean field. She shook her head yes and I left to set up a stick that could hold the Buck Cage. This would give her the opportunity at a 20 yard shot. Abby asked what was in the Buck Cage, so I explained that the scent was vanilla. She wrinkled her nose and said, ¨Do deer like vanilla?¨ I explained to her that they were attracted to it because of the sweet smell. She said, ¨ I like chocolate better than vanilla, maybe we should try that!¨ I laughed and thought about it for a moment and said, ¨We can think about that one!¨

The sun started to fade over the treetops and Abby spotted 4 turkeys coming into the bean field. They slowly fed toward the blind until they were about 12 yards away. Abby asked if she could shoot one and I told her they were not in season yet. She aimed with her crossbow and pretended to take a shot.

She giggled as the turkeys ate and pecked at bugs on the ground until they disappeared into the woods. She turned to me and said, ¨Now it is time for the deer to come out and feed!¨ No sooner did the words leave her mouth did I tell her to turn around. There were 4 deer trotting out into the bean field from the direction the turkeys went into the woods.

Abby turned around and quickly got into position behind her crossbow. She turned on the red dot scope and looked for one of the 4 deer. I told her to be calm and let them stop walking. The lead doe was on a brisk pace heading across the field, The three other does walked quickly behind her. They were on a mission to go somewhere and were not going to stop. Abby whispered to herself, ¨Please stop, please stop!¨ The deer were there and gone in a moment. Abby turned around and asked, ¨Why didn’t they stop?¨ I told her they were looking to just eat and run! She didn’t find that the least bit funny. I told her there was still lots of daylight left and still a chance deer would visit the field. She smiled and turned her red dot scope off.

A crazy squirrel was outside the blind running all over the place. He even dropped a few nuts on the top of the blind. Abby and I laughed as he chattered and called to other squirrels in the woods. Abby asked if she could hunt squirrels when the season opened. I told her she can hunt whatever she wishes as long as I can come along. She cocked her head and said, ¨Dad, you have to be with me, I am only 10!” She gave me a fist bump and then held my hand for a few minutes. The sun went behind the trees and the temperature was dropping quickly. She always says I have warm hands so I think she just wanted to have her hands warmed up. Or maybe it was just her special way of showing me thanks for taking her out hunting.

I could see a deer in the woodlot walking toward the bean field and told Abby. It was walking our way. She looked out the window and asked if it was a buck. It was a doe and we watched as it worked its way out to the corner of the field and slowly started feeding on the delicious beans. We watched closely with racing hearts and I wondered if this would be the moment of truth or another let down.  The doe stopped feeding and looked cautiously behind her into the woods. She then put her tail in the air and bounded away. I told Abby to be still so we could see what scared her. To our surprise, we watched as a red fox came out onto the field.

Before she could even ask, I said, ¨No you can’t shoot the fox. They are not in season yet either.¨ I could tell she was upset and frustrated. I began to talk quietly to her about hunting when I was young. I told her how I was not able to hunt till I was 12 and I was 18 before I killed my first deer. I explained how the state of Pennsylvania has made it so that young boys and girls, like her, can start hunting at a younger age. She smiled and said, ¨I hope I shoot a deer before I am 18!” I smiled and gave her a big hug.

We waited for the light to fade and then closed up the blind. We gathered up our stuff and walked back to the house. Hand in hand, perhaps a bit disappointed, we talked about the next hunt and made plans for Thursday. I feel so blessed to have such a dedicated, passionate young lady in the woods with me. My fingers are crossed that she can experience the thrill aiming at a deer and having some success. We will see what happens on Thursday!