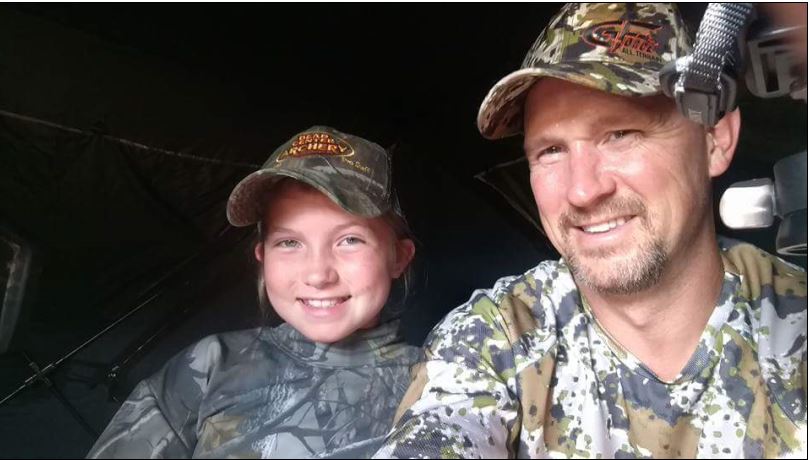 Father and daughter on the quest.

¨Just one shot is all I want!¨ Those were the words my daughter said to me as we left for our first sit in the ground blind that I set up for us to hunt. It was the first Tuesday, October 4th, 2016, of the Pennsylvania Archery season. We slowly sneaked along the inside of the treeline to the blind careful to be as stealthy as possible. It was 4:00 in the afternoon and I knew the deer wouldn’t be moving until later in the evening. Still, with her energetic attitude, I relented and we slipped into the blind.

A week or two prior to this day, I placed a ground blind inside the treeline of a woodlot that was beside a big bean field. My whole family would spend evenings watching a vast multitude of does parade out into the field each evening. There would often be some yearling bucks that ate with the does and my daughter, Abby, kept a close eye on them. She would constantly say, “Just one shot is all I want!” The rest of us would give words of encouragement, and hope that she would get her chance.

Finally, we reached the blind that I had brushed in and we set up her tripod and loaded her crossbow. The Black Eagle Executioner bolt was loaded and we were set for the hunt to begin. Abby asked lots of question through the hunt. She asked about the Grim Reaper broadheads, and how they worked. I showed her how the blades open on contact, and are spring loaded to ensure they open up and make a good cut. She also asked why she was using lighted nocks. I explained to her that it would help me track the flight of her bolt as it travels very fast. Abby sprayed down with Nature’s Essence products, and remarked about how she smelled like dirt. I laughed as she applied more to her face, head, and hands.

Abby sat very well during the long wait for the deer to come to the beans. She found acorns on the floor of the ground blind and asked why deer liked them so much. I explained how acorns provided deer with a good food source full of protein and other things they need. She said, ¨That doesn’t sound like it tastes good!¨ I told her to try one and she wrinkled up her nose.

Watching the field with much anticipation, Abby was waiting for the first deer to arrive. She whispered, ¨Oh, NO!¨ I asked what was wrong. She pointed out to me that there were people walking around on the other side of the bean field. I told her to relax that it was still early, and that those people were just passing through and it would not bother the deer. The group passed by unaware we were hidden in the blind and she relaxed a bit and continued to watch the field.

The sun was quickly setting in the western sky, and I could hear deer coming our way. I told Abby to watch the window and see if she could see them in the field yet. I could see them enter the field to our right but she could not. I watched one doe enter followed by 2 smaller does. Then there was a whole herd that entered the field. I had the camera ready to capture the action as it would unfold. She sat steady in her seat waiting for her moment. I kept tabs on the doe as they moved our way. All seven were closing the distance quickly. I ranged the biggest doe out about 40 yards and cutting the distance fast. The wind was in our favor and Abby was starting to shake.

Abby was ready for the moment of truth to happen. She was focused and she was excited. Her red dot scope was on, all she needed was any of the big does to step into her sight. I spoke quietly to her to reassure her that she could do this. The lead doe stopped in her tracks and look to the other side of the field. The other does stopped as well and were frozen like statues. Abby whispered, ¨Why did they stop?” I looked across the field and saw that the deer were looking at the group of walkers coming back and this time they had their dog. The lead doe stomped her hoof to the ground, snorted and the field cleared instantly.

Not knowing what to say, she sat in silence for a minute. She turned to me with tears in her eyes and asked why the people had to be walking by the beans. I explained to her that when you hunt, things don’t always go your way. We packed up all our stuff and watched the last light fade out of sight. It was a quiet walk back to the house but she found comfort while holding my hand as we walked. Her mood grew better by the time we arrived at the house and she said, ¨Guess we will have to get them on Thursday!¨

That 10 year old daughter of mine has a wonderful attitude. I am sure we will have more great adventures and close calls during the remainder of the season!  And, we invite you to join us on her quest for her first whitetail deer.