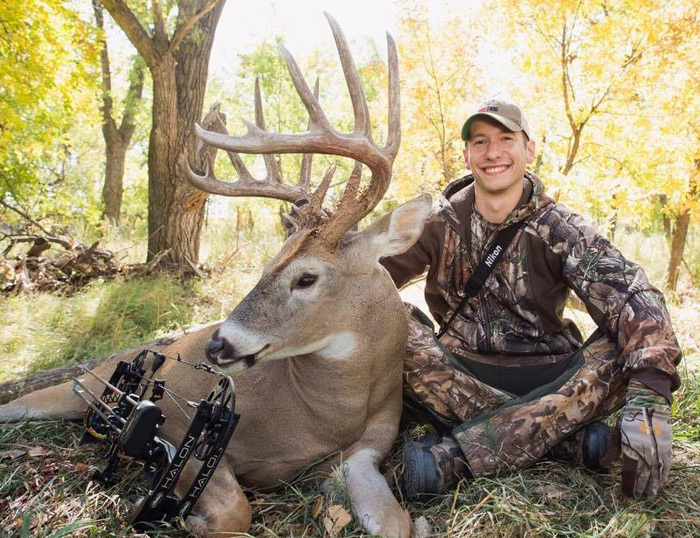 Outdoor writer Greg Miller, who knows a thing or two about quality field photos, snapped this shot of nephew Zane Miller posing with his trophy Dakota buck. Note the absence of blood and respect for a fine trophy animal in this neat photo.

IT’S THAT TIME of the year! Fall hunting seasons are open or opening all across this great continent, and photos of happy hunters posing with their trophies are being snapped and shared daily.

The good news is many of the photos perfectly capture images of the proud hunter beaming over his or her trophy buck, bull, or whatever. And with all due respect to the Pope and Young Club, that spotlighted “trophy” need not end up listed in the bowhunting record book to merit that honorary title. “Trophies” come in all sizes, shapes, and sexes. Just ask a youngster who is button-bustin’ proud of a fat doe or a first-time elk hunter grinning ear-to-ear while kneeling beside a spike bull.

Even after the hundreds of bow kills I’ve witnessed and made over a bowhunting career that now spans more than half a century, I consider every animal I arrow to be a true trophy. Why? Because I believe any animal legally taken under the rules of Fair Chase is special. It doesn’t have to qualify for the record book, so long as it qualifies for mine.

Regardless, preserving memories of those special moments matters – or should matter. And for my money, there’s no better investment than a small digital camera that easily fits into a shirt or pants pocket or day pack. While ubiquitous cell phones are commonly used for photo-taking, I prefer mini-cameras for their overall photo quality and convenience. But, of course, I’m admittedly an old school, low-tech geezer who believes phones are for talking and cameras are for taking pictures.

Speaking of photos, I can’t help but notice the content of each photo I see, as well as its quality. That likely stems from many decades spent selecting and publishing feature articles and pictures for BOWHUNTER. One popular spread in each issue was called “Bowhunter Potpourri.”  It contained a few pages of nothing but readers’ field photos and captions submitted by hunters wanting to share proof of their success. Not surprisingly, thousands of pictures poured in, allowing me to choose only the best for publication within the allotted and limited space.

Sharp, clear photos always caught my eye. Still do, for that matter. In addition, I avoided pics with excessive blood showing. No arrows jutting from the carcass, either. Ditto for open mouths, lolling tongues, gut piles, gaping wounds, or exposed chest cavities. Also, since animals don’t live in the back of pickup trucks, garages, or barns, those photo settings were off limits. Lastly, no animals dangling by their necks from some tree limb or backyard swing set.

In other words, I always chose photos – and posed my own field pictures – showing obvious respect for the “trophy.” Photos published in magazines and posted online are viewed by hunters and non-hunters alike. When I see an overly bloody or otherwise graphic picture of a dead animal, I know it’s an open invitation to criticism by not just hunter-haters but non-hunters who are either neutral or even supportive of hunting and hunters. Antagonizing potential allies, to me, is downright dumb. Always take pics suitable for anyone to view. Man, woman, or child.

With a minimal investment of time, water, and paper towels or rags, it’s a simple matter to clean bloody mouths, nostrils, and wounds. Whenever possible, pose the animal in its natural surroundings with native vegetation, trees, brush, etc.  Once that’s accomplished, consider the following suggestions for snapping photos of this once-in-a-lifetime moment of you with your most recent kill:

Get close and get down. Avoid shooting down at the animal and hunter. Stoop, kneel, or plop down on your belly in front or slightly to one side of the animal. Take plenty of photos, asking the hunter to turn the animal’s head slightly with each shot. Make certain the tongue is tucked inside the mouth or removed with a sharp knife. If possible, tuck the legs under its body as if bedded. This works well for deer, pronghorn antelope, sheep, goats, and smaller game. More often than not elk, moose, and bison are photographed where they fell, for obvious reasons, unless you have several buddies with you to help position the animal, or you wear a red cape and have an “S” on your chest.

Avoid harsh sunlight whenever you can. Overcast or cloudy conditions, along with setting up photographs in shady spots that aren’t sun-dappled, are great for daytime pics. Make sure the hunter’s cap bill doesn’t cast a shadow over his eyes. Use a fill-flash when necessary. Don’t shoot toward the sun; have it behind or to one side. Keep buildings, motor vehicles, and people out of the background. Snap more photos than you think is necessary, then take a few more. It’s amazing how often something you don’t notice at first glance will spoil an otherwise good picture. Check the photos from time to time to make sure they’re what you want. If not, adjust accordingly.

Nighttime photos are not ideal when game is recovered after dark. By all means take some flash photos, but consider field dressing that animal and taking posed pics the following morning (unless warm weather conditions require prompt attention to cool the meat). Heat is the mortal enemy of tasty meals. Large animals like elk and moose require immediate attention unless the temps are downright chilly or cold.

Take front, rear, and side views of antlers and horns. Always take some shots of sky-lined or silhouetted racks, if possible. Make sure all antler tines aren’t lost in the background clutter of limbs, leaves, camo clothing, etc. Turn the animal’s head slightly between pictures to show different angles. Close-ups of unusual kicker-points or drop tines are always good to have.

Add a touch of color! Like many pro bowhunters who’ve had thousands of photos published in books and magazines, I try to show colorful fletching and fall foliage, or wear a bright red bandana, while posing with my game animals. It’s not necessary, but dresses up camouflage attire and brightens drab pictures.

Act as if you’ve posed for photos before. There’s no need to flash goofy gang signs or strike the ol’ thumbs-up pose, pump your fist, or otherwise mug for the camera. Don’t pose with a cigarette dangling from your lips or while holding a beer can. Always treat your trophy with the respect it deserves. Never yield to the temptation to put your cap on a dead animal’s head. It cheapens the trophy and can leave the impression you’re a disrespectful jerk.

Finally, consider the eyes. To avoid the bane of photos with dull “dead-eyes” or white-spot eyes caused by flash photos, visit your taxidermist and invest in a pair of inexpensive glass eyes for deer, elk, antelope, sheep, goat, caribou, or whatever. They easily slip over the pupil and produce a lifelike quality missing in most photos of dead game.

Photos of hunters with their kills date back to the 18th century. They preserve special moments in time and will complement stories about any hunt. Good photos are extra special and may be treasured by family members long after you’ve gone to that happy hunting ground to share a campfire and stories with Fred Bear, Howard Hill, Ben Pearson and other bowhunting legends!