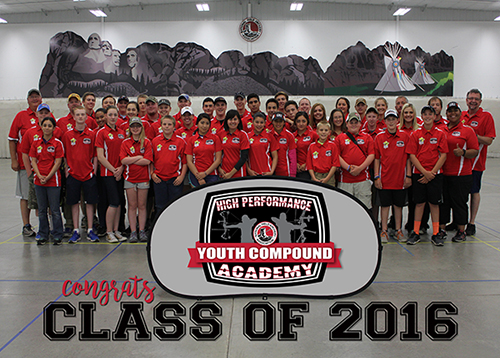 The Academy stayed true to its ‘High Performance’ title, with attendees learning and training all four days from 8 a.m. to 9 p.m.

“The first two days were nothing but shooting and working on form. After listening to seminars on shot execution and proper form, the students immediately had time to work with what they had learned,” Coach Jos commented. “The coaches went around and helped every single one of those archers.”

The coaches were impressed with how open and flexible the students were with trying new things, making the Academy much more effective. Guest Coach Paige Gore agreed that the students came willing to learn.

“It’s so cool because the group of kids really care if they improve or not and they’re eating up everything we’re throwing at them,” Gore said. “We told them ‘if there is something you’re struggling with, you need to come up to us and ask us.’ A lot of the kids came up and asked for help; it was great to see.”

Compound student Caroline McCracken said she appreciated the amount of time the students got to spend with Professional archers Gore and Ryals.

“They gave us really in-depth answers to our questions and they gave us a lot of their time,” McCracken said. “This has been one of the best camps I’ve been to. I definitely got a lot more out of this camp than any other.”

Guest coach Mike Price said the uniqueness of this camp is the amount of coaches available to help the young archers.

“There are so many things to take away from this academy. There are so many different eyes to help them- from their bow fitting them to helping them process their shot execution,” Price said.

“The camp was instrumental in my son’s push to go pro. The camp helped us pay attention to the small details,” Price said. “This camp is very detailed, it helped [my son] with his mental game. Something like this doesn’t happen locally, all these different coaches seeing the same thing but in different ways.”
The potential to go pro was a big focus in Gore’s presentation. She spoke to the attendees about how they can advance their archery careers to the professional level while balancing a social life, education, and their archery life.

Attendee Wade McClanahan attended the academy this year for his second time.

“I liked learning more about sponsorships. Also, the group [of students] this year was great. They accepted more information and interacted more,” McClanahan said.

McClanahan also commented that there is always something different to learn at the academy.

“I learned this year that the reason I was having a right tear was my grip. The bow is shooting fine, but it’s me. It’s the little things that will get noticed and changed,” he said.

The 2016 Academy not only tackled indoor shooting, but also focused on preparation and strategy for field archery. The archers got the opportunity to shoot on the field courses that will serve as home for the 2017 NFAA Outdoor Nationals. Ryals and Gore, both experienced field shooters, lent their expertise with several of the groups.

Ethan King was also a second time attendee of the academy, but this year he contributed some of his 3D knowledge. Following a presentation from King, the archers shot the 3D course. King made his way to every group to assist them with their shooting.

Between seminars and shooting, the academy also included workouts. Dr. Amanda Adamson with Lewis & Clark Physical Therapy came in the morning for strength training exercises. Mark “Coach Rozy” Roozen, strength trainer with Avera Health, did a presentation on injury prevention and treatment, and recovery after competition.

“It has been awesome to see the progression of the Compound Academy each year. We practically have to kick the kids out of the facility at dark each night,” joked Bruce Cull, NFAA President. “They are squeezing every possible ounce of knowledge and experience from the coaches and their peers in these 4 days. By attending this academy, these kids are showing their commitment to compete at the next level. I know in the near future, we will see several of them competing at the Professional level.”

For Information about the NWTF go to https://www.nfaausa.com.