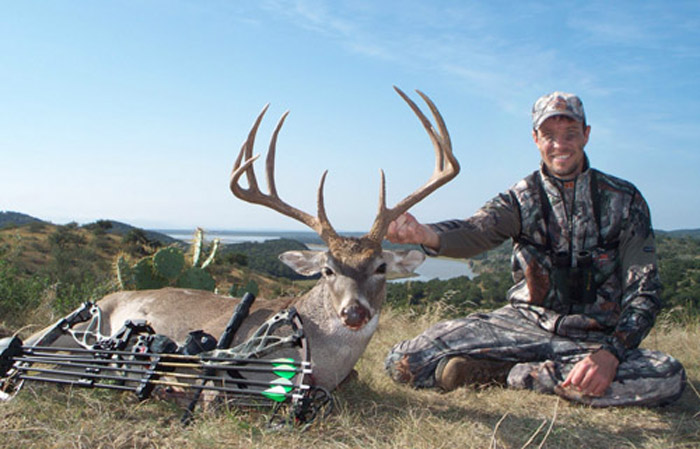 After 3 years the author finally puts this trophy whitetail down.

4 mule deer bucks were bedded 100 yards in front of me.  The shadows of a juniper concealed my position as I waited for them to begin their evening feeding pattern.  A neighboring crop field lay behind me filled with the tender wheat grass of October.  The dark canopy of cedar made a perfect ambush location and I was confident they would head in my direction at any minute.  With an arrow nocked, I waited patiently for them to make the first move.

To my left I heard the thrashing of trees. I assumed a group of wild hogs must be headed my direction.  Instead, a whitetail topped a ravine at 75 yards.  The 4 mule deer stood up in unison, and to my amazement, immediately left the area as if a bully had showed up on the playground.  The whitetail was ripping apart every bush in his path with his dark-stained rack, making sure everyone knew who was in charge.

I instantly recognized him.  The typical 8-point had eluded me for the past 3 years, walking by my trail cameras in the middle of the night and allowing only brief glimpses of him at long distances.  I had his sheds from the 2007 season when he was 3 ½ years old.  At 6 years old, his face was now scarred from battles and his bases were thick like soda cans.  After all these years of pursuit luck had finally brought him within striking distance.  I’ll take luck over skill every time.

The buck headed closer toward me but surprisingly bedded down next to a small mesquite tree.  Shooting at bedded deer is not ideal.  It can be difficult to be certain where the vitals lie, but I had a clear shot at him from a quartering away angle.  With a calm wind and a consistent distance reading from my Nikon range finder, I was confident I could make the shot.  I released the arrow and heard the unmistakable sound of my Swhacker broadhead meeting flesh and bone.  I felt certain the placement was correct but decided to give the animal plenty of time before beginning the search.  Anyone who has accidentally pushed a wounded deer knows that gut-wrenching feeling.  Best to be patient and give the animal time.  If my shot was correct it would be the first whitetail my family has taken off this west Texas ranch, which has traditionally been populated entirely by mule deer.

Due to overgrowth of brush of trees, this whitetail moved into ranchland that was traditionally populated exclusively by mule deer.  It took 3 years to finally get within bow-range of the wise, old buck.

There are varied opinions on how to manage land where mule deer and whitetail coexist, which is a common occurrence in parts of west Texas and eastern Colorado. Additionally, many are confused on the facts of mule deer/whitetail interbreeding.  Over the past 3 decades the state of Texas has conducted research on these topics to help landowners and hunters understand the facts.

With only around 500,000 mule deer in the state of Texas and over 4 million whitetails, most Texas landowners agree that protecting the valued mule deer herd is important.  Aggressively hunting whitetails as they expand their territory may help, but ultimately makes little difference.

Typically, whitetails prefer a brush density of around 75%, while mule deer prefer more open rangeland with brush density at 40%.  As the height and density of brush increases and grassland slowly becomes overgrown with trees and other cover, whitetail deer will migrate toward these areas while mule deer will migrate toward more open ground.  The best management technique for maintaining mule deer is to control brush overgrowth by clearing vegetation as needed.  Many arbological businesses offer brush clearing services that use large machines to grind trees and brush into mulch.

Whitetail deer and mule deer do interbreed, with whitetail bucks being the more aggressive pursuers of willing partners.  Research conducted by the Texas Parks and Wildlife Department reveals an 8 percent rate of hybridization in areas where territories overlap.  Hybrids have a limited ability to successfully breed and show inconsistent coloration and horn configuration.  However, they can be identified by the length of the metatarsal gland located on the outside of the rear leg about 8 inches above the hoof.  The metatarsal gland of a whitetail is typically ¾ of an inch long while the length of a mule deer metatarsal gland is 4 inches long.  Hybrid metatarsal gland length is in-between, usually around 2 inches long.

The next morning, I found my buck just a few hundred yards from where he was shot.   My arrow was true and it was a rewarding feeling to finally catch up to the wise, old whitetail bully. Judging by the way those mule deer bucks hit the trail when he showed up, they were probably just as excited as I was.

Don't Overlook Anything While Scouting