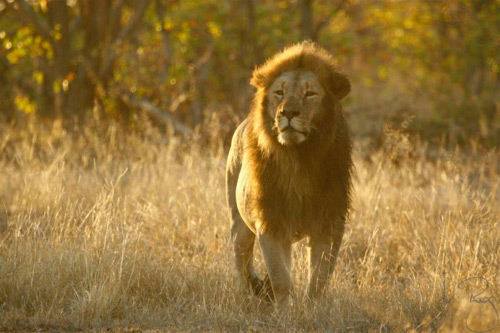 A wildlife reserve in Zimbabwe says it may have to cull 200 lions in the absence of hunters.

One of Zimbabwe’s largest wildlife reserves, the Bubye Valley Conservancy, recently announced that it was considering culling up to 200 lions as the cats have become increasingly overpopulated. The wildlife reserve said its current population of around 500 lions is unsustainable due to the dramatic decline in hunters, possibly caused by the controversy over Cecil, a lion killed near Hwange National Park last year. Bubye officials say that without hunters to help manage the lion population, they are considering either hiring marksmen to shoot some of the animals, or capturing them and donating the cats to other reserves. Bubye has historically held one of the largest lion populations in Zimbabwe.

“I wish we could give about 200 of our lions away to ease the overpopulation,” Blondie Leathem, the conservancy’s general manager, told the National Post. “If anyone knows of a suitable habitat for them where they will not land up in human conflict, or in wildlife areas where they will not be beaten up because of existing prides, please let us know and help us raise the money to move them.”

Leathem explained that the lions are a big threat to the park’s other denizens, which included antelope, giraffes, leopards, and a number of other native species. This problem is exacerbated by the fact that the conservancy is trying to recover from one of the driest summers on record.

Hunters traditionally helped to keep lion numbers in check, as well as bringing a much needed financial boost to the park. However, officials are now blaming something they call the “Cecil effect” for the lack of hunters. In 2015, the hunting of a black-maned lion named Cecil by an American dentist, Walter Palmer, drew international outrage after the Zimbabwe government accused Palmer of poaching. The charges were later dropped, but activist groups continued to target big game hunters in Africa and urged many governments, including Zimbabwe, to close their borders to hunters. This is despite the fact that many conservationists have long agreed that hunters are needed to not only manage wildlife populations, but also provide the funds to protect the same species they hunt.

Game species are not the only wildlife that hunters benefit. According to the Bubye Valley Conservancy, it is funds from sportsmen and women that allowed it to create its rhino conservation project, which manages the third largest population of black rhinos in Africa.

“Today, the hunters’ legends live again in the Bubye Valley, where populations of animals have had the time and the space to grow to maturity,” Bubye stated on its website. “Thriving herds live in balance on the open savannah, the mopani woodlands and in the dense riverine forests. The diverse habitats found in the Bubye Valley Conservancy now support an astonishing 35 species of wild, free-ranging game animals including the classic Big Five.”