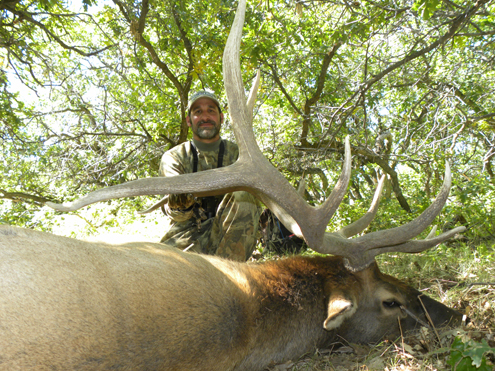 For years and years there has been a speed frenzy in the bow market. Now, I like speed and it definitely can kill, but speed has led to another wrong focus. That focus is one in which Kinetic Energy is the focus.

Kinetic Energy has been promoted as the end all of a bow set up for hunting. We have been told that if you have enough Kinetic Energy then you are good to hunt this or that animal. Kinetic Energy is really the Wrong Focus.

Wikipedia defines Kinetic Energy as “the kinetic energy of an object is the energy that it possesses due to its motion.[1] It is defined as the work needed to accelerate a body of a given mass from rest to its stated velocity. Having gained this energy during its acceleration, the body maintains this kinetic energy unless its speed changes.”

A more Archery oriented definition and description is found on Archery Report and states “The kinetic energy (KE) of an object is the energy of the object due to its speed and mass. In order for the energy of an object to change, work must be done on the object. In the case of an arrow and archery, work is done by the archer’s muscles by pulling back the string and flexing the limbs. The energy is stored in the limbs in the form of potential energy; when the string is released the energy stored into the limbs is released, most of which is absorbed by the arrow.

The energy not absorbed by the arrow becomes friction in the bow parts, noise, vibration and other inefficiencies experienced by the bow. Energy that is absorbed by the arrow is converted into multiple forms, the majority resulting in the forward velocity. The kinetic energy of the arrow that archers care about and calculate is the energy due to its forward motion. As the arrow travels downrange, the total energy diminishes mostly due to air.”

To calculate the Kinetic Energy (KE) of an arrow the following formula is used (also from the same article on Archery Report):

For an arrow, the kinetic energy is calculated by taking the weight in grains, multiplying it by the square of the speed in feet per second, and dividing by the constant 450800.

So much of modern archery focuses on trying to produce the highest KE and then the decision of a set up is made solely on this number. I have found through personal tests that I can get to a very high (over 90 and even over 100) foot pounds of energy number with a very light and fast arrow or a slower heavier arrow. In fact, in my younger and less educated days, I was able to get 92 foot pounds of energy out of a bow by shooting a very light and fast arrow. I was convinced this set up was the ultimate until I started shooting animals and wasn’t getting penetration on any shot except a perfect broadside shot. When this light, fast, and high Kinetic Energy arrow hit bone or any angled resistance in an animal my penetration was terrible. That year back in 1997 was the beginning of my study and desire to shoot the best set up I could shoot in order to kill the biggest animals on the planet in the most humane way.

So what was the problem with this lightning fast and light set up? After all, it had 92 foot pounds of Kinetic Energy so it had to kill anything it hit. Correct? My assumptions were very incorrect and as a result of that I spent a few years with a set up that was less than ideal. My assumptions were a result of an over emphasis on Kinetic Energy that was prominent in many archery shops around the states. I met a very high KE number, yet was ineffective in my ultimate game of harvesting big game in an efficient manner.

Then I heard this statement for the first time: If I throw a lead pencil at you at the same speed that I throw an equal size piece of all thread at you, which one will hurt more? Finally something clicked in my brain and made sense to me. I didn’t know it at the time, but this was now an observation of momentum and would forever solidify the light arrow vs. heavy arrow argument. In fact, what it did was cause me to start researching the perfect arrow set up for my bows based upon momentum while not completely ignoring KE, but just placing it in proper perspective.

Again from the article posted on Archery Report “The momentum of an object is the product of its mass times its velocity. Momentum is NOT a type of energy but it can be related to kinetic energy mathematically. There is a difference in terminology between the words speed and velocity. Speed is just a number, velocity is speed with a direction. For KE, either can be used and the resulting number, the energy, has no direction. Velocity is used in the momentum calculation because momentum is a vector quantity; or rather momentum is a measure of the speed of the object along with its direction, times its mass.”

And in the case of arrows:

So let’s put all this physics work into layman’s terms so that all of us can understand it. There are simple principles at work in the shooting of an arrow and of its downfield impact on an animal. The first thing we must realize is that there are two effects on an arrow from the time it leaves the bow until the time it impacts a target. The first of these is gravity and it works at the same force on any object in flight. That simply means that its effect is equal on any arrow that is shot. We can therefore leave that out of the effects because it is the same.

The second factor and the one we are going to use to determine our set up is also easy to understand. Air resistance is instantly against an arrow. The heavier an arrow is increases the time and force it takes to slow that arrow down. The lighter an arrow is the more impact air resistance has on it and it will slow down more quickly than a like arrow of heavier mass. So if we shoot two arrows of the exact same outside dimensions and one is a 300 and one is 500 (the 300 will be the heavier arrow) the 300 will slow down less until impact than the 500 arrow does. This is all about momentum. These facts started me down a path that I have applied to every bow I have shot since that time. I get on a chart that calculates momentum for me. There are many out there and even some apps, but here is one I found: simple calculator. I plug in my figures and then I play with the weights of the arrow and the speed. You also need a speed calculator. As you put in your factors from your set up it estimates the speed of the arrow based upon your changing numbers of weight. I continually put in other figures until I see that my momentum starts to drop. By doing this I find the set up weight that is most ideal to maximize my momentum. I also have observed that 9 times out of 10, my KE also follows suit closely.

Here is my most recent study. I am trying to set up an arrow for my Arena 30 from Bear Archery that I will be able to hunt all dangerous game in South Africa:

The arrow is a Black Eagle Arrow Rampage 150 which is 16.1 grains per inch. The broadhead will be a German Kinetics Silver Flame. My other choice of broadheads are those made by Grim Reaper.

The chart below shows how I made my decision.

Now that I have thoroughly muddied the waters with this example, let me draw some conclusions. To look only at Kinetic Energy in determining your set up is a crucial mistake that many archers make. The key reason for this is that speed and velocity differ. Speed is used in the calculation of KE. Momentum uses velocity which adds direction to speed and gives a more accurate assessment for the archers down range performance.

I look at momentum first. I then move the numbers around to see the optimal set up to maximize momentum. I then look at Kinetic Energy to just make an observation and FOC for more input and information to make the best decision. The last step for me is to actually shoot the set ups and test with practical penetration at different distances.

I am not an expert in any area of physics, nor am I an expert archer. I am a hunter who takes his art very seriously and wants to be able to maximize my effect to kill any game animal most effectively. That is what drives me to make sure my set ups are in the best position.

The Tale of Garfield