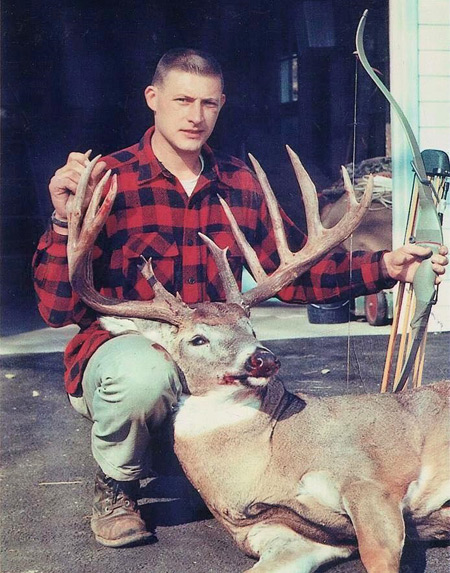 Now it’s 51 years and counting! Bowhunter Mel Johnson arrowed the current World Record whitetail on October 29, 1965 while hunting the edge of a soybean field near Peoria, Illinois. The buck’s 13 -point rack officially scores 204-4/8 inches and ranks among the largest deer ever taken by bow or firearm. Truly one of the best whitetails ever!

“A big deer appeared in the far corner of the soybean field 300 yards away, checked things out, and started walking in my direction. My breath caught in my throat at the sight of the large rack that swayed gently with each step. I suddenly realized that if he kept coming, he would pass directly in front of my makeshift ground blind. My hand gripped the bow.”

THE DATE WAS October 29, 1965. At the time, Illinois bowhunter Mel Johnson was about to write deer hunting history by tagging a World Class whitetail and World Record buck that still reigns as the best of archery’s best 51 long years later.

More than half a century after Mel watched that giant deer with massive antlers walking his way, people are still talking about his fateful encounter with the “Beanfield Buck.” Think about how many bowhunters have dreamed of taking such a buck and how many record class whitetail bucks have fallen to well-placed arrows. Millions? Hundreds of thousands?

Who knows or really cares? The fact is Mel Johnson’s deer has stood the test of time and remains the numero uno bow-killed buck of all time. That alone is testimony to the quality of an amazing animal. And even though odds are another giant buck will eventually break the record Mel established in ’65, it’s a safe bet no other (typical class) whitetail deer will enjoy such a lengthy reign at the top of the record book listings.

So what exactly happened the evening Mel stopped for a short evening hunt on his way home from work? Here’s Mel’s own recollections of the unforgettable Peoria County bowhunt that started when he slipped into a cluster of scrub oak trees, kicked away some noisy leaves, and knelt down to wait:

“The buck cautiously skirted the field’s edge, stopping to check for danger from time to time. The wind was in my favor as he moved nearer. After what seemed to be an entire deer season, the big buck stopped directly in front of me. My heart almost stopped as he turned his head and stared right through me.”

The distance between buck and bowhunter was no more than 10 yards.

“He was too close, really. I was pinned down, unable to move. A moment later, he casually turned his head with that massive rack and walked on.”

That’s when Mel raised and drew his left-handed 72-pound Damon Howatt recurve bow. Holding briefly and aiming instinctively, he released a MicroFlite fiberglass arrow—tipped with a hand-sharpened Zwickey Eskimo broadhead—and watched the shaft slice through the quartering deer’s midsection. The buck pounded away toward the middle of the beanfield where he disappeared over a small rise.

“I lost sight of him briefly as I automatically nocked another arrow. When I looked up, he was standing there near the rise, looking back in my direction. Then he turned and disappeared again.”

Mel followed, pausing only to pick up his blood-streaked arrow and replace it in his bow quiver. A few steps more and he could see the giant deer lying dead just beyond the rise. The field dressed buck would weigh 270 pounds.

THIS MAGNIFICENT BUCK’S ANTLERS had 13 points and an inside spread of just under 24 inches. Its official Pope and Young Club and Boone and Crockett Club scores were 204-4/8. It later would be officially proclaimed the Pope and Young Club’s World Record Typical Whitetail, earning P&Y’s coveted Ishi Award. It also earned the Boone and Crockett Club’s Sagamore Hill Award. Those two awards are the highest honors the two premier record-keeping organizations can bestow on any North American big game animal. Today the “Beanfield Buck” is displayed in Bass Pro’s King of Bucks collection, which includes the greatest trophy whitetails of all time.

Some 21st century bowhunters, many of whom favor compound bows, bowsights, rangefinders, total camouflage, and scent-free clothing, have expressed amazement that such a trophy could be taken with such antiquated tackle. Mel Johnson and those of us who began our bowhunting careers in the 1950s and 1960s—and follow in the boot tracks of the Thompson brothers, “Chief” Compton, Dr. Saxton Pope, Art Young, and other inspirational bowhunting pioneers, simply smile at such astonishment.

As for Mel Johnson, he’s a realist who understands that one day another giant whitetail will replace his Beanfield Buck as bowhunting’s best ever. He hints he’d rather not be alive to witness such an eventuality, but would accept it if he were.

“Every year there are rumors of a possible new World Record. But check out how many 200-inch typical whitetails have been taken with a firearm or hunting bow.”

Saying “a mere handful” or “not many” would be correct answers. And until Mel’s “Beanfield Buck” is displaced by a larger whitetail, long live the king!

The Birth of the Bow