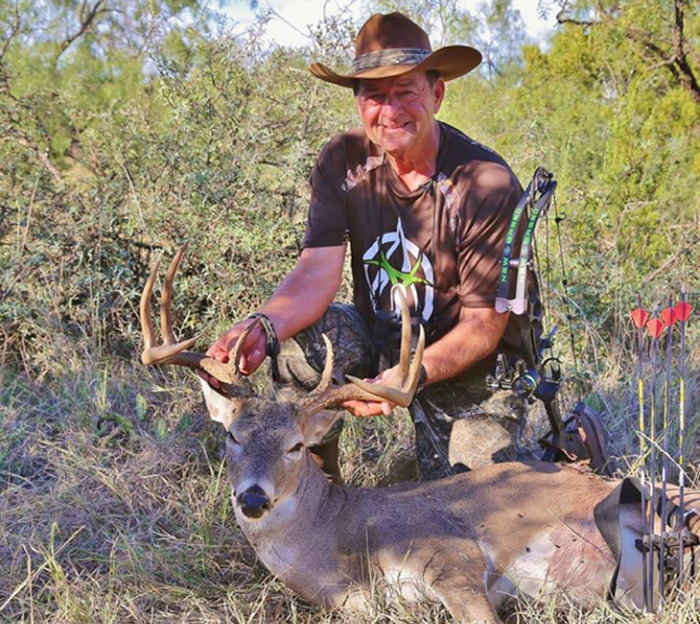 It all begins with hunting the right place and the patience to wait for the right buck to give the right shot.

Late one night, I was sitting in my office when one of those calls came in with no ID. I decided to take the call and it was from Ky McNett, Wildlife biologist for the famous, Bar None Hunt Company.  After visiting, we found out we knew a lot of the same people like my old Editor & Videographer Rusty Weed.  Ky wanted to know if I would like to film a hunt with the Bar None.  My answer came quickly, “Of course”. Who would not like to hunt one of the premier low fence whitetail ranches of Texas?  The next two months absolutely dragged by.

Finally, the date arrived for us to travel to the Tepee Ranch where we would be hunting where buffalo, antelope, whitetail, mule deer, and wild horses once roamed along with the Comanche Indians. In this Comancheria, were the ‘Pehnahner’ or ‘Honey Eaters’. Later the Spanish referred to this band as  the ‘Southern Comanche’  The Comanche domain was the broad Edwards Plateau with its high mesas in the west , southern and eastern timbered fringes  where they found the honey  that gave them their Comanche name.  This name, however was misleading as the principal food of the Pehnahterkuh, was the Buffalo.

Today this 20,000 acre low fence cattle, oil and hunting ranch is loaded with monster free ranging whitetails.  And I was going to be hunting it.

As we drove up to the ranch house Ky McNett, the Wildlife Manager and Tuffy Wood the Ranch Manager came out to meet us.  We did our introductions and then talked about the ground rules of the hunt such as; a buck has to be a minimum of five years old before it can be shot. They want their bucks to grow up and be able to meet their potential.  After a great lunch, cooked by Tuffy’s Dad,  Biu Wood we traveled to the first set-up along a food plot where we would be hunting that afternoon.  On the way we saw lots of mesquite, some cedar, hackberry, tasajillo and prickly pear cactus, huisache & acacia,  all natural foods with plenty of protein.  We also saw blue and bobwhite quail, cottontail and jack rabbits, javelina, and lots of deer heading.   The temps were in the high 80’s / NNW wind 14 MPH with peak game movement at 3:56 PM.

Before settling in our ground blind we sprayed down with Nose Jammer cover scent and within minutes we had a nice young 8 pointer come into the food plot and start feeding.  By 5:40 PM we had a flock of turkeys move to the feeder where they pecked up every grain of corn in no time flat and then moved off.

Not long after the turkeys left we had a huge 8 pointer come in. Ky noted this buck was a brother to the buck we were hunting.  Ky also mentioned this buck was off limits as he was only a 4 year old.

As we started to get into Magic Time, the last half hour before dark, the food plot was getting crowded with deer. We had bucks within 15 yards of the blind and none paid attention to the blind. The evening was moving quickly, lots of big shooter bucks in the food plot but none close enough to get a shot.   As the sun set behind a butte the sky lit up with beautiful colors.  We closed up shop and went back to the ranch for another huge meal.

There’s something about an alarm clock going off at 4:00 AM. That is when you realize that you spent way too many hours talking about whitetail deer and not enough time sleeping.  Ky explained that we were going to a different blind on top of the butte that the sunset behind last night. This area was great for bucks as they moved up off of the food plots, got a drink of water from a windmill and then bedded down for the day.

Sunrise turned into a fiery Rosetta of pinks, oranges, blues and purple hues. What a beautiful way to start our day. Once again, we saw lots of bucks, had some really good bucks that were most likely shooters but we also had a lone doe that was just plain goofy.  She would blow and snort at anything and everything.  We knew she couldn’t smell us so we figured she was just plain nuts.  As we watched the deer, Ky advised that the ranch had a 1 to 1 doe buck ratio.  I thought that was rare for a low fence operation as it takes a lot of work and constant management to keep that kind of ratio. 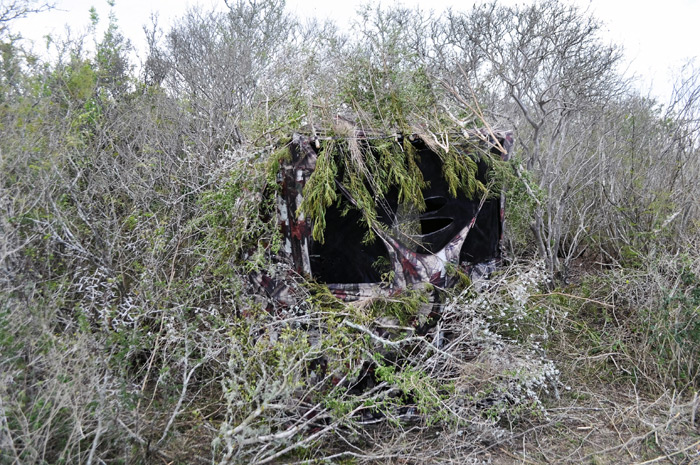 That afternoon, we went to a different blind and like before, deer were everywhere. We had bucks all around us including a nice 8 point downwind sniffing the air.   We knew he didn’t wind us because of Nose Jammer but he walked around behind the blind and actually put his nose against the wall he tried to push the blind over.  We were all thinking that buck was coming through the back door.  Eventually he got bored, turned around and walked off.

We hunted several different places after that hunt and just could not find the buck I was looking for.  Finally on my last day we went to an area that was in an oil patch.  We crawled into a blind that had been set up a couple of days before I arrived but had to walk right past a noisy Pump Jack. I was concerned  but Ky told me not to worry that the deer were used to the noise.  We settled in and when the sun broke over the mesas in the east, we saw we had deer all over us.  After 2 hours of deer walking around and hearing Ky say, “No, too young”  “No, too Big” I was beginning to wonder if the right deer would show up and give me a shot.

We were hunting an old 8 point management buck and finally here he came. He walked in, scent checking all the does that were feeding.  At 23 yards he gave me the quartering away shot I wanted.  I settled the HHA Sight pin on the back rib and drove that Victory 300 RIP through him. He never knew what hit him.   Everyone was excited, we had a great management buck in front of us, and I had made a good shot.  We waited about an hour and then blood trailed him for about 90 yards where I found my arrow drenched in lung blood.    After another 60 yards we found him piled up near a brush pile.  Everyone was happy that an old monarch had hit the dirt.  This was a nice 7 years old, 8 point and 129 5/6 inches.

If you’re ever interested in hunting with Bar None Hunting Company feel free to contact Tuffy or Ky to book your hunt.  I also know they book out quickly so if you want a Pope & Young buck this is the place to go.  Thank You Tuffy & KY for offering a great hunt and some interesting places where the Comanche’s lived in the old days.  To Book a Hunt with Bar None Hunt Company: