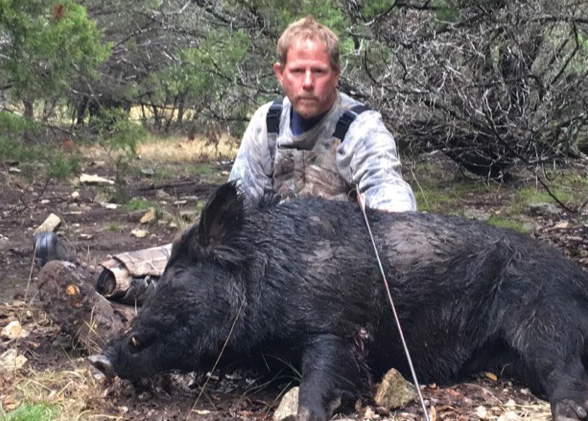 Robbie Beckwith Gets It Done, Again.

For 29 years, on our deer lease, the youngest bowhunter to put his tag on a whitetail deer was Robbie Beckwith. He was 12 years old back then. Four year’s ago the second 12 year old tagged a doe. And it was a first also, the 12 year old was a girl, and it was Robbie’s daughter, Kayla. The two of them came down a few days ago to bowhunt deer and wild hogs. Things turned out pretty good for them.

Robbie went to an area I call the Pocket and saw several deer pass through, one being a big racked buck at 45 yards. Robbie then moved to a food plot (now frost bitten). Again he saw a buck too far away for a shot. Then he went to one of my hunting areas I call the Hammer Hole. There are two tripods there and a plywood ground blind.

An hour before dark three wild hogs, all sows, took shape in the low hanging limbs of the thick cedar trees in this area. Robbie watched them come closer and soon they came out of the woods on a trail 10 yards from the blind. Robbie was ready to shoot.

Back further in the brush behind the hog trio Robbie saw a larger hog on the same trail. Robbie waited.

It was a good sized wild boar and it soon stepped out of the brush 10 yards from Robbie. The hefty, black boar turned and looked at the three other hogs. Robbie drew.

The boar was now broadside. Robbie aimed and released. The arrow hit in the ribs and all 4 hogs scattered. Robbie saw the boar disappear into the cedars on a nearby cross trail. The boar ran 45 yards from where it was shot and went down. Below is Robbie and his black wild boar. 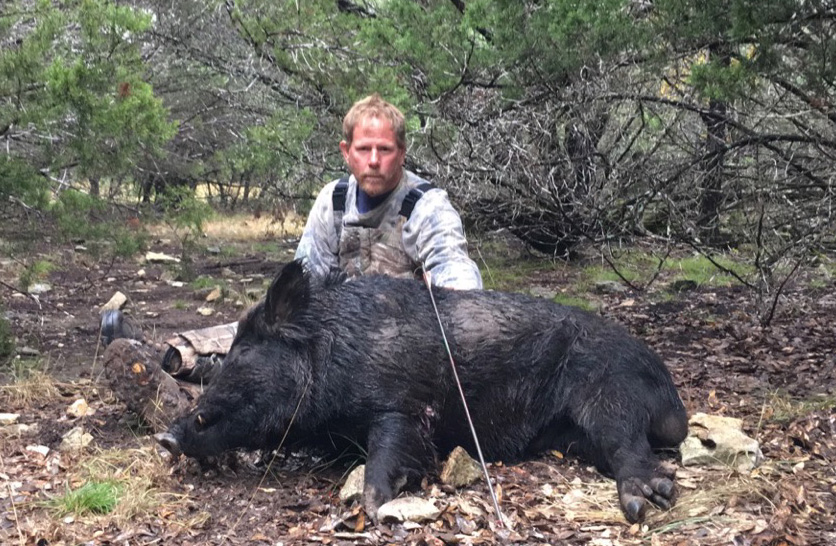 After the hog was butchered the Duck fried up backstraps (the pork chops) for breakfast. They were delicious.