by Freddie Rowland
in Bowhunting Posts
0 0
A A
1 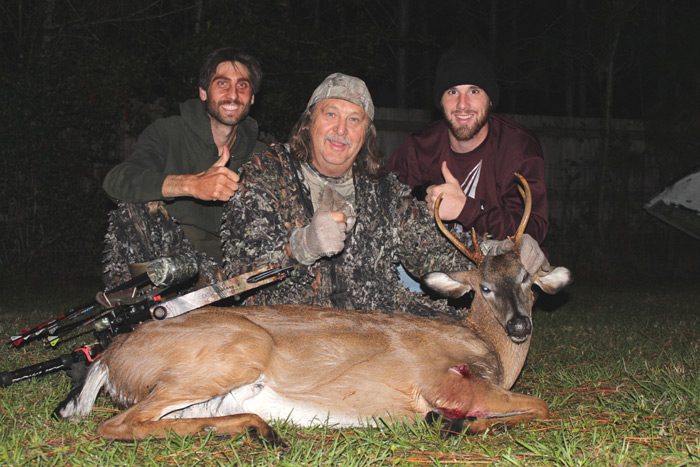 Author with Joe, Chris and his swamp buck.

Chris had helped me moved my stand deeper into the swamp a couple of days ago.  We knew it would be a tough recovery if I shot one in there because the swamp is flooded and the water starts a stone’s throw from my stand.  I’m in a Loblolly Bay Tree about 22 feet off the ground facing the swamp as the ground rises from the wet lands.  Palmettos to the left and right of me and a gall berry/palmetto thicket directly behind me sets the stage.  Viper heaven for sure!  We chose this spot because a huge Oak tree that fell during the last high winds took out a Sweet Gum tree allowing the deer to feed on the acorns right off the new banquet of greenery lying on the ground. They’ll also be munching on the top leaves of the Sweet Gum.

I slipped in one afternoon around 3:30PM and silently eased up the tree.   I was not sure which direction the deer might come from in this new area but I was hoping the small strip of dry land would funnel them within range.   The first thing I saw was a big raccoon walking the edge of the swamp, in and out of the water.  I lost track of him somewhere out front of me.  Next I saw water rippling and thought it might be him again but spotted 2 deer coming across the swamp directly toward me from the other side.   One was a really nice doe and the other was a smaller doe.  I took a couple of pics with my cell phone on silent and sent them to Chris.   They stood in the water eating leaves off the Sweet Gum for 10 minutes before moving up on to the dryer ground.  They were both within 12 yards of my tree when I heard another deer approaching from the south through the palmettos.  As soon as he got close I saw antlers and started figuring for the shot.   He was on yellow alert (as they always are) but settled when he saw the does.  The big doe ran from him but he didn’t chase.

He was on my wrong side (right side) for a shot and in the thicker brush with limbs blocking.   There were 4 small trees in front of me at 23 yards.  Two of them crossed forming a V shape and the other two were straight in between them forming an H with the V in the middle.  I needed him to be in one small window to try and get an arrow through all of them without touching anything to deflect my arrow.  I silently stood as he step by step approached that window.  I was losing light fast but finally his head and front leg were in the opening.  I needed him to take one more step as two steps would put his vitals back out of the shooting lane.  I came to full draw and hoped he would take that one last step.  When his closer front leg went forward, I locked on and touched off the shot.  With deer, I do not over think the shot because from my high position I instinctively know I must shoot way low on the deer.  If you think about it too long you will want to raise your pin to the middle of the deer instead of shooting them really low in the chest.  I shoot above the bottom of his brisket maybe 3 inches at best.  The arrow will be centered on the vitals.  If I aim for the center from my high position with the ground sloping away from me…I would hit too high.

At the shot he jumped the top of the dead fall Sweet Gum and ran parallel to the water for a few yards…I heard him snap my arrow off on the tree as he turned toward the water.   As usual, I was shooting Black Eagle Carnivore arrows tipped with Swhacker Broadheads, a lethal duo.     I spotted him again when he reached the big creek and he splashed through and then I thought I heard one more splash.  Then he was gone and all was silent.  I watched another deer cross the swamp….further north, probably one of the does.  I marked the last place I saw him splash in the big creek with a dead fall log laying near the water.  I marked it as well as I could since the scenery changes once you are back on the ground, especially in low light!

I gathered my pack and got out one small flashlight since it was getting dark fast.  (I always carry two)  I climbed down and left everything right there…Bow, Pack and took my drinking water and the light.  I found good blood where he was shot but I knew there was no reason to stay on it since it would be washed clean with his run through the water.  I cut the angle straight across the swamp toward the log.  Water went over my boots immediately, but I wanted to get there with as much light left as possible.  I crossed the big creek near where I last saw him and started scanning for any sign.  There was a small creek in front of me and I thought…IF I saw him with the log behind him……that means he was on this side of that dead fall.   I turned and walked back north a few feet and then started to cross the small creek because I knew I heard him splash again.  I was standing in the middle of the creek when I spotted something smooth looking in the water about 6 yards north of me.  I moved further back north and there he was, lying in the creek with my broken Black Eagle Carnivore arrow protruding from the exit side!   The first thing I did was Thank God as always as this could have easily been a lost buck!   I dragged him out of the water onto a small island between the two creeks.  The little cypress root island was maybe 6 feet wide and 12 feet long.   I sat down up against a tree and messaged Chris and most of you that are reading this that were with me via FB on this hunt. 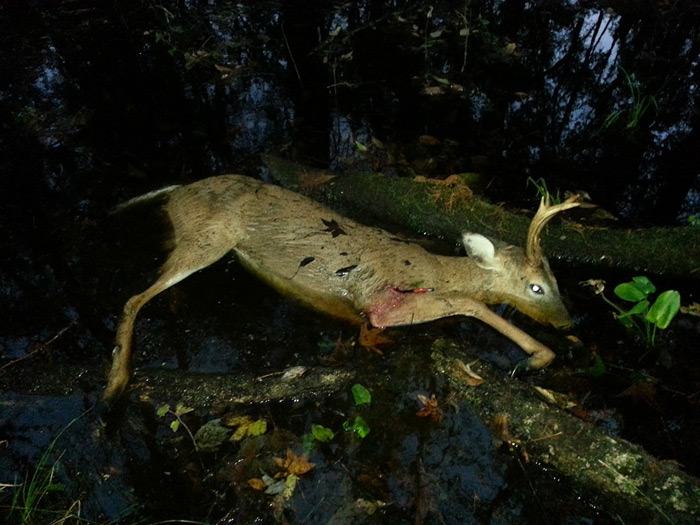 I messaged Chris to finish his hunt with any light he had left.  Often, the hunt isn’t over until the last couple of minutes of light.  Chris called his buddy Joe and asked him if he could help.  Of course his friend said yes despite the fact that he had a torn meniscus and was getting an MRI that week to determine if surgery would be necessary.  They got a couple of lights and a rope and headed my way.  They had a fairly long walk in since they cannot drive back to the swamp on the muddy road as it’s just too mucked up and wet.   It was well after dark before the guys got to the swamp.  They moved slowly down the edge and it was a good feeling seeing their lights coming through the swamps.  It is so dark in there at night that I could not see my buck lying a few feet in front of me without a light.  I had turned off all light sources including my cell since it ruins my night vision.  I had sat in the dark for the last half hour letting my eyes adjust in what we refer to as stealth mode.

Chris called me and said he was working toward my tree stand where he needed to get a better light from my pack.  I told him I was tracking them by their lights and I would signal when they were across from me.  They pulled my pack down off my tree stand and Joe put it on.  They left my Elite bow on a stump near the swamp edge by the dead falls I was hunting over.  They crossed the swamp and got within 30 feet of me on the other side of the big creek.  It was about thigh deep in the middle of the creek and there was no shallow place to cross so Joe threw the rope across to me and I tied it around the buck’s antlers and slide him into the water so they could pull him across.  It was a comparatively easy drag out since most of it was in water. I waded in, picked up my bow and headed out to get my truck since I could get closer to the swamp in 4 wheel drive.   They were out by the time I got back to the edge.  The rest was easy….pictures, processing and done!  It was a great hunt and kind of typical for bowhunting the Florida swamps.
Sponsored by: Black Eagle Arrows