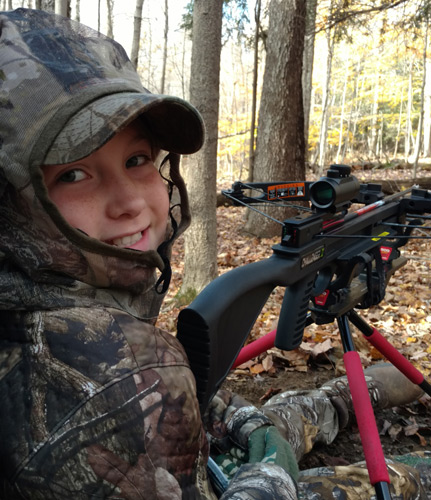 Young Abby, locked, loaded and ready for anything.

The Pennsylvania archery season was just picking up steam in the first week of November. My son, Samuel and I had been hunting hard every chance we could and were both seeing good deer movement and bucks searching for receptive does. Abby had taken a little break from hunting and was enjoying her after school girls club.

After watching the weather for the first week of November I mentioned to Abby that she might want to get back into the stand and take advantage of the pre-rut activity. She asked if I had any particular buck in mind and I told her that I had been seeing all kinds of bucks and chances were good she would see something she wanted to shoot. She said she would be excited to go out on Saturday evening and try to shoot a buck.

Sam and I hunted Thursday evening and each saw deer. I took Friday, November 4th off and was up early and on stand looking to put a tag on a PA buck I had been after. I saw many deer in the morning and felt good about the evening hunt. I actually moved my stand to take advantage of the land features and terrain.

Later that day Sam and I were ready to hunt 10 acres we were seeing deer moving through and Abby decided she wanted to hunt as well. This would mean that I was not taking a weapon and that she would be carrying the crossbow.

Sam went to his buddy’s stand not far from where Abby and I were going to be sitting on the ground where I had set my stand earlier that day. She was excited to be back in the woods and kept asking about the bucks I had seen. I explained we would need to be very still as we were sitting on the ground and that we would be at eye level for the deer. She said she would sit still like a rock. I laughed and we settled in for the hunt.

The sun was setting and Abby was scanning the woods. About 5:15 she turned, looked at me to ask a questions and her face went blank. I could tell by her expression she saw something behind me. “Dad, there is a huge buck standing behind you on that trail! ¨ I told her not to move and keep looking at the deer.  When the deer moves, look back the other way and I will see which buck it is.¨ I saw her head turn and peeked around the tree I was leaning against. Sure enough the buck about 40 yards away was the Big 7 point I had been after for two years.

The 140 inch buck was standing on the trail smelling the air. I had placed a few Buck Cages around us with estrus urine in them and he was taking in the smell. I was hoping he would close the distance and give Abby a shot. The buck turned to his right and headed up a trail that led to the hidden pond. I gave a soft doe bleat and he stopped and looked our way. He took two steps our way and stopped. Abby was shaking uncontrollably and I whispered for her to relax. The buck then turned and walked slowly into the thick mess of briers and brambles.

Abby had a huge smile on her face and said, ¨ I can’t believe we just saw that big buck.” My heart was in my throat as I knew I could have killed that buck with my bow had I been hunting! We laughed for a few minutes about how big he was and where he could be now. I caught movement out of the corner of my eye and told Abby to look up the hill. Coming our way was a half rack 3 point and I told Abby to get ready. She turned on her red dot scope and lowered the safety on her crossbow. The deer was closing fast within her 25 yard range. She was focused on the buck and I told her I would stop him in an open spot.

The half rack buck walked into some thick stuff and never gave her a shot. Abby sighed and turned her scope off and put the safety back on her crossbow. She turned to me and said, ¨ That was pretty close!” I smiled and said, ¨There is still lots of light left and the deer are on their feet. Keep watching out ahead of you.¨

No more than 15 minutes later I saw a deer coming up out of a draw. It was a young buck so I gave a doe bleat. This buck marched in my direction. Unfortunately for Abby she was sitting on the opposite side of the tree. This young 4 point walked right up to where I was sitting and stopped 5 feet away. I could hear him breathing as I looked down so he couldn’t see my face. He stood there for about a minute and just sniffed the air. The Nature´s Essence, Essence of Fall, cover spray we use was doing a great job. The buck then turned and walked back from where he came. I asked Abby if she could hear him breathing and she said, ¨Yes!¨ She could not believe how close he was and she couldn´t get a shot at him.

The sun was almost set as the 4 point walked out of sight. Abby and I packed up our stuff and walked, hand in hand, back to the truck. Sam met us at the truck and Abby was going a mile a minute about the Big 7 point she saw and how HUGE he was. As we drove back to the house, I listened to them ramble on about deer and who was going to be the first one to kill a buck. Before we arrived home, I asked Abby if she wanted to get up early and go hunt or just hunt in the evening. She wanted to hunt in the evening so she could sleep in and rest.

Sam and I were up early on Saturday, November 5th for the morning hunt. The weather was perfect. The temperature was in the 30? and there was barely a breeze. The deer movement started at first light as I saw 3 does feeding through the open woods. Not long after that I saw a small 7 point lagging behind the does. It was as if deer were coming from everywhere. I saw the same half rack Abby saw as well as a bunch of other does.

At 10:00 I saw a nice buck working the ridge top. I gave him a few grunts and a doe bleat and he turned, coming my way. I got ready for him to pass through some shooting lanes but he reached an area about 30 yards away and stopped. He was sniffing where some does had come in and lay down for a few minutes. He then stood, turned and continued my way. He stopped behind a tree at 25 yards and just stood there. He had his nose to the ground and was just sniffing one spot as I started to see things unravel. One of the does must have been getting ready to come into estrus and he was checking each bed. Nature took over though and he turned and started following the does.

Later, Sam and I met at the truck and talked about the morning. He also saw plenty of deer but none offered him a shot. We decided to go home, have lunch and plan the afternoon hunt. Abby heard us come into the basement and rushed downstairs to see if we had shot anything. Sam told her about the deer and the different bucks we had seen. After lunch I was thinking about how I could get Abby up off the ground for the evening hunt and keep her safe.

NEXT: Tagged Out: Part II