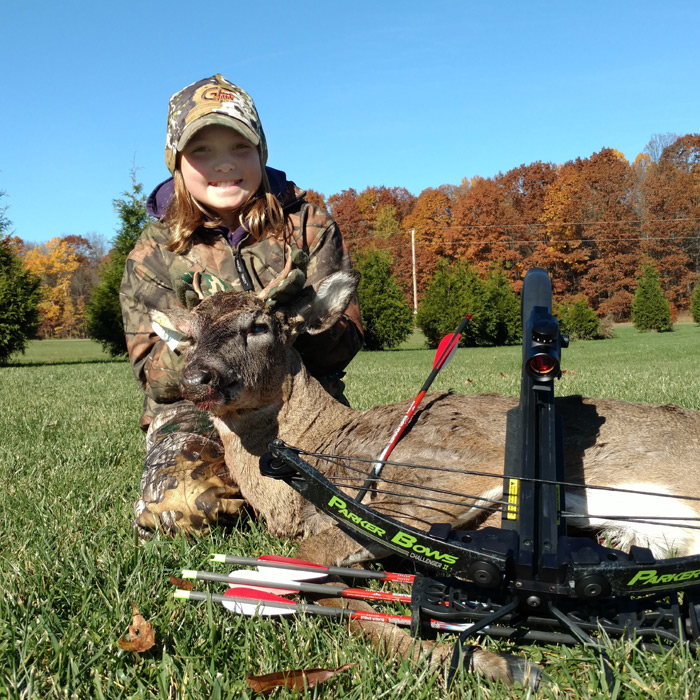 Abby is all smiles as she poses with her buck. She is happy, Dad is proud and the next generation of hunters is secure.

Continued from: Tagged Out: Part I

About 2:00 I gathered the kids and headed for the basement where I saw my Summit Climbing Stand. The lightbulb went off in my head. I had the way to get Abby off the ground for the evening hunt.

All of us sprayed down with Nature’s Essence’s Essence of Fall and packed our gear. I grabbed the climber and headed for the truck. Sam asked what I was doing with the stand and I told him Abby was going to hunt out of it that evening. Abby perked up and the questions started. “How do I get in that thing? How high do I have to get? Do I get to wear a safety harness? Can I shoot my crossbow from that?” I assured her it would be fine and that she would enjoy being off the ground a little bit. We got in the truck for the drive to the 10 acres.

Abby gave Sam a kiss on the cheek for good luck and we all went to our spots for the evening. Abby and I went we sat the night before and I strapped the climber on a cherry tree. I placed the base about 5 feet off the ground and top support above that. I lifted Abby up into the climber and showed her how to connect her safety harness. She was all smiles. Once secured in, I handed her the crossbow and went 20 yards away, made a mock scrape and hung a Buck Cage. I then returned to her and sat down beside her tree.

Abby and I talked for a few minutes about shots and distances. Everything was ready and we were set to hunt. Not long after I saw a buck working our way. It was a small 7 point and I told Abby to turn and get ready. The buck came out into the opening about 35 yards away. He needed to cut the distance by 10 yards. The wind was right and the buck was calm. He fed on acorns for a few minutes and then walked back the way he came. I was excited to see the deer were up on their feet again with lots of daylight left.

Abby relaxed in the climber as we watched for more deer. I noticed another buck up the hill coming our way. This buck was on the move, heading our way and quickly. Abby was facing the other direction so she turned to her right to see the deer. This was a nice basket rack 8 point, now within 25 yards. He skirted the group of trees we were in and never quit walking. Abby had been ready but he never stopped for a shot opportunity. She was shaking as she was sure he was going to give her a shot. I could sense some frustration after seeing all these bucks and not getting a shot.

It was 5:45 and would be getting dark soon. I whispered to Abby, ¨ Get ready, I see another buck coming our way.” This buck was a spike and was following the same path the 8 point had. Abby turned and watched the buck enter the set of trees where we were set up. Abby looked for a shot as I sat motionless on the ground. The buck stopped behind a tree at 10 yards and froze. He sniffed the air and looked toward the Buck Cage. He turned and started to walk away as I quickly grabbed my doe bleat and gave a call. He turned on a dime and came directly back toward Abby. I could not see the deer and wondered where he was and what he was doing.

I watched Abby as she focused on the buck until I heard the crossbow go off.  I looked around the tree to see the buck running through the woods with the Lumenok glowing brightly. Abby squealed with delight that she got him! I asked her about the shot distance and how the deer was standing. She said he was sniffing the Buck Cage and was facing her. I explained about her shot and that she probably only got one lung. She insisted the shot was good and that she had killed him.

Not so sure of the shot, I walked to where the deer was standing where I found a great blood trail. Still thinking it was a single lung hit I went back and told Abby that I would come back later to track the buck. She was not excited about that option but after I explained that we could lose the buck she was satisfied.

Sam met us at the truck and Abby told him the story about the buck she had shot. Sam had seen a few bucks as well but no shot. Both pleaded to come back out to get the deer. I told them they would be in bed since I was going to give it up to six hours.

At home, Abby told her mom about the hunt while we ate dinner. We watched some college football and then the kids got ready for bed. As I tucked Abby in that night she gave me an extra special hug and kiss and said it was for good luck to find her deer. I told her she had done a wonderful job and I was very proud. I promised to look very hard for her deer so it was there when she woke up in the morning.

After talking to a few good friends about the hunt, I decided to wait till about 11:30 before going out to look for Abby’s buck. I quickly picked up the blood trail and 50 yards into the tracking, I found the arrow. The Lumenok was still glowing bright and I used it to mark spots of blood. The deer was heading into a swampy area but the blood trail lead me another 150 yards to the dead buck. Abby had made a very good shot and he died quickly.

I said a quick prayer of thanks, tagged the deer, dressed him out and began to drag him back to the truck and home where I hung the buck and hosed it off. It was about 1:30 am by the time I went to bed. I was looking forward to Abby´s reaction when she woke up in the morning.

Early the next morning Abby came to our room and screamed when I told her to look outside. She wanted to see her buck right away so quickly dressed in her camo while I got her crossbow and met her outside. I lowered the buck to the ground and took some pictures. She smiled the entire time. Abby then helped me hang the buck back up so I could skin it and quarter it. She watched intently and asked all kinds of questions.

As we were finishing up the processing, my grandparents called. My grandmother was an amazing hunter herself and was thrilled to hear about Abby´s success. Abby is beginning to understand that being a hunter is more than just harvesting game. She understands that we are providing great food for our family and others in need.

GO HERE FOR: Tagged Out: Part I