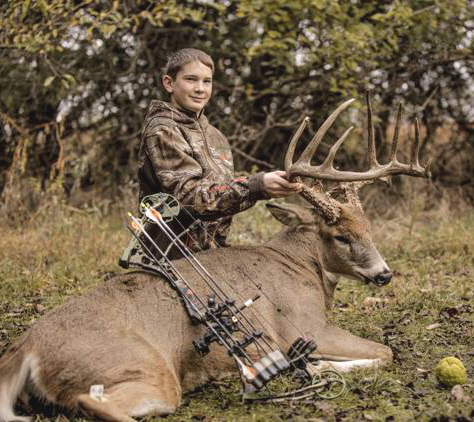 Where’s Colton?” Brad Geren of Windom, Kansas, asked his wife, Shari. “Downstairs I guess,” Shari replied. After not finding Colton there, Brad looked all around and didn’t see Colton’s truck. He decided if 15-year-old Colton hadn’t come straight home from football practice, he was probably sitting in a tree stand with his bow, hoping to take a trophy buck. During the fall, school, football and hunting trophy bucks totally consumed Colton’s time. Colton had hunted deer since he was 8 and had taken nine bucks with some scoring more than 150 on Boone & Crockett with a total of 800 inches of antlers. Brad called Colton’s cell phone, and Colton whispered, “Fish Hook won’t leave.”

“We had 3 years of trail camera pictures of the Fish Hook Buck,” Brad explains. “The buck’s right brow tine went straight up, turned down and then turned up again – causing the end of the antler to look like a fish hook. We’d decided Colton would hunt Fish Hook in 2015. But I’d reminded Colton we were getting pictures of Fish Hook only at the end of legal hunting time, and that he needed to wait until Fish Hook left before coming down from his tree stand to keep from spooking the buck.”

On that day, Colton started to climb out of his tree stand but spotted Fish Hook coming about 50 yards from him. “I remembered what Dad had told me and sat still.” Then on the phone, Colton heard his dad say, “As soon as Fish Hook starts feeding away from you, slowly and quietly climb down the backside of the tree and walk away from the tree.” Later Brad and Colton agreed they wouldn’t return to that tree stand until the first weekend after football season ended, since Colton played wide receiver and cornerback and was totally involved in sports in the fall.

The Second Hunt for Fish Hook:

On November 2, 2015, after football season ended, Colton returned to the same tree stand where he’d seen Fish Hook 2 weeks earlier. Brad went to another stand about 4-miles away, in hopes of taking a mature buck there. On the right and left sides of Colton’s tree stand were alfalfa fields. In front of and behind him was timber. This stand was near a funnel area where deer came out of a deep ravine to feed and then went back into some CRP land in the ravine where the Gerens thought the deer were bedding. Colton didn’t go to his stand that afternoon until about 4:00 pm. With only a few minutes to hunt, a doe came walking down a woods road about 20-yards away.

“When I looked behind her, I could see horns coming out of the thicket,” Colton remembers. “I grabbed my binoculars, looked at the horns about 80-yards away and then recognized the Fish Hook Buck I’d seen 2 weeks earlier. If the buck continued walking, I knew I’d have a 10-yard broadside shot at him. Once the buck was 30-yards away and behind a tree in front of me, I stood up and drew my bow. I already had ranged this tree, so I knew the exact yardage. My string began to creep as my muscles got tired. Finally, I had let down enough for the string to go over the breaking point of the axle on my bow, and the string jerked my bow hand forward. However, I was able to recover quickly before the arrow fell off the rest, and I got my bow back to full draw.”

The buck walked out from behind the tree, however, Colton couldn’t get the shot. Fish Hook moved again and stopped about 19 yards from Colton’s tree stand, quartering away from him. Colton put his pin sight on his Bear Anarchy bow behind the buck’s front shoulder and aimed a little high and a little back, so the arrow with his two-blade Rage  Hypodermic broadhead would go through both lungs.

The buck took the arrow, wheeled around and ran hard, back in the direction from where he’d come. As a veteran bowhunter who had harvested nine bucks in 8 years, Colton remained in the tree. He called his dad and said, “I shot Fish Hook.” Brad told him to wait a few more minutes, climb down and drive to their friend’s house on the property.

After hearing the news that Colton had shot Fish Hook, Brad explained, “I was so excited I went berserk. I called Shari and my 22-year-old son, Colby, and told them that Colton had shot Fish Hook. Before I could dial another number, I heard a buck grunt, looked toward where I heard the sound coming and spotted a doe and then a small 10-point buck chasing her. However, I saw the buck wasn’t a shooter. I probably was a lot more excited than Colton about his taking Fish Hook.”

The guys ate hot dogs at the friend’s home before searching for Fish Hook. A light blood trail was at the spot where Colton had shot Fish Hook and also the back half of Colton’s arrow. After following the trail for 150 yards, Brad Geren announced, “There’s Fish Hook.” The broadhead had hit exactly where Colton had aimed, penetrated both lungs and was stuck in the offside front shoulder of Fish Hook. “When I finally put my hands on Fish Hook, I couldn’t say a word,” Colton reports. “I was so excited that I was totally speechless.”

* Official Buckmasters’ Score: 179-5/8 (doesn’t include inside spread of main beams)