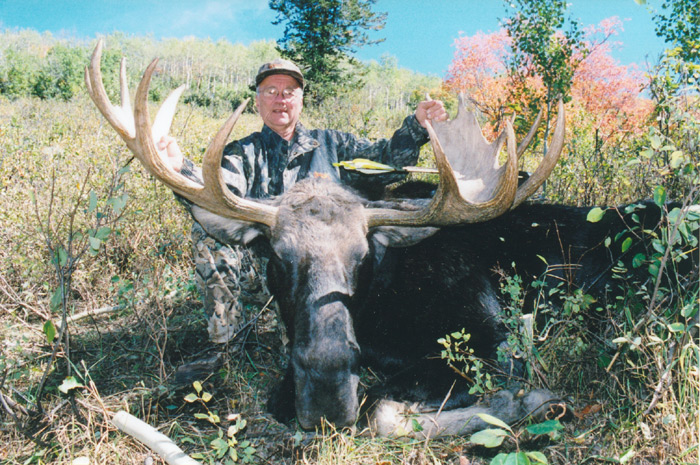 Moose were always on my wish list for a bowhunting adventure, but work prevented me from going.  No question, until later in life, cost was also a major factor.  In fact, even after retirement from my West Virginia University job, cost was a factor.  But I saved and decided to go for it.  Each year I’d put in for a Shiras moose tag for several Western states, but never got drawn.  I’d met a guide named Craig Mitton at one of the Pope and Young Club conventions and he had experience with Shiras moose in Utah.  Then a year or two later a friend from the Pope and Young Club told me about Craig’s Shiras hunts near Ogden, Utah.  He’d bowhunted with him the year before and saw a lot of bulls.  Although the bull he got didn’t make the book, his recommendation was very high.   He had nothing but praise for Craig Mitton, so I contacted him, liked what I heard, and put in for a tag.  But I’d already decided that if I did not draw, I would purchase one of the landowner tags that Craig had access to, and do the hunt.  When I didn’t get drawn, Craig called and noted that he could get two tags.  One was for $4000 on a ranch where he felt there were good bulls, but a second option was a $5000 landowners tag on an adjacent ranch where Craig thought we had a better chance for a bigger bull.  When I added up the air fare, guide fees, plus the $1000 license cost, plus the landowner tag, I decided that I might as well go whole hog and pay the extra $1000 to go to the best ranch.  At the time (2002), I’d been bowhunting for 50 years and this was by far the most expensive hunt I’d ever taken, and that included a number of trips to Africa.  It was expensive, but you only go around once in this life, so, with the blessings of my wife, I booked the hunt.

“There’s a bull Craig, do you see him?  Near the bottom of that dark ravine on the far mountain.”   Craig Mitton, my guide, quickly found the bull in his spotting scope and he got excited.  “Dave, that is a super bull, and my guess is that he is headed up the mountain to bed for the day.  Let’s just watch him for a while and maybe we’ll get lucky.”  The bull was two ridges away, but we watched him feed, make a scrape, urinate, rub trees, and finally disappear in a thick pocket of aspen and alder.  When he didn’t emerge, we headed back to the truck and drove off the summit.  Twenty minutes later we were at the base of the mountain where we’d seen the moose.

It was day one of a once-in-a-lifetime dream hunt for moose.  I’d met Craig at the Pope and Young Convention two years earlier and we talked about hunting moose in Utah.  Another Pope and Young member had hunted with Craig, and had good success.  Drawing a non-resident tag was just about impossible, so based on their recommendation I decided to buy a landowners tag through Craig.  Expensive?  Yes.  The price of the tag was a major concern, but the next three hours were going to give me a memory of a big bull that would last a lifetime.

It was late September, and after grabbing luggage at the Salt Lake City Airport, we headed for Craig’s cabin in the mountains northeast of Ogden.  The cabin was Craig’s family summer hide away, but it was also fairly close to good moose hunting.  Actually the ‘cabin’ was a great place to spend down time.  Very comfortable, with all the modern conveniences.  Craig’s wife Liz and brother Doug met us when we arrived, with a great meal, then shop talk to the wee hours.  Before dawn we were off to the local ranch to bowhunt.

Doug took a four wheeler and headed out one mountain ridge to spot while Craig and I drove his truck to the top of another to do the same.  After a short half-mile hike we were on a peak where we could see for miles.  “Dave, I saw six bulls from this peak three days ago, so I know we’ll see moose from here” Craig said.  He was right.  We spotted a small bull just at daylight, then saw some elk and mule deer.  Our great day was about to get better.  At 8:00 A. M., I spotted the big guy.

As we drove toward the bull, Craig explained that moose did not behave like deer.  “These bulls are not that spooky.  This ranch is huge and there are only two permits available, so these bulls are not pressured.  Sometimes they will take off, but if we don’t really stir this bull up, he just might move off and began feeding.  It’s common to get a second chance on a bull moose.”  His words would prove prophetic.

We met Doug at the base of the mountain and scoped the hillside.  Three quarters of the way up was the big pine that marked the thicket where we last saw the bull.  Craig and I grabbed a sandwich and started the hour-long hike up the mountain.  We eased along a well-worn moose trail that paralleled the mountain ridge and passed right by the thicket.  “There’s his tracks Dave, and here is where he entered the thicket” Craig whispered.  The wind was coming up the mountain, so our entry from above was perfect.  Even though we went painfully slow, thirty yards into the thicket the sound of antlers crashing brush indicated the bull was moving out.  I quickly back tracked then ran along the moose trail, trying to intercept him as he crossed heading up the mountain.  Craig’s whistle stopped me in my tracks, and none too soon.  The moose was coming out of the thicket, right below me.  I came to full draw as the bull stopped at fifteen yards, quartering to me.  I anxiously looked for an opening, but with his head lowered, it just wasn’t there.

After a few seconds the bull turned and bolted, running parallel to the trail.  I quickly followed and saw the bull cross in front of me.  He stopped at forty yards and I knelt frantically looking for an opening.  It was there, but overhanging limbs could be a problem.  I took a gamble and released.  The arrow deflected off a limb right in front of me and fell harmlessly to the ground.  As the bull ran off I thought the game was over.

Craig approached and reminded me of what he’d said earlier.  “Dave, that bull isn’t really sure what happened; my guess is he will stop and feed.”  We waited a bit then slowly moved out on the trail, and one hundred yards away, there he was, feeding.

We stayed on the trail, and soon were above the feeding bull.  He was busy eating leaves above his head, and my rangefinder indicated fifty-four yards.   Since he was facing downhill, I started a slow, quiet stalk.  The wind continued to blow up the mountain.  Perfect.  Five minutes later I was thirty-five yards from the bull, but he needed to move five more yards to give me a shot.  Within a few minutes he did just that, quartering away in a steep downhill position.  Without realizing it, my Parker bow was at full draw, aiming at one small opening through the brush.  White-fletched vanes make the flight of the arrow more visible and I thought I saw the arrow hit in front of the back leg, penetrating through the chest to the far shoulder.  The bull crashed off and then it got quiet.

Craig joined me.  “Craig, did I hit him?” I asked.  “I couldn’t see from my position.  Let’s give him twenty minutes and then have a look.”  Ten minutes later I couldn’t stand it, and quietly moved to the spot the moose was standing when I shot.  No blood, no arrow, and for five minutes we looked down the trail.  Silently I went back to where I shot and realized that we were searching too far to the right.

“He went this way Craig, we’re looking too far to the right.”  Right away we found his trail, hoof marks and then blood.  Lots of it.  Sixty yards down the trail there he was.  Craig and I slowly approached, and after a brief celebration, Craig put a tape on the spread.  “Dave, at 48.2 inches, that is the biggest Shiras any of my hunters have taken in my 20 years hunting here, gun or bow.” We said a prayer of thanks, and got on the radio to Doug to bring up the meat packs and saws.  Now the real work began, and after several hauls down the mountain, five hours later, the moose was at the truck.

Exhausted, we stopped to take in the evening.  The mountains were beautiful, the company great, and best of all, I had this great once-in-a-lifetime Shiras.  For me it was a dream come true.

My moose didn’t score all that well.  Although he was over 48 inches wide, which is very wide for a Shiras, his shovels lacked symmetry.  If you look at the photos, the left shovel (right as you look at the photo, but the left shovel on the moose) is long and narrow, while the right shovel is short and wide.  He lost a lot in these length differences, and lost four inches in width difference.  If you add the 17 inches of deductions he’d have been in the top 100, but instead he is somewhere in the middle of the record book.  The truth is that top five or bottom five, it doesn’t change the animal one bit.  He is a great animal that left me with nothing but positive memories.

As I write this book, such hunts are not getting any cheaper. A good Yukon moose hunt will now run you between $12,000 and $16,000, plus license and air fare.  Demand is high, success good, and guide quality excellent.  The fact that ten years from now such moose hunts may approach $20,000 is just a sign of the times relative to hunting away from home.  That’s sad, but it is what it is.

The Shiras moose is a subspecies that occurs in the mountains of Idaho, Montana, Wyoming, and Utah.  Actually the Utah herd has grown substantially over the past twenty years and is now quite healthy.  Permits are obtained via a draw system and in most areas permits are very limited.  In Utah, you can also buy landowners permits and the price varies, depending on supply and demand.  Most landowner tags go for $4,000 and up.  Late September and early October are prime times to bowhunt for moose in Utah.  No special equipment is needed.  The bow you use for white-tailed deer will work just fine.  I used a Parker bow set at 62 pounds, and 21/17 aluminum arrows tipped with a 3-blade 125 grain Muzzy broadhead.  For information on Utah Shiras moose, contact Craig Mitton, 487 W. 4050 N., Ogden UT 84414, 801 782-7756.