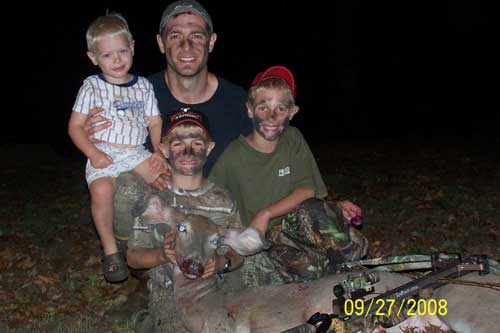 How did you get interested in hunting? How about bowhunting? I agree that the hunt gene is buried in each of us but what is the process to reveal it?

Have you forgotten the rush you had when the first deer walked within bow range. It was primal. The hunt was waiting to be released… by your proximity to a weapon (bow and arrow) and a whitetail you were connected to the long line of hunters who sat in front of campfires napping arrow heads and telling stories of the hunt.

It is who we are, but it has to be launched and set free. That’s where you come in. You see, it’s our job to launch (mentor) new hunters.

20 years ago I mentored my oldest son Reed into hunting. It stuck as did the time invested in my other son Cory. Then my beautiful daughter Bess decided that she would like to participate in the hunt. We spent a lot of time working on training and she is also a hunter. Then a funny thing happened…I ran out of kids. I was forced to go find another victim. The good news is that kids are everywhere! Fact is, if they haven’t been mislead by television and uninformed teachers, most would like to try hunting.

The challenge is that it takes a real investment by a seasoned hunter to show them the ropes. If they are not mentored in they will become golfers  and the world has enough golfers. Unlike many sports, hunting can’t be learned from a book. It is based on companionship and experience. As a matter of fact most would tell you that the hunting camp atmosphere is unparalleled across the spectrum of sports. It’s a relational intangible that creates the foundation beneath the hunt.

Hunting numbers are slipping nationwide. Only bowhunting has shown resiliency to this trend. It’s time we all do our part to build bowhunters. The following  is what I’m doing.   You are welcome to use it as a template for building your own bowhunter.

I have a nephew, Mike Olson who is 16 years old. He is a resident of a retrogressive hunting state…New York. In New York you can’t bowhunt whitetails until you are  14 years old and rifle until your 16. I think that age limit is designed to allow young people who are interested in hunting to get old enough to find other interests. States that understand hunting allow young people who are 10-12 years old to hunt with an adult. Some states DNR’s don’t use and age limit and it seems to work beautifully. There is no data that suggests that young hunters are involved in more accidents…actually the opposite is true.

Mike Olson’s dad is a non-hunter. He supports hunting but just doesn’t hunt, therefore Mike needs someone to mentor him into the hunt. I’m Mike’s uncle and my sons, Reed and Cory are his cousins and we are going to invest in him this fall and help him transition from a non to a hunter. I’ve also enlisted the help of a friend who lives near him in Jamestown NY. Ron Owens, a bow mechanic and Les Lyons who owns Pine Grove bow shop, which is only 20 minutes from Mikes house. Ron is part of my support staff as is the owner, Les Lyons. They are an important part of this mentoring process.

I also asked some of my friends in the industry to support Mike’s first year of bowhunting. Ross Reinhart of Bear Archery, who mentored boys of his own, offered to do the big part and gave Mike a “Bear Lights Out” bow complete with a Whisker Biscuit and Trophy Ridge sight. I like Bear bows (My Truth 2 is the most enjoyable and accurate bow I’ve ever shot) because they are made for the hunt. They are forgiving and practical for hunting. The brace height is always near to 7 inches because, they know like you should, a short brace height leads to fast and erratic shooting.

Now that Mike was getting equipped I arranged for Ron and Less to help him get his bow set up. Here is a bit about bow shops, I would not suggest that a new bowhunter buy his gear at a Mart. I always direct them toward a real bow shop where a real bowhunter will be setting up the bow. It is so critical that the draw length be perfect and the rest be aligned. The peep must be perfectly aligned and I recommend a kisser button to further insure that the draw is repeatable…even under pressure.

Mike was ready. Once the bow was set up it was time to shoot a few arrows. Ross provided Mike with a dozen Trophy Ridge arrows. I like the stiffness and the fact that they are a tough woven carbon fiber shaft. These arrows recover from the archers paradox faster than any arrow I have seen. This recovery allows the arrow to fly truer down range and deliver more kinetic energy to the target.

Les got Mike set up for his first shot and corrected his form so his bow hand was not a death grip and the first arrow flew. A defined group is all we are looking for at this point. That proves that Mike’s shooting form is repeatable. Now all we do is set the sight so it is aiming to where the arrows are flying. Remember, move the sight pin to where your arrow is going. Chase the arrow with the pin until they merge at the ten ring.

Mike saved his money and is coming to the Whitetail University/Bowhunting.net hunt in Ohio this year. Mike is getting closer to the hunt. He is looking forward to it. It took a few men I know who were willing to invest in the future of bowhunting. They did their part…now watch what happens.

In Part 2 we will discuss shooting at a deer target and deer anatomy.

For more go to: Bear Archery; Bows that will Hunt