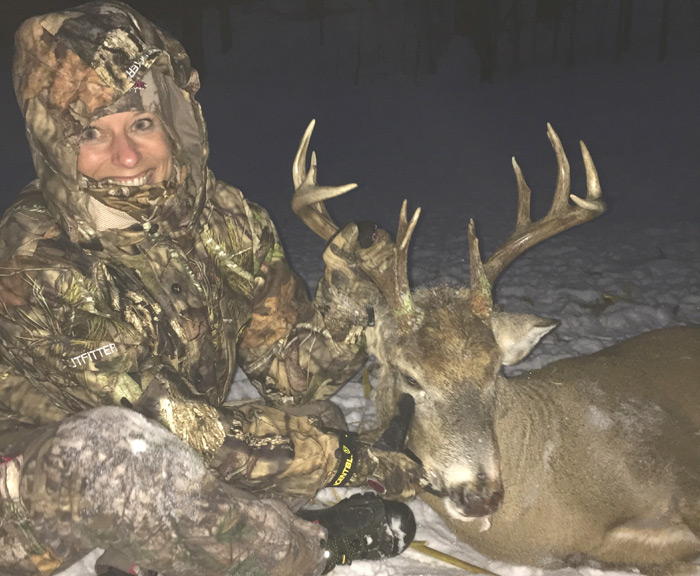 I couldn’t decide what to call this piece, and soon you’ll see why. Recently I got an email from ScentBlocker President Scott Shultz. Scott is a good friend, amazing person and most importantly, a dedicated family man. He was super excited about his daughter Kim’s (the ScentBlocker National Sales Manager) first buck bowkill. Here is the email from Scott.

“I know you’re doing an article on keeping warm while hunting in winter conditions. Appropriate here lately! (they live in frigid Minnesota) Not sure if you knew that Kimmie shot a very nice buck with her bow (after killing a doe an hour earlier) as she braved the cold and made a perfect shot to take her first buck with a bow… at honest -10 degrees. So in essence, Sunday, when darned few tough guys would ever ventured outside, Kimmie goes out from 1:00 PM until 5:00 PM and shoots TWO deer with her bow. The buck, a 13 pt., her first ever with bow, fell in the deep snow within sight from a perfect lung shot.”

“Thank you, it was an amazing experience! Oh my, it was so cold! Even the hot hands in my pockets made noise from it being so cold. Definitely a mental game to stay focused and not get discouraged from the cold!”

I asked Kim to tell me all about the hunt.

“Where I shot my deer in general is a rural area. More specifically, I was hunting a cut corn field that has regular traffic from does and recently, some nice bucks. I had planned to hunt that day well in advance of knowing we were supposed to get record cold temperatures. The closer it got to the day, the more I knew I had to really want it to go out in those conditions. I had everything laid out and prepared the night before. Washed, dried and scent free. When I got to my blind, it took a few minutes to get all the layers on. But I sure was warm.

I got out to my spot early afternoon, a frozen box blind. I warmed it up, then turned the heater off and opened the window. When it’s that cold out, everything makes noise and I didn’t want to risk scaring off any deer trying to open the window later. A nice doe had come in and I had a good opportunity at a shot, so I took it. She expired quickly.

Later in the afternoon a bunch of does were starting to come around. I was not nearly warmed up enough before I saw them starting to come in. I knew I had the potential opportunity to shoot a nice buck, so instead of warming up, I shut off the heater and opened the window. As soon as I saw him come into sight I immediately was impressed with how much character he had with his split tines. I was pretty cold at this point but knew I had to stay focused on the hunt and not focus on just being cold.

When the moment of truth came, it was so cold that when I went to stand up from my stool, the fleece on my pants was frozen to the seat! My frozen pants-to-the-seat made a squeak sound which then scared the buck and every other deer off. I had my bow in my hand and waited for almost 15 minutes for them all to come back. The buck returned near the end of the procession. I was watching him just out of range the whole time. Holding my bow for that long was really a challenge, it was like holding onto an ice block.

I had played the shot over in my head a million times before he was there. Finally he worked his way back, feeding into bow range. He stood just perfect, broadside, leg front as I drew back, aimed and released. My shot felt good.

I texted dad who was watching the action unfold through a spotting scope about a half mile away. I said “I shot a deer” and the immediate next line was “and I’m turning the heat on!” Hahahaha! I got a return text from dad that the buck was dead and that he did not go far. I was instantly overcome with emotion. I bawled. I have sincerely played out this event in my mind for 3 years and having it happen in real life was like a dream. I was shaking so bad I could hardly get the match out of the bag to light the heater. I was so full of emotion. It had really finally happened! It was as important to me that I made a good, clean shot. The whole thing was an experience I will never forget!”

As you can see now, this piece has two appropriate titles. And regardless of the title, CONGRATULATIONS Kim and Scott! From all of us at the ScentBlocker team.

Trophy Taker Intros Must Have Products for 2017

Trophy Taker Intros Must Have Products for 2017

Crossbow Shopping: What You Need To Know