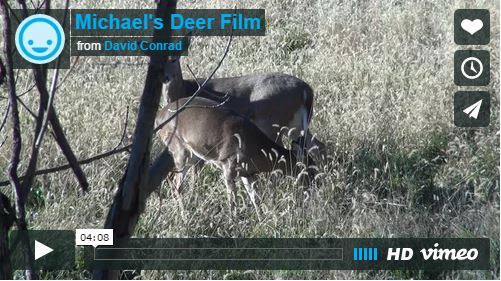 My son, Michael, has been deer hunting with me since he was 7 years old and has taken a number of deer with a crossbow and muzzleloader.  Hunting the Ohio rut usually runs the second week of November and this year, 2016, was no different.  On November 12th, we slipped into the stand about a half hour before daylight, more than enough time to get settled in, including my camera arm and camera.  I was hoping to film my son, now 12, taking a buck this morning.  There were a few nice ones in the area including a real nice 8-point. However, movement was slow and by nine o’clock we hadn’t seen a deer, which is unusual for our Ohio property.

A couple minutes later with a southwest wind blowing in our face I turned to see two deer approaching down the field edge from the northwest.  My son was only interested in taking a buck that morning and he once again confirmed his decision when I made him aware of the approaching does.

It was then that Michael turned and whispered that he would like to try his luck filming me trying to harvest one of the does.  Since the morning action was slow I agreed and with the deer 60 yards away he turned the camera on.   I continued to scan the surrounding field edge and wood line below us in hopes a buck was following the does.

It took the does approximately 15 minutes to make it to where the larger of the two offered a quartering away shot.  Only issue is that when I came to full draw, the large doe decided to stop right behind the smaller.  I held at full draw for 45 seconds until I was finally given a clear shot.

Michael quickly assured me that he had the doe in the center of the frame and gave me the green light.  At the release the 410-grain arrow was speeding on it’s way to the target.  The broadhead entered midway on the left side of the ribcage and angled up exiting just behind the right front leg.  Michael spun the camera following the doe, catching her exit until the side of his treestand prevented him from capturing her collapsing a mere 10 yards further out of the picture frame.

I asked him if he had captured the pass through and her flight and he eagerly nodded.  We quickly reviewed the video to see how his first recording looked.  I was really impressed with his panning ability, capturing the surroundings and very proud of his initial job of running the camera.

One of the first scenes showed how he captured a small bird, a titmouse, in the foreground pecking on a piece of corn for a mid morning snack.  I was also proud of the way he zoomed out to capture my bow in hand with the deer in the background.  He was also able to capture the familiar call of a Blue jay just out of the frame, seconds before the arrow was released.

As we were reviewing the video our attention was no longer focused on the hunt, and wouldn’t you know it, a buck suddenly appeared, and caught our movement.  He wasn’t quite sure what we were but cautiously passed our stand at a safe 60-yard distance.

I hope you enjoy the video of Michael’s first attempt at filming.  I think you will find he did an excellent job and he hopes to capture many more in the near future.

The Hunt for Shorty