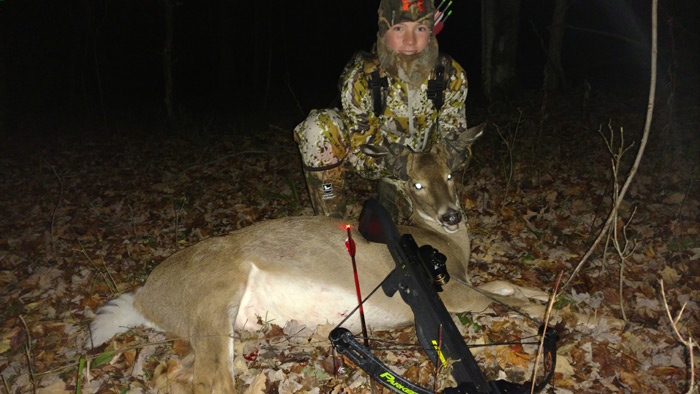 Happiness is a child, in a stand with his Dad and a deer down.

In Pennsylvania you have to be 16 years of age to hunt on your own. Having a 12 and 10 year old, who love to hunt, was a small problem this year. It is a good problem to have as both of my kids love the outdoors and spending time with dad. I spent a great deal of time during the 2016 archery season hunting with my daughter, Abby, as she was in pursuit of her first buck. My son, Samuel, who is 12, was gracious enough to allow his sister to hunt many of the days. Samuel loves to archery hunt and has killed a few deer already with his compound. So he was happy with staying home and letting Abby hunt with me.

Abby was able to tag out with a doe and a spike buck not long into November. We had a great time in the woods together and Abby loved telling Sam all about her hunts. Sam was starting to get anxious that the season would be over before he got a chance to be in the woods. He would shoot his bow weekly just to practice for that opportunity at a deer with his Mission bow.

With Abby tagged out, Sam was ready to hit the woods and the pre-rut was just kicking into gear. Since Sam is a junior hunter, I was able to carry my bow as well so we were both able to hunt. Sam and I sat in the double stand on the 100 across from our house on the first night we were able to hunt together. We hooked up our Treestand Wingmans and climbed into the stand at about 3:30 and prepared for the evening hunt. 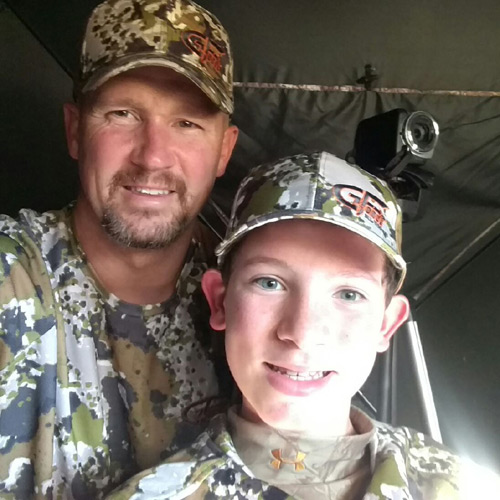 The weather was great for the first week of November and the trail cameras showed deer traveling the funnel we were watching. At 4:15 we both spotted a few does feeding in the bottom working their way up through the funnel. I told Sam to get ready if he wanted to try and kill a doe. He told me he was looking for a nice buck to kill with his bow. I wasn’t going to press the issue so we watched as the does feed to within 15 yards. I was tempted to shoot a doe but didn’t want to mess up his first evening hunt.

The does fed away toward the cut bean field. At about 4:50, I could hear something walking toward us. Sam and I looked to our right and there was a single deer walking our way.  It was a spike that I had seen a few different time while hunting with Abby.  Sam said he wasn’t going to shoot a spike on the first night. We sat there the rest of the evening and talked quietly about school, soccer and other hunting memories we have shared. As the sun was about set we safely climbed out of the stand and headed home.

Many of the states around Pennsylvania have an archery season that runs up to their gun season. In PA, the archery season comes to an end two weeks before the rifle starts. This meant Sam only had about a week and a half to archery hunt. With 2 soccer practices a week and games on the weekend, his time was very limited. We headed out to a new stand just up the road on a small 10 acre tract that many deer travel through each day. We got into the stand at about 3:30, but with the time change it was going to get dark a lot quicker than usual. I hung some Buck Cages filled with Nature’s Essence Doe Estrus while Sam go into the stand. After he climbed in, I made my way up, too.

Sam placed his Black Eagle Carnivore onto his string and readied himself for the evening sit. We had not been in the stand long when we heard a deer running toward us from the direction we walked in. I told Sam to stand up and get ready incase it was a buck. I could see the deer closing the distance quickly and it was a small buck. As the buck got closer I could see it was a half racked 2 point. Sam saw him as well and said, “ I am not going to shoot the half rack!” He sat down as the buck passed behind a tree and we watched as he walked to the Buck Cage and sniffed it. The buck stopped for about 30 seconds, enjoyed the sweet aroma of estrus doe urine  and then walked away. The light was fading fast and the deer were moving. We saw about 10 deer that evening and most were does being dogged by small buck. Nothing else came into bow range that evening as Sam has a 25 yard max with his bow, so we slowly made our way out of the stand and back home.

That evening at dinner Sam was telling Abby about all the deer we were seeing and how they were out of his range. Abby said, “Sam, why don’t you take my crossbow and use it!” Sam thought for a moment and then asked me if he could use Abby’s crossbow. I told him he could use whatever he wanted for the next evening hunt. Abby was excited that Sam was going to be using her crossbow and the Black Eagle Executioner bolts tipped with the Grim Reaper 3 blade head. I tucked Sam in bed that night, and told him we would be able to go again in two days. He smiled and said, “I think shooting Abby’s crossbow will be fun!”

On the evening of Friday, November 11th, Sam and I walked cautiously into the 10 acre stand. The weather was perfect with a slight west breeze and temps in the 40’s. Sam was excited and full of anticipation for the hunt to begin. It was about 3:30 when we got to the stand. I told Sam I would hang some Buck Cages since the wind was perfect for this stand. He stopped before he climbed up the ladder and asked if he could put a Buck Cage on the main trail we walked in on. I had no issue with him putting a Buck Cage on the trail so he broke off a stick and placed it in the middle of the trail just 10 yards from the stand. I gave him an estrus filled Buck Cage and he hung it on the stick and we climbed up the stand and loaded the crossbow. I wasn’t sold on the idea of having the Buck Cage that close but Sam wanted it there. I said, “What the heck, we have nothing to lose!”

I don’t believe we were in the stand for more than 15 minutes when I saw the first deer walking in the woods to our left. It was a doe,  80 yards away angling toward us. I nudged Sam and told him to be ready. The doe got bigger as she closed the distance and I could see she was a mature doe. I was shocked she was on her own without fawns or a big buck behind her. Sam said to me, “Can I shoot that doe if she comes in close enough?” I shook my head ‘yes’ as the doe was closing quick.

This doe was on a mission and she closed the distance in a matter of seconds. I watched as she climbed the small rise in front of us and came onto the main trail. She walked directly up to the stick with the Buck Cage and stopped to smell it. By this time, it was too late for her and Sam had fixed the crossbow on her. Sam slowly pulled the trigger and the Black Eagle Executioner bolt disappeared behind her front shoulder. The Grim Reaper head blew through her quickly, she kicked and began to run down the trail. We both could see blood coming from both sides and she crashed 30 yards away. Sam had an enormous grin on his face and gave me a fist bump.

“Dad, did you see that? She stopped right at the Buck Cage and I made a great shot! Can we get down and see her?” I told him it was still early and we should watch for a buck. We sat there for the rest of the evening and watched a few other does come to investigate the Buck Cages but not one buck gave us a visual. We climbed out of the stand as the last light was fading across the sky. We trailed the deer for practice and found her only a short distance from the stand. Sam tagged her and we quickly headed out of the woods. Sam had soccer practice at 6:00 and it was already 5:15. I told him it was already 30 degrees so we could get Abby after practice and all go together to drag her out.

At practice, Sam told all his buddies about his doe hunt and was so excited to have harvested the big doe. After practice we headed home and changed clothes so we could go get the doe. Abby came along with us and we showed her the doe and then all worked together to drag her back to the truck. I field dressed the doe as they watched and asked questions. We loaded her into the back of the truck and headed home to wash up and relax.

Sam was excited for his mother to get home so he could retell the story to her. This was the first deer he had killed in two years. The last deer was a six point with his Mission bow. He told me he enjoyed shooting the crossbow, but he prefers to hunt with his compound. I told him he could hunt with whatever makes him happy. Now we have to get ready for the PA Rifle Season in two weeks.