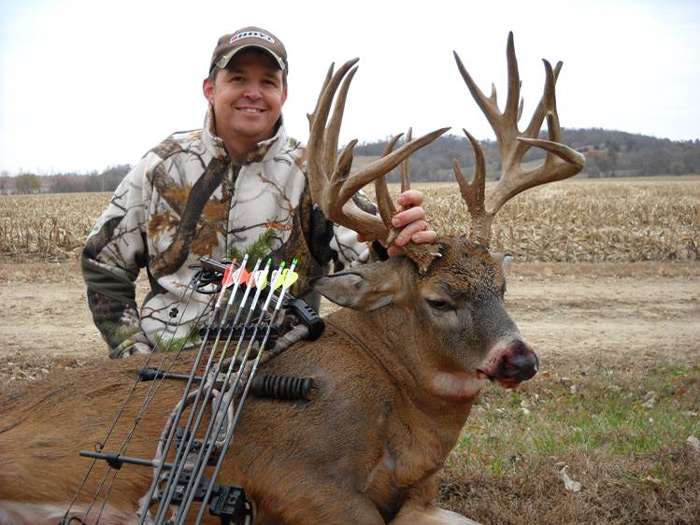 “That’s Megatron,” 9-year-old Kole told his dad, Jody Franken, of Bendena, Kansas, as they looked at the only trail-camera picture Franken had of a monster deer he’d seen originally in 2012 and named Megatron. The huge buck had come to the top of a ridge with a doe about 200 yards from Franken’s tree stand but didn’t move to within bow range. “After deer season in 2012, I scouted the property for the sheds from this very big buck,” Franken recalls. “I never did find any. I kept trail cameras out on all three of the small farms I hunted and never got a picture of this buck until the week before Halloween, 2013. That’s when I showed the trail-camera picture to Kole. My favorite week to deer hunt in Kansas always had been November 8 – 13. I took the entire week off to hunt Megatron.”

Since Megatron’s picture was taken at night, Franken, a 25-year deer hunting-veteran, wasn’t sure if the buck only moved then. On Veterans Day, November 11, 2013, before daylight, Franken walked to a pinch point on a ridge on the 160 acre farm where he’d spotted Megatron. Only about 10 acres of the 160 acres was wooded, but the ridge dropped down into a creek running through the small hardwood bottom. The rest was corn and soybean fields. Franken climbed into the stand before daylight in 20-degree weather.

“A light wind blew as I sat on the edge of a bluff with a creek coming down the mountain behind me and the timber in front of me,” Franken explains. “I heard water splashing and then spotted a deer, coming toward me from behind my stand. The buck shook off the water like a dog. I knew he was big, but not how big.” Then Franken recognized the deer moving to him as Megatron. Megatron worked a scrape on the edge of the water – about 60 yards on the back side of Franken’s tree stand.

“The morning was still and quiet as I watched Megatron and then heard leaves crunching and does moving down the ridge to the front side of my stand,” Franken recalls. “I turned my Primos Long Can Estrus Bleat call over one time and watched the buck.” The buck perked his ears up, looked in Franken’s direction and spotted the does walking in the leaves. The does next moved to the south, and the buck walked toward them to intercept them. Then the does turned and moved to the east, and the buck adjusted his route of travel, walking away from Franken.

Although Megatron was on about the same level as Franken on the ridge, he was too far away for a bow shot. Franken grunted with a tube, causing Megatron to bristle up, lay his ears back and walk stiff-legged down the trail in front of Franken’s tree stand. Franken held his shot until the buck was 8 yards away. He had his Hoyt Vectrix bow at full draw with a T3 broadhead made by G5 . Franken settled his sight pin right behind the buck’s front shoulder and released the arrow.

“Since I shot a Lumenok, I could see the flight of the arrow as it hit the buck and dug into the ground on the other side of Megatron,” Franken says. “With a clean pass through, the buck went 30 yards, stopped and tipped over.”

Franken had stayed fairly calm when he saw the buck until Megatron tipped over. However, after the shot, Franken’s hands were shaking so badly he couldn’t even text on his cell phone. His legs were shaking, and he knew he couldn’t stand up. As Franken remembers, “I had a severe case of buck fever after I saw Megatron on the ground.” Unlike most hunters who experienced buck fever, Franken didn’t get that blast of adrenaline until after he saw Megatron down and realized he’d taken the buck of a lifetime. While trying to regain his composure, Franken remembered first seeing Megatron in 2012 with his antlers backlit as he stood on the ridge with a doe. He’d told his buddies then, “I saw Booner (a buck that would make the Boone & Crockett record book) today and named him Megatron.” Franken’s friends laughed at him.

“Then on that day in 2013, I finally climbed out of my tree, retrieved my arrow and walked straight to Megatron,” Franken remembers. “After I put my hands on Megatron’s antlers, I called my dad, asked him to go by my house and pick up my son Kole, because I knew he hadn’t left for school yet. I wanted him and my dad to see Megatron and help me get the huge buck out of the woods.  Kole and my dad were very excited when they saw how big Megatron was. They helped me field dress the buck and load him up.” Franken assumed that the buck would score in the 190s but was pleasantly surprised when the 19-point buck officially scored much larger.

After taking Megatron in the first daylight hours of Veterans Day, November 11, 2013, on Veterans Day, 2014, at daylight, Franken was again in a tree stand but on another farm 5 miles away from where he’d taken Megatron. His hunting partner texted him and asked, “What kind of buck are you planning to take?”

Franken texted back that he’d never shot a drop tine buck. Later that afternoon Franken took a 150-inch buck with an 8-inch drop tine on his rack. Franken explained he’d never seen a buck in the woods with a drop tine. This buck was about 7 yards from Franken’s tree stand when he shot him and watched him fall not 30 yards away.

“I couldn’t believe I got both bucks on Veterans Day, a year apart,” Franken says. “Both bucks were less than 8 yards from my tree stand when I shot them, and each buck only went 30 yards before falling down.”

* Official Buckmasters’ Score: 197-7/8 (doesn’t include inside spread of main beams) 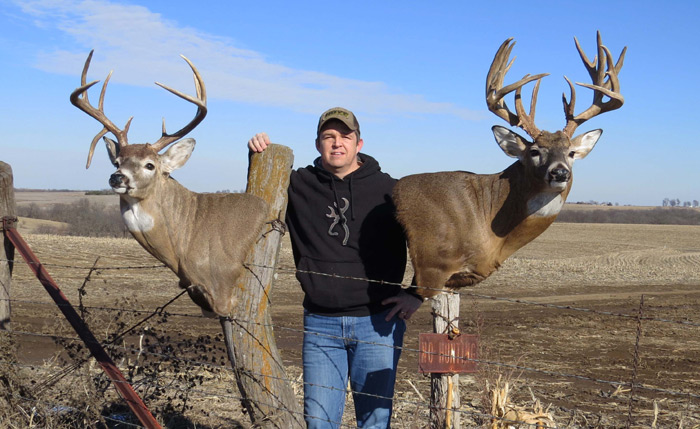