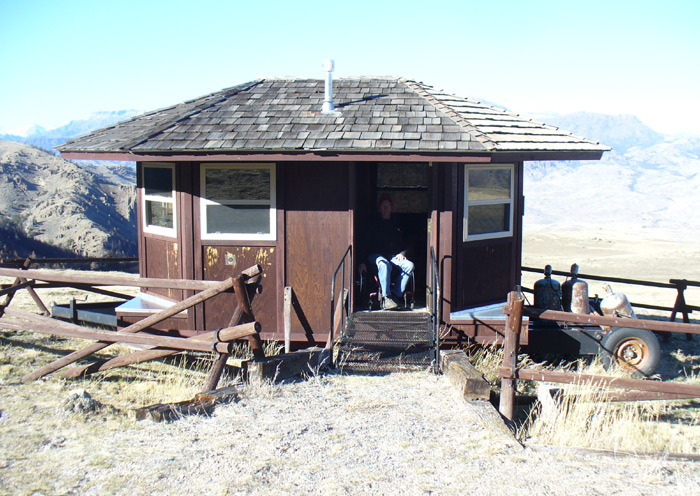 Now this is a ground blind.

As I was rolling through the aisles of the 2014 Archery Trade Show, someone shouted at me to come over.  I made my way to his booth and met Marion DeBusk who told me about an organization in Wyoming that has hunts for disabled hunters. I guess my wheelchair gave it away. The group, *Wyoming Disabled Hunters provide elk, deer, antelope and bear hunts for disabled hunters. Marion gave me details on how the WDH works and how I could apply for a hunt.  I couldn’t wait to get back home and get on  my computer and check out their website.  I downloaded an application, filled it out and sent it in.  These are draw hunts so an application needs to be in by April for the drawing in May.  Not having shot an elk yet I thought this is the one I would apply for.  Due to the many applications I knew they got, I figured my odds of drawing one was low.

As luck would have it,  in June I  got a call from president WDH Cory McGregor telling me I had been drawn for a rifle cow elk hunt in November in Cody, Wyoming.  Wow I beat the odds and was going to have a dream elk hunt. Then came all the planning.  How was I going to get there? Who was going to accompany me? What did I need to take and several other details?  My wife went with me on an antelope hunt in August so she could not get away.   I kicked around some other ideas of people that might go but then I thought, maybe my 13 year old grandson Reyden could go.  He would have to take time off of school but he had good grades and his parents gave him the okay.  Well one problem solved but now how to get there?  Not wanting to drive that far, I decided to fly. We booked our flight for Nov. 9th to return on the 14th.  If everything went right we were to be in Cody in time for the afternoon hunt.

We arrived in Cody around 1:00pm and my guide John Bradis, and the land owner Merlin  Ballinger picked us up. With no time to waste we quickly grabbed our gear and jumped in the truck. The first  thing we did was drive to a range so I could shoot  my rifle and make sure the scope was still zeroed in.  With it getting late we decided that if we went to the blind we might spook  any elk that might be in the meadow.  Just to check we drove to a spot about ½ a mile from the blind and sure enough there were eight elk in the meadow feeding.

It seemed like a good idea to wait and get out there early the next day. With a couple of hours to kill we drove around to look at all the animals  that were out in the fields.  We went to an area where the elk migrate and saw over two hundred in a big open field and we even watched as many crossed the road giving drivers something to watch as well.  This was quite a sight to see so many elk in one spot. We also saw quite a few mule deer and some whitetail.  There were some huge bucks but they were in an area where there was no hunting.

With it starting to get dark we went back to the **Irma Hotel for a good supper and get everything ready for the next day.  One of the things I liked about this hunt is you don’t have to get up early. To avoid blowing the elk off the meadow in the morning we wouldn’t go to the blind till 2.00.

The next day John picked us up at noon, we grabbed a quick lunch and then it was off to the blind.  It took about 45 minutes to get to the gate where we would start our uphill journey. We had a six mile drive up the rocky, potted, narrow path that took some time but we made it before 2.00. Once we got there I couldn’t believe this was the blind.  When Cory told  there was a heated blind I expected a ground blind with maybe a buddy  heater.  But no.  This was a huge ten by twelve gazebo with sliding windows, cots  and even a big propane heater. It was plenty big.  I think we could’ve played Frisbee in there.  There was also a wide, easy to access ramp into enter the blind.

Once we got settled in we just sat back and waited for the action to start.  A fire had gone through the area in the spring and we could easily see for miles up the side of the mountain. We were about 250 yards away from the trees and the start of the mountain   It wasn’t long and the mule deer started coming in.  All sorts of does, small bucks and a few huge bucks. As we watched the parade of deer John tapped me on the shoulder and motioned for me to look up, to the right and to the top of the mountain.  There were eight elk feeding in an opening about a mile away.  As we were glassing this group we noticed another group of about 25 cows on a steady march to come down to the meadow.  It took them a ½ an hour to reach the meadow but they just hung back in the trees waiting to see if was safe.

After seeing all the deer feeding in the meadow they must have felt everything looked good  and they started into the meadow.  I had my rifle on the shooting bags and was ready for my shot.  With the elk moving and the deer constantly getting in the way it was hard to pick which one to shoot.  I wanted the lead cow but she never cleared.  I pulled on four different elk before I finally had an opening.  When she turned broadside I pulled the trigger on the 270 Weatherby magnum and delivered the shot.  As the elk scattered we could see it was a good shot.  She was running back to the trees but 50 yards latter she just piled up.  We watched for a couple of minutes but there was no movement and then the celebration started.

John and Reyden pulled me and my chair over the rocks and potholes to the fallen beast.  John tapped her on the eye but with no movement we knew it was over.  This was a huge cow,  bigger than average.  We did the usual  picture thing and then John went to retrieve his truck. Loading the big elk was no easy task and I was no help.  It took John and Reyden over an hour to finally get it loaded.   We took it to the local locker plant and dropped it off where they cut and wrapped it for free as part of the hunt.  Then we went back to the hotel for a celebration supper and a few drinks.  The next day John picked us up at noon and we traveled the roads around the hills.  We saw many deer, antelope, big horn sheep and even a moose that was feeding in a river. We even saw a half white, half brown weasel climbing a fence post. That was something to see as it is quite unusual  It was quite a trip going through the countryside and seeing all the animals that Wyoming has to offer.

Like all good things, it had to end and it was time to go home.  Merlin took us to the airport and two coolers of meat we would take with us and two coolers that would be shipped later.  I had a great experience, WDH puts on a quality hunt.  We were very well taken care of and Cody is a great hunting destination.  I would like to thank Cory McGregor,  John Bradish and Merlin Ballinger for this unique and very special opportunity.

*Wyoming Disabled Hunter’s has  been in service for eight years giving 35 t0 40 disabled hunters a year a quality hunting  experience. They have a 92% to 94% success rate on deer, elk and antelope hunts. To qualify you must have a doctor’s prescription stating that you are disabled and to what level. You send that to the Wyoming Game and Fish and get a Wyoming Disabled Hunters permit. Then you go to WDH’s website, download an application, fill it out and send it in.  Apps need to be in by April 1st and are drawn in May.  Veterans who apply must have a 65% service related disability. Deer hunts are the first week in Nov and the rifle elk hunts are from Sept to Nov.  New this year is a bear hunt and if there is enough of a demand they will have another next year.  The hunter is responsible for their own license and transportation to Cory, Wy.  Their motto is “ Don’t Let a Disability Prevent You From Enjoying Life”  and with the great hunt I had they sure proved that to me.  For more go to Wyoming Disabled Hunters  or call  Corey McGregor  307-899-0790

**The Irma Hotel was built in 1902 by Buffalo Bill Cody and was named after his youngest daughter Irma.  One look at the hotel you could just see the history in the building.  As we went into the remodeled restaurant  the first thing you notice is the huge bar. It was a gift from Queen Victoria to Buffalo Bill after doing one of his shows for the queen. With the many pictures and paintings  on the walls you felt you were right there with the cowboys and showgirls of years past. It is rumored the hotel was built on a 130 year old Indian burial grounds.  It is believed the spirits are still alive in the building.  In 1921 then hotel manager Leroy came to breakfast and calmly shot himself at the table. Some say his spirit haunts the hallways of the hotel.  There is a big picture hanging next to the bar and people say they can see Leroy’s outline  in the picture. I don’t know if all this is true but it is sure adds flavor to the hotel.  There is also the Buffalo Bill museum that is a must see for everyone visiting Cody.  There many displays and mounts and even one section that  has over 7000 guns starting from the early 1800s.  It took Reyden and I two days to go through the museum that was worth the trip alone. Seeing all the museum had to offer gave us a chance to see what the Wild West and the western culture was like. Sponsored by: The Physically Challenged Bowhunters of America

Girls with Guns (and Bows) in South Africa