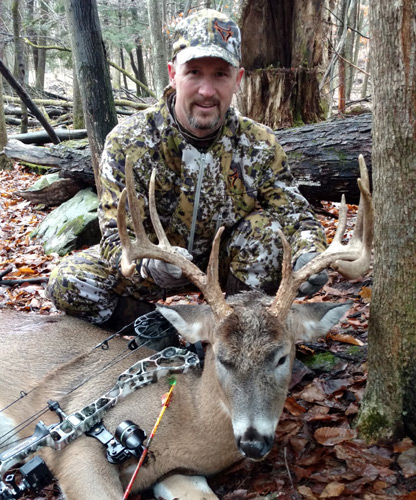 By 9:30 a.m. I was starting to get hungry. I had packed a few granola bars in my backpack, so I decided to take a short snack break. I unzipped my pack like many times before but just as I reached in I spotted a doe coming out of the swamp behind me. The snack was going to have to wait. The doe cautiously walked toward my stand stopping every few yards. She had her tail tucked between her legs and kept looking back towards the swamp. She finally was in range and walked slowly to my right. Being left handed, this was perfect for me. She stopped 15 yards away behind a tree and kept looking behind her. I had made up my mind that I was going to help with the doe numbers and shoot this big doe. She stood motionless for about 3 minutes and then proceeded to walk away from me. She stopped at 22 yards and she was quartering away perfectly for a great shot. She was still acting cautious  and I was sure she was expecting a visitor to follow her. I saw nothing as I looked where she had come from.

I began to focus on drawing my bow and making a shot when I heard footsteps behind me. I froze to make sure nothing would see me move. From the corner of my eye I saw a buck walking up the same trail the doe had taken. He stopped at the same tree and I could see his large body and 5 points on the left side of his rack. The doe saw the buck and trotted off in a hurry. I knew the buck would not wait around long so I drew my bow. He walked out from behind the tree,  took a few steps and stopped directly under one of the Buck Cages I had hung earlier that morning at 23 yards. I was surprised he stopped to smell it but he did. That was a huge mistake.

I came to full draw,  centered my pin behind the front shoulder. The buck was quartering away perfectly so I aimed for the off shoulder and released the arrow. The 3 blade Grim Reaper passed through the buck with ease. The buck kicked and took off over the rise back toward the swamp. I listened for splashing or crashing but heard nothing. I knew it had been a good shot but began to doubt my shot. I grabbed my binoculars to search for my arrow, but I could not see the lighted nock anywhere. I pulled out my phone, turned it on and set the alarm for 45 minutes. That gave me time to calm down and reply to the texts from my wife I had been ignoring.

I read through all the text messages and answered them in about 10 minutes. I was not too excited about waiting for 30 more minutes till my alarm went off. I decided to eat some of the food I had packed so unwrapped a sandwich, opened a bottle of water and enjoyed the morning as I ate my food. All the while I wondered where my arrow was and the buck were.

Waiting for my alarm to go off was agonizing so I called Andy to let him know I had shot a buck and was just waiting before heading to look for him. Andy reminded me to not dress the deer in the woods but wait till I get back to his cabin to do it. I thanked him for the reminder and for the stand!

The alarm finally went off and I packed all my stuff up and got out of the tree. I walked over to where the buck had been standing and immediately found good blood. I looked over the crest of the hill and I could see the nock glowing very bright. The Black Eagle arrow went through the buck and down over the hill. I left my bow and pack, walked to the arrow. The Grim Reaper 3 blade had done its job and the arrow was painted red the entire length of the shaft.

I carefully followed the fantastic blood trail down the ridge toward the swamp. The blood trail was easy to follow as there was blood coming from both sides of the buck. I looked ahead and saw a downed log that the buck had gone over. I stepped over the log and almost stepped on the buck. He must have come down the hill, crossed the log and stood there for a while. There were pools of blood where he stood. I believe that was the reason I did not hear him crash.

For a moment, I stood there quietly thanking God for the opportunity to hunt on this day. I called Andy and told him that I had found the buck not 30 yards from where I had shot him out of his stand. I cleaned up the blood and began taking some pictures of the buck. I tagged the deer and looked through my pack for my deer drag. I emptied everything out of my back and could not find my drag.

The drag out of the woods was not fun and took me a few hours. By the time I reached Andy’s cabin, my back and legs were burning.  I dressed the deer at his cabin and then washed up before loading him into my truck. I took a break and relaxed on my tailgate while I made a few calls and sent some pictures to friends. The drive home gave me time to reflect on the days events and that is when I figured out I had left my 3 Buck Cages hanging in Andy’s woods. In all the excitement of looking for my buck, I had just forgot about collecting them before I left.

After arriving home I green scored the buck. As a typical 10 point he scored 136 4/8 inches gross score that tipped the scale at over 200 lbs. dressed. This by far was one of the largest free range I had ever killed. When my kids arrived home, they were excited to see my buck and were even more excited to hear the story. Abby, my daughter, stayed outside with me as I skinned the buck, keeping me company and asking questions as I worked. After I had it skinned, Abby used the hose to wash the deer off. The day was cool so I was able to leave it hang until I could take it to the butcher the next day.

My Black Friday had been very exciting and my haul was exactly what I wanted. To think I did not have to listen to constant noise, fight crowds of people, or sit in traffic was satisfying! I drifted off to sleep that night thankful for the day God had given me!