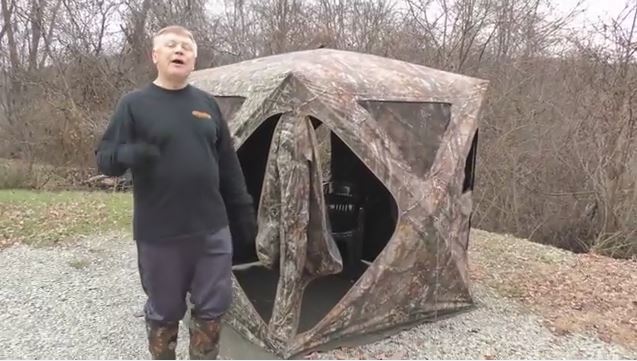 There is a chance that you are a lot like me. You carry a bias against pop-up blinds. I’m not going to tell you what to think about blind hunting but I am going to make you think.

There has been a downward shift in whitetail hunting. The shift is from treestand level to whitetail level. I used to say that next to the invention of the compound bow, treestands were the biggest change agent in whitetail bowhunting. Now I’m not so sure. There may be another player on the field. Although there were pop-up blinds out there I shunned them like an Amish rebel. I was wrong.

I have hunted thousands of days from treestands. As the lead producer of Quest Production Group, I sometimes spent well over 100 days a year in a treestand filming. I thought that it was the only way to kill a whitetail deer with a bow. As time wore on I became totally biased against ground blinds.

Thinking about it now I realize that although you can see better from a treestand there are drawbacks that often bite you. Foremost, human scent flows uninterrupted downwind and can alert any passing whitetail. I am a fanatic about scent control. I wash my clothes in Atsko Sport-Wash and then use N-O-Odor spray, an oxidizer to rid my body of human scent. It is the best system, but downwind deer are still risky.

Another issue is deer seeing you. It is imperative that serious bowhunters check their camo with a U-V light. Deer see U-V. Zero U-V Killer can eliminate the U-V issue but it doesn’t eliminate a deer seeing you if you move. I have been closely following the new deer vision research and let me assure you a deer’s optics are designed to pick up even the slightest movement. It has to do with a concentration of cones in the deer’s eye. They can see you move, even at treestand level.

Then there is the clangy metal all treestand are made of. One metallic click and all nearby deer are on high alert or leaving. Not that treestands are a losing proposition but they have down-falls. Speaking of falls…I have two acquaintances who fell this past season, one broke his back. I don’t know anyone who fell from a pop-up blind.

Moving on let’s look at the benefits of ground level blind hunting. First you don’t have to only hunt where there is a perfect tree. All you need is the perfect spot. Set up your blind downwind of the expected arrival route of the deer. Every region has a prevailing wind. Use it to your advantage. Set up so the wind blows from the deer to the blind.

How about brushing it in? A good idea for sure. Many blinds have ties where you can attach limbs or vegetation. Is it critical that you brush it in? I say not as much as you may believe. Deer get used to a blind quicker than you think. Two or maybe three days, when the blind is uninhabited, and deer are comfortable. Brushing in is still a good idea.

What about those windows? When open, they look like ominous eyes to us but to a deer they are just black spots they can’t see into. They get used to them quickly. The last two years at my Ohio farm I hunted from five different blinds. Each is placed with the prevailing wind in mind as well as a managed access route. If you stand in the clover food plot the first thing you’ll notice is the my blind, windows open.

I don’t over-hunt them. Never two days in a row. Every time I sit in the blinds I see unalarmed deer feeding right in front of me. At one blind, in 3 days, I had two yearling bucks fighting, three does feeding and two record book class bucks all within 20 yards of my blind. At another food plot I had a widemouthed blind set up that had an ominous black window overlooking the plot. I set it up a month early and never hunted it. Deer ignored the blind every time I sat there. I saw a beautiful ten-point under 25 yards and a mega buck under 20 one evening.

Blinds work. You can sit on a comfortable plastic Walmart chair, that doesn’t squeak or make metal sounds. You can move around a lot. I routinely stand up and stretch. The key is to sit back from the windows and wear black. I open every window that offers me a strategic view. Sometimes I leave some of the windows covered with netting. My shooting windows are wide open. I also put a piece of cheap indoor-outdoor carpeting down as a floor. That makes for quiet and clean.

I’ve been using pop-up blinds since they were first marketed to whitetail hunters. Although there are a few that stand out they are mostly look-alikes. Double Bull made an overpriced blind that many hunters liked because it’s windows were very adjustable although not optimally adjustable. They were heavy and not waterproof.

I’ve used many brands and most will work just fine but last spring I discovered a blind made by Field & Stream that is the Mercedes Benz of pop-ups. It is called the, “Ultimate Ground Blind”.  I was introduced to this blind and its designer, Lee Jackson when Field & Stream participated in a hog hunt I put together for writers in Florida last May. I was recently glad to see a designer create a blind that checked all the boxes.  You gotta see this… https://www.youtube.com/watch?v=De3nMgws8yY

Here are a few of its attributes that I love. Easy access. No more squirming in a slit in the side. The Ultimate has a big opening to come and go through. It is tall enough to stand up and stretch. Plenty of room makes this possible. One of the benefits of a ground blind is long sits.

Windows everywhere, that’s what I like most. Of course, windows are the most expensive part of a blind to a manufacturer. That is why some cheap blinds are window-light. How about 8 adjustable windows with shoot-through -netting and not all at the same height. That is what I found on the Ultimate.

The windows are the big difference in the Ultimate as they use a new silent rail and clasp system that allows you continuous silent adjustment on both the netting and the window. Then the designer, Lee Jackson went the extra mile. He used two camo patterns, Realtree AP and Realtree APG, so you can rotate the blind to match the terrain your set-up in. The blind is not only waterproofed but it is not the normal shiny nylon that is reflective but a textured poly that blends in easily. Top it all off with ties for attaching brush and you have the Ultimate Ground Blind. I’m in love with mine. I’ve lost my blind bias.

Don’t Be Bugged By Bugs

Don't Be Bugged By Bugs

Archery Coach of the Year