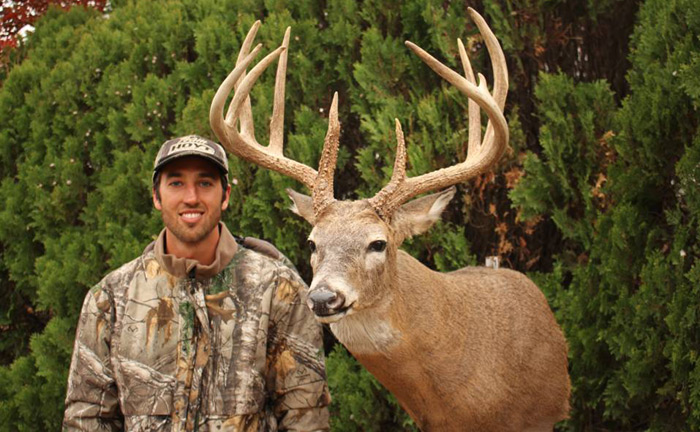 David Yutzy with his River buck.

“I hunt the scraps – small properties, generally 3-20 acres,” David Yutzy of Nickerson, Kansas, says. “No one wants to lease them. Therefore, the farmers allow me to hunt these properties.”

For 3 years, David Yutzy had gotten trail-camera pictures of the River Buck. “I first got pictures of the buck in 2010 when he was a 10 pointer that should have scored 140 Boone and Crockett. However, one side of his rack was broken off from fighting. Although the buck was at only 15 yards, I decided not to take him. I saw the buck briefly again in 2011, but didn’t spot him in 2012. I harvested a 167-point buck in bow season, and my 17-year-old hunting partner had 2012 trail-camera pictures of the River Buck with an 11-point rack busted up from fighting. The River Buck probably would have scored 190, if his rack had been intact.”

Yutzy was hunting 20 acres – a woodlot he’d obtained permission to hunt on the edge of a creek surrounded by croplands planted in soybeans, corn, wheat and milo – on November 14, 2013. The creek provided water, cover and easy access to the harvested crop fields. “The creek was about 150-yards wide with hardwood timber and bedding sites all along its edges,” Yutzy explains. “I never hunt this spot until the rut arrives every year. The bucks travel up and down the creek’s edge, wind checking for does out in the field or in the bedding area.”

“I had the wrong wind to hunt any of the lock-on stands that I had put up,” Yutzy reports. “The only place I could go was to the property’s very back end. I’d have to find a tree and put up a new stand where I’d never hunted before or had a trail camera there.” About 2:00 pm, Yutzy reached the area he planned to hunt and spent about an hour finding a tree to hold his fixed-position stand and cutting shooting lanes to the creek. With the racket he’d made, he assumed he’d probably spooked the buck he was trying to take.

“I couldn’t find a tree big enough to hang my tree stand,” Yutzy says. “Finally, I decided on a relatively-small hedge tree where I only could get about 10 feet off the ground. I didn’t have much confidence in the stand site but decided just to wait and see what happened.” Yutzy’s stand was right on the edge of the creek, allowing him a full view up and down the creek and also of a milo field across the creek that hadn’t been cut. Yutzy sat in his stand for about 20 minutes, but realizing how much noise he’d made, he didn’t expect to see a deer for at least another 45 minutes. He got out his cell phone to text a friend.

“Suddenly I heard a noise across the creek,” Yutzy recalls. “I saw one side of a fine buck’s rack 60-yards away that I recognized was the River Buck’s. From my trail-camera pictures, I’d estimated the buck would score between 170 and 180. He walked right to me. While I was putting the stand up, cutting bushes and dragging them out of the way, I think the River Buck might have thought that all that noise was coming from two bucks fighting, since I was hunting during the rut.” The buck had appeared directly behind Yutzy’s stand and steadily walked straight toward him. Yutzy had to stand up, turn around in the tree and draw his Bowtech  Captain bow with a Rage  broadhead on his arrow shaft. As close to the ground as Yutzy was, he felt certain the buck could see him and spook. The buck was at 20 yards, looking straight at him. “I didn’t want to take a head-on shot, however, I knew the buck was about to break and run.”

Aiming about 6 inches from the bottom of the deer’s chest, Yutzy let the arrow fly, and it center punched the buck. The River Buck took the arrow, wheeled and ran straight back toward the way he’d come. “I could see the buck as he ran about 60 yards and then dropped in a wheat field,” Yutzy remembers.

Yutzy stayed in his stand for a little while, getting his composure back and trying to decide what to do next. The creek beside his stand was too deep to wade and too wide to jump. Yutzy came out of his stand, called his hunting buddy Jordan and walked 1/4-mile back to his truck that was parked at the landowner’s house. After Yutzy told the landowner he’d shot the River Buck, he suggested that Yutzy take his 4-wheeler to get the buck out of the woods. Thirty minutes later, Jordan got out of school and met Yutzy at the landowner’s house. Then the two of them went to retrieve the River Buck – later aged at 6-1/2 years. “When I put my hands on the buck’s horns, I realized that taking the buck of my dreams finally had come true,” Yutzy says.

* Official Buckmasters’ Score: 162-6/8 (doesn’t include inside spread of main beams)