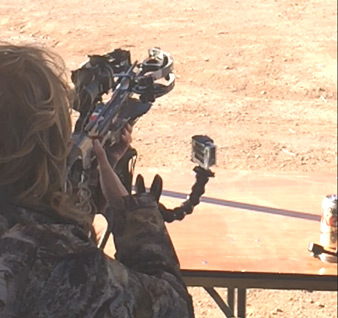 I attended this year’s Industry Day at the Range for the 2017 SHOT Show at the Boulder City Rifle and Pistol Club just outside of Las Vegas. This was my first time to participate, and I was looking forward to getting my hands on as many bows and firearms as I could. Unfortunately, most of the bows were previewed at the ATA Show the week before in Indianapolis and didn’t make an appearance, but the one that did really stood out.

The first thing I noticed about the Ravin Crossbow was its unusual shape. As a crossbow shooter myself, I am used to much wider limbs and an overall bulkier frame. When un-cocked, the Ravin has an axle to axle width of 10.5 inches, and when it is cocked, it’s narrow frame contracts down to a mere 6 inches. Weighing in at just under 7 pounds, I wondered if its power would be a direct reflection of its size. 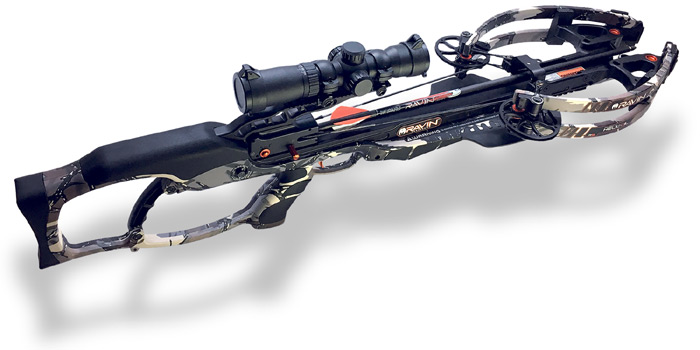 I drove my Action Track Chair up to the table, adjusted my shooting sticks and listened as the rep explained the crossbow’s operation.  There were two models, and I would be shooting the R9. Along with its compact design, the Ravin sports a HeliCoil system. The cables coil away from both the top and bottom of the cams in helical grooves, keeping the cams balanced perfectly. This improves the speed and accuracy of the bow.

The Ravin uses a Frictionless Flight System, which allows the arrow and string to float freely above the rail. This reduces friction for increased string and cable life and consistent accuracy. The Trac-Trigger Firing System slides forward and attaches directly to the center of the string.

After I understood the system, it was time to shoot the crossbow and test its accuracy and ease of use. Attaching the cable to the string was simple enough and the crank was smooth with a ten pound draw. The Versa Draw cocking system crank is ambidextrous and allows the user to both cock and un-cock the string. Before removing the safety, which automatically moves in the safe position once the crossbow is fully cocked, I looked through the scope to visualize my target and familiarize myself with the scope. 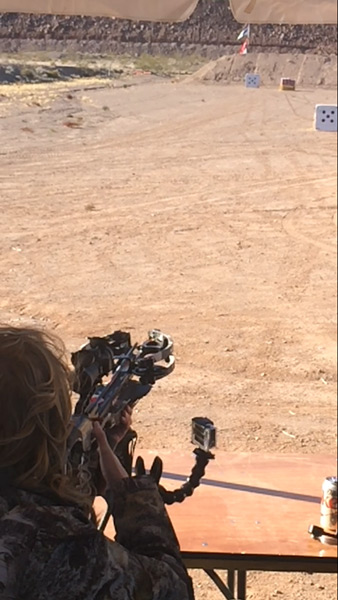 There were multiple Block targets set up at varying distances, and I assumed with its small size, I would be aiming for something in the 40 yard range. I was surprised when the rep told me to focus on a target at 100 yards down range. I let the rep know that I would be zeroing in on the middle circle on the target. I switched off the safety and started to squeeze the trigger. It was much lighter than I was expecting and the arrow flew at 390 fps before thunking into the Block. I was surprised to see the vanes sticking out about 2 inches left of the bull’s eye. I sat back with a grin and began the process of preparing another arrow. Knowing the light trigger, I again looked down the scope at the center circle on the 100 yard block. I lined up on the proper yardage, steadied my breathing and let the arrow fly. Dead center of the bull’s eye at 100 yards.

The Ravin Crossbow may be small but it is mighty. Without the wide limbs, this lightweight bow could be a definite contender for someone who struggles with maneuvering a heavier, wider crossbow. The slim design rests easily on a bipod and the cocking mechanism was simple to use with limited hand and/or arm strength. The webbed guard keeps fingers away from the cable and the safety and trigger are smooth to operate. Right after I shot the Ravin, my friend Chad took a turn.

Chad is paralyzed at the C7 level which means his sensation stops at his mid-chest. He uses a trigger device on his finger and had this to say about the Ravin. “My first time shooting the Ravin was my first time shooting long distance with a bow and it was fast, quiet and on target.  Can’t ask for more than that!”

Suggested retail for the Ravin R9 is $1549.99 – which includes the crossbow and six arrows, the cocking handle, a quiver mounting bracket, six 100 grain field points, scope and a sling mount.

Check out the Ravin Crossbows Predator Crossbow Package on Amazon for current pricing, more reviews and additional information or go to ravincrossbows.com.

More articles by The Disabled Archer on BHN.