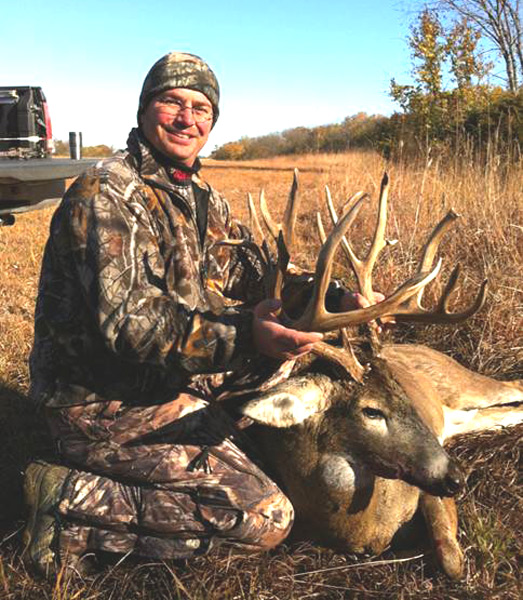 “After I saw my arrow hit the deer, I was shaking so bad I had to sit down before I could climb down out of my tree stand,” James Perry, who lives a little south of Topeka, Kansas, remembers. “I knew this was the biggest buck I ever had shot, and I was concerned because half the arrow was still outside the deer’s chest cavity.”

James Perry was hunting during his vacation in Osage County, Kansas, when he spotted this biggest buck ever. He’d gotten one trail-camera picture of this buck 2 weeks before the first day of his vacation. Because the deer was looking directly at the camera when the picture was taken, Perry assumed this big buck had 13 points. He’d received permission to hunt a 20-acre strip of woods between two fields totaling 180 acres on a 200-acre farm. “I wasn’t hunting a trophy buck this day, but rather a deer for my freezer,” Perry says. On November 7, 2013, Perry climbed in his stand about an hour before the sun came up, with a 4-5 mph wind and temperatures in the mid-30s. A standing cornfield was on his left and a native grass field on his right with a small woods road running between the two fields. Perry often had watched deer traveling there for 3 years.

Due to building a new home in 2012, Perry didn’t get to hunt this little farm. “I’d passed up several bucks before on this 20 acres,” Perry explains. “In 2011, my hunting partner, Jeremy Fry, took a buck there that scored in the mid-140s Boone & Crockett.” Very detail oriented about hunting, Perry wears Scent Blocker  clothing, sprays down with Hunter’s Specialties   Fresh Earth Spray, is cautious as he walks to his stand and remains motionless on his stand.

“Just as the sky brightened, a doe walked along the woods road between the two fields followed by an 8-pointer,” Perry mentions. “The area was so dark I couldn’t see the pin sights on my bow. Then 25 minutes after the sun rose, I looked south and saw a buck’s tall-and-wide rack. I made the decision to take him.”

About 4-years earlier, Perry had had a bad experience with buck fever. Since then, he never looked at a buck’s antlers after he decided to shoot. This buck was 75-yards away, coming through some trees, heading toward Perry and walking a trail between the timber and the standing corn field. “A small group of trees were directly in front,” Perry reports. “However, 45 degrees to my left and 45 degrees right, I had clear shots.”

The big buck stepped into a shooting lane, 25-yards out, quartering to him, moved forward, stopped again and stood there for some time, while Perry was at full draw. Then he stepped into the second shooting lane at about 17 yards. A small tree completely blocking the buck’s vitals was between Perry and the buck. Perry’s shoulder quivered, and his arm shook. Finally, the buck took a half step forward. Perry told himself, “It’s now or never.”

Perry had bowhunted for 25-years. At 17-yards, he expected his arrow to clear the tree by 3 inches and hit the buck right behind his shoulder. He was shooting a Bear Archery’s Carnage bow and a Swhacker broadhead. Perry watched his arrow hit the deer. He shook even harder and had to sit down. He hadn’t gotten a clean pass-through and saw the fletching of the arrow as the deer ran off. The buck ran to Perry’s left on a dead run, reached the native grass field, turned and then ran along the edge of the timber before vanishing out of sight.

“I sat in my stand until I could quit shaking,” Perry reports. “Too, Jeremy was about 400 yards away from me, and I didn’t want to disturb his hunt.” Perry texted Fry, “I think I shot that 13 pointer we’ve seen on the trail cameras.” Fry texted back, “Did you hear him fall?” Perry texted, “I think I did, but I didn’t get a clean pass-through. I’ll wait awhile before I check on him.” Fry offered to come and help Perry, who insisted, “No, keep on hunting.”

Perry felt he should wait until the adrenaline subsided, and the shaking stopped before climbing out of the tree. Perry texted his wife, Jodi, and she answered, “Already? You only left home an hour ago.” Once Fry finally arrived at Perry’s tree stand, Perry was still in the tree. Fry told him to direct him to the spot where he shot the buck. Then Perry climbed out of his tree. The two hunters couldn’t find any blood. Perry admits, “I was worried about my shot placement.”

Then they discovered Perry’s broadhead, half of his arrow and a good blood trail. The two followed the blood trail as it went around the edge of the native grass field and 10 yards into the woods behind Perry’s stand. “When we spotted the big buck facing us, I told Jeremy this was the same buck we’d had on a trail camera,” Frye explains.

When Perry and Fry counted points, they realized their pictures hadn’t done this buck justice. His rack was much bigger with a total of 21 points. Perry and Jeremy went straight to the deer-processing plant, had the buck caped for a shoulder mount and processed the rest of the deer. Then they headed to the taxidermist, because Perry had decided that this was a respectable buck.

“When the taxidermist rough scored the deer at 187 B & C points, I was very happy,” Perry explains. “Later I took the rack to the Monster Buck Contest at the Expo Center in Topeka. I stood out of the way while the Boone & Crockett official scored my buck. My cell phone rang, but I ignored answering the Missouri phone number. Then I had a voice message that said, ‘Mr. Perry, please come to the scoring table.’ When I got there, the scorer said, ‘Your buck’s made the Pope and Young record books and also will be entered in the B & C record book.’ I laughed and said, ‘Well, my taxidermist was sure wrong.’ I was so shocked I had to sit down. I’d taken a once-in-a-lifetime buck.

“I’ve taken six or eight bucks with my bow – some 140 points or better. Now, I’m not sure what I thought was a respectable deer, but I’d told myself, ‘I’m won’t mount a buck that any hunter can go out and shoot with a bow. I’m only mounting respectable deer that aren’t the kind of buck everyone can take.’ This buck was definitely a respectable buck.” 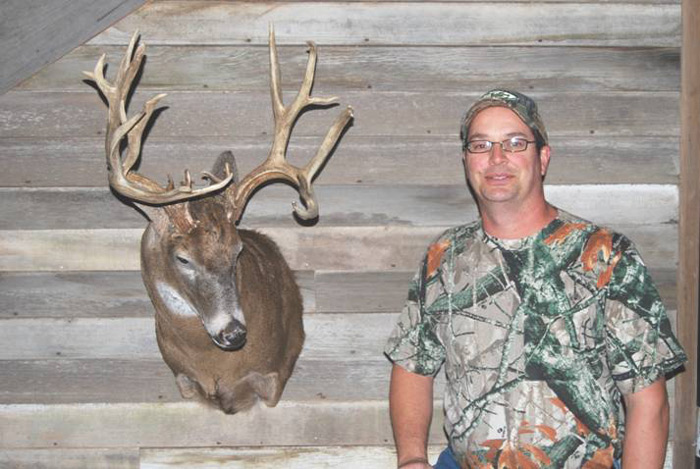 * Official Buckmasters’ Score: 193-6/8 (doesn’t include inside spread of main beams)

Fred Bear On The History Of Bows

Fred Bear On The History Of Bows

Don't Be Bugged By Bugs