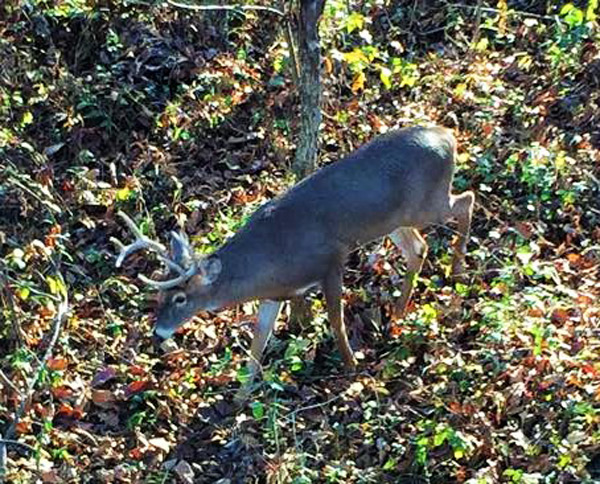 There's some satisfaction found in drawing on a buck and passing up the shot. Personal choice matters. As bowhunting legend Fred Bear said, you don't have to kill something to have a successful hunt.

THE TALL-TINED BUCK is already in the rye field before I spot him walking broadside at the far edge of my effective shooting range. To my left, beyond the handsome whitetail, a dying sun hangs suspended in the bare branches of a red oak tree where one of my frequently used stands waits empty. Upon arrival two hours ago, I’d opted for a ground blind vantage point because the brisk January breeze blowing through the treestand would spread my telltale scent into the field.

Mind churning, I ponder options as the buck lowers his head and begins to feed. Maybe 45 minutes of shooting light remain. Less than a full week is left in the waning season. That means at best I’d have one or perhaps two more opportunities to release an arrow and fill a tag. However, if possible storms sweep across the Wabash Valley as weather forecasters are warning, the buck now in front of my blind could well be my last chance of the 2016-17 season.

I reach for my bow with its nocked arrow already on the string.

SINCE MY FIRST FULL DEER SEASON IN 1962, I’ve had the good fortune to bowhunt whitetails, blacktails, coues, and mule deer in 35 of the 50 states. During my three and one-half  decades as BOWHUNTER Magazine Editor, deer hunting and writing about it were routine parts of my job. Moreover, opportunity, luck, and a bit of shooting skill resulted in countless hunting memories, tons of tasty venison stocking the family freezer, and a budget-busting annual taxidermy bill.

Those first few years were spent chasing whitetails in my home state of Illinois and adopted state of Indiana at a time when deer sightings and shots were few and far apart. In ’62, for example, I hunted southern Hoosierland from early October to late November and saw exactly one doe that I bumped from her day bed in a honeysuckle jungle. A year later, I tagged my first-ever buck on the final day of Indiana’s archery season. It was only the fifth or sixth deer I’d seen since opening day. The fact he qualified for the Pope and Young records was icing on a young bowhunter’s cake.

Across the Wabash River in Illinois, deer-rich Pope County attracted a home town friend and me. We scouted for deer sign during a late summer squirrel season and returned to the Shawnee National Forest with camping gear in the fall to bowhunt bucks. I arrowed a doe and a smallish eight-pointer in back-to-back years, ending each season with sweet success.

In 1965, unable to talk a hunting buddy into sharing a Rocky Mountain adventure, I drove alone from Indiana to bowhunt Colorado mule deer for the first time. After buying a nonresident over-the-counter deer license for $10.00, I headed for an outfitter’s tent camp in the Book Cliffs where I killed a three-by-three velvet-racked muley with a 40-yard heart shot on opening day. By the following morning, I was headed home with venison on ice in foam coolers. The buck’s antlers and salted cape rested beside me on the passenger seat.

From those early hunts to today, I’ve barely slowed down or looked back. During the 1990s and early 2000s, I traveled thousands of miles yearly to bowhunt bucks all across North America. When asked how many bucks I’ve tagged, I’d shrug and confess, “I really don’t know.” What I do know is I stopped counting when my tally topped 100.

Like many deer hunters, I went through a phase where numbers mattered. An unfilled tag was considered a blotch on my deer hunting ability, and I hated to admit I’d eaten “tag soup” at season’s end. It always left a bitter taste in my mouth.

But lately, like many older deer hunters, I’ve come to realize that hunting success can be—and perhaps should be—measured by the yardstick of personal satisfaction more than by blood on an arrow, meat in the freezer, or antlers on the wall. The fact is, in recent years I’ve passed up dozens of gimme shots at plump does and bucks with oversized antlers. More often than not, I snap a photo instead of releasing an arrow.

I know other veterans who do the same. Believe it or not, someday you might feel the same way and understand why.

BACK IN MY GROUND BLIND staked down on a good friend’s southern Illinois farm, I sit watching the buck nibbling at the green rye grass shoots sprouting in a picked cornfield. He’s at least three-and-a-half years old, I guess. His tall antlers are narrow but have decent mass. Several times the previous fall I’d had him within 20 yards but declined to drop the string.

He’s come a long way from that November, I note, but he’ll be even better in the coming fall. One more deer season and he’ll be even more mature, more special. Lord willing, our trails will cross again. If so, and if he’s feeding close by once again, I’ll likely take the shot.

This time I simply place my bow back in the corner of my ground blind and reach for my camera. There’s still enough shooting light to take a few good photos, and I’m perfectly content with watching and then letting him walk away.

*All photos by M.R. James