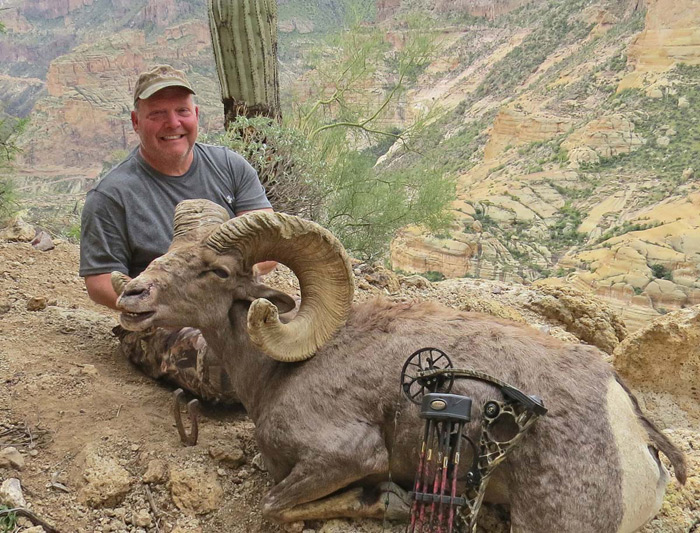 On November 21, 2016, Tony Loop of Appling, Georgia closed within 30 yards above the largest ram he had ever seen. The big ram had no idea he was there. Tony steadied his bow and released the arrow. Time seemed to stand still. Finally, the arrow found its mark, hitting the ram between the shoulders and angling out the right front chest. The ram jumped up and ran about 100 yards onto a narrow rim and lay down.

He tried to contain his excitement, but he and his guides knew that they may have just arrowed a
potential new world record Desert bighorn sheep. “As we knelt beside the big ram and admired This great warrior, I was overcome with both joy and sadness.” said Tony Loop. “He was majestic in every sense of the word. This archery hunt turned out to be both a spiritual and physical journey. I think my guides; Andy, Sam and Wade would all admit that they felt the same. Before us, laid the King of the Canyon and I had my guides to thank for making it all happen. As the four of us took a final look back into the canyon below, we could only imagine how wonderful it must have been for the big ram we named “Horseshoe,” to command such an awe-inspiring view everyday of his life.”

All outdoors enthusiasts, especially those involved in preserving and improving the quality of bighorn
sheep within the United States, we can be proud of the ongoing management program in Arizona.
Their bighorn restoration program can only be described as an overwhelming success story. Arizona
is implementing reasonable practices and policies while enhancing the overall habitat making for a
healthy population of both Desert and Rocky Mountain bighorns.

This Desert bighorn is entered into the 30th Recording Period-which includes entries accepted into
the P&Y Records Program from January 1, 2015 to December 31, 2016.

At the close of every two-year biennial recording period, numerical awards and honorable mentions
are awarded to the most outstanding bow-harvested animals in each species category entered into
the recording period. New world’s records are verified and proclaimed, and awards are presented to
these outstanding animals during the Pope and Young Club’s Biennial Convention and Awards
Banquet.

Prior to each biennial convention and awards banquet, outstanding trophies are sent to a designated
site for panel judging. Panel Judging is the verification process of the final scores of antlers, horns
and skulls of the highest-ranking North American big-game specimens. A handpicked team of highly
knowledgeable and experienced certified official measurers gather for the actual scoring.
Congratulations to Mr. Loop on this incredible animal! This tremendous Desert bighorn, along with roughly 100 more outstanding North American trophies, will be a part of the 30th Biennium Big-Game Trophy Exhibit held at the P&Y Club’s National Convention in St. Louis, Missouri, April 5-8, 2017.
For more information or to register for the Pope and Young Club’s 30th Biennial Convention, go to:
www.pope-young.org/convention/default.asp

The Pope and Young Club is a non-profit North American conservation and bowhunting organization
dedicated to the promotion and protection of our bowhunting heritage, hunting ethics and wildlife
conservation. The Club also maintains the universally recognized repository for the records and
statistics on North American big-game animals harvested with a bow and arrow.
Contact the Pope & Young Club office at: www.pope-young.org or P.O. Box 548, Chatfield, MN 55923, Ph: 507.867.4144