Daddy Shot My Buck with Mike and Parker Simon

A little after dark during the 2014 hunting season in November, Mike Simon of McPherson, Kansas, saw his 15-year-old son, Parker, coming down the road toward their vehicle. Parker said, “Dad, I saw a big buck about noon that had main beams curled at the end of his tall and wide rack.”

Parker insisted that this monster buck was the biggest he’d ever seen. “He was walking a trail about 50 yards from my tree stand. I probably could’ve arrowed him, since I’d made that shot before, but I didn’t want to miss and spook him or hit him in the wrong place and wound him. I knew we could come back and set-up on him again. I grunted a couple of times and stopped him twice, but he wouldn’t commit to come to me.”

As Parker paused in talking about this huge buck, Mike told him, “I shot that buck, son, over there by the Rut Stand.” Parker shook his head, saying, “Are you sure you shot the deer I saw? This buck’s main beams curled down; his rack was wide, high and heavy; and he had a lot of points. You couldn’t have shot that deer.” Mike pulled out his cell phone, went to the photo gallery and asked, “Did he look like this?” “I can’t believe it, Daddy,” Parker answered with a big smile on his face. “You shot my buck.”

The only time Mike and Parker could hunt together was on Sundays because Parker played football. However, once football season ended, and the rut in Kansas kicked in, the two planned this Saturday hunt. “I told Parker we’d pack a lunch and stay on our stand all day,” Simon explains. “I knew this property well and realized bucks would be moving all day, looking for does.”

Saturday morning the Simons left home about 8:00 am and were in their stands by 9:00 am. They were as scent-free as possible and used drag rags to cover their human odor. Mike Simon went to the Rut Stand, so named because he only hunted from this stand during the rut. Parker was on a stand about 250-yards away. “I have four small properties of 80, 100, 160 and 200 acres Parker and I can hunt,” Simon reports. “All four have pinch points and timber, and we’ve been very successful taking nice deer from these small properties. I don’t overhunt any one property.”

Mike Simon had passed on a couple of bucks – each scoring about 140. He’d seen some 150+ bucks from the Rut Stand. He already had had to come out of this stand once that morning to pick up his Flambeau decoy, because a small buck had come in and knocked the decoy over. “I’ve been hunting with a Flambeau deer decoy for several years now,” Simon mentions. “I put Code Blue’s Whitetail Doe Estrous deer lure on the decoy. The last three bucks I’ve had mounted all have been taken with this same Flambeau decoy.”

At 2:30 pm, Mike Simon spotted a big buck walking a trail back to his bedding area. Simon grunted once on his grunt call, and the buck lifted his head, looked but kept traveling back toward the bedding area. When the buck walked up a hill just above a small ravine, Simon grunted a second time. The buck stopped by Simon’s decoy, bristled up and laid his ears back – demonstrating an aggressive posture. He made a circle behind Simon’s decoy, probably because he thought another buck was in the area. “This scenario was exactly what I’d thought would happen,” Simon recalls. “The wind was in my favor, and the doe decoy was about 30 yards from my tree stand. I probably wouldn’t have had a shot at that buck if I hadn’t used my decoy.”

With the buck broadside to Mike Simon looking at the doe, Simon, who ranged the buck at 28 yards, drew his Bowtech 340 Destroyer. When he released his arrow, his Rage Hypodermic broadhead entered right behind the buck’s shoulder. The buck ran straight toward a fence about 10 yards away. At first, Simon thought he might have missed the big buck. However, when he brought his binoculars up, he spotted a big patch of blood right where he’d aimed. The buck jumped the fence, walked slowly, went to his knees and laid down. Simon waited for 30 minutes in his stand to make sure the buck didn’t get up, walked back to his truck, left some of his hunting gear, picked up his camera and unloaded equipment to field dress and drag the deer out of the field. He took several pictures of the big buck on the ground before returning to the truck to wait on Parker. Then after Mike Simon showed Parker the picture of the deer, the two returned to the field where the buck was, field dressed the huge deer and drug him out. 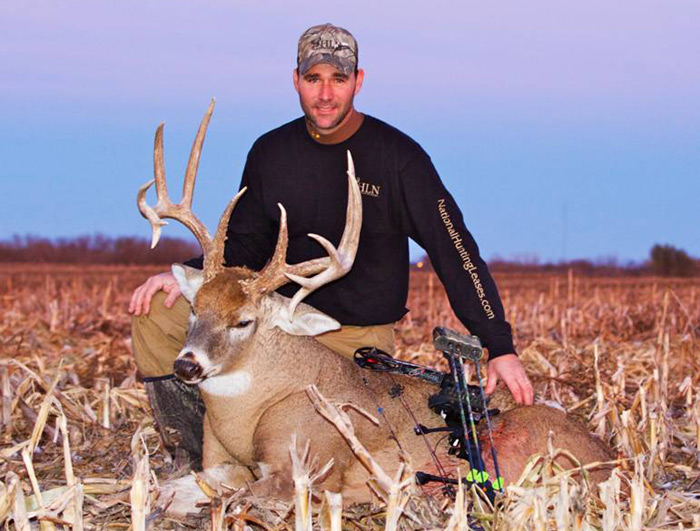 “I guess Parker and I had to drag that deer for about 30 minutes to go that 250 yards,” Mike Simon remembers. “Besides having a big rack, the live weight on that monster was probably 275 pounds.” A huge buck like the one Mike Simon took was a buck of a lifetime. During the 2015 rut season, he passed up three bucks that would have scored in the mid-150s, and another buck about 160 but shot quick pictures and video of them. When asked if he thinks he can take a bigger buck than the ones in his photos, Simon smiles and explains, “I’ve seen two on my property that I think will score more than 200 inches.”

* Official Buckmasters’ Score: 167-6/8 (doesn’t include inside spread of main beams)

WHAT IS THE WORLD FIELD ARCHERY COMPETITION