“Daddy, Your Buck’s Bigger than Mine” with Allen Shelton 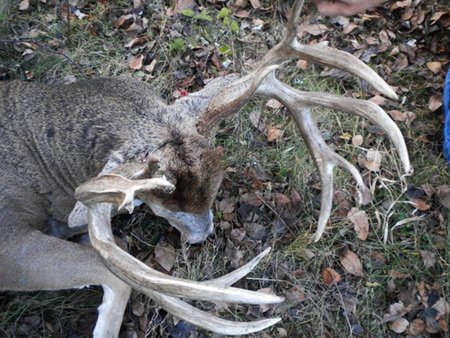 The advantage of trail cameras, especially if you use them for several years, is that you can watch young bucks’ antlers grow before you harvest them. During the rut, a buck may be expanding his territory or following does in estrus into places he’s never been before, and you’ll also spot him on your cameras then.

In 2013, although Allen Shelton of Pottawatomie County, Kansas, had been using his trail cameras continuously for several years, the biggest buck he’d ever seen in his life suddenly appeared in one of his trail-camera photos. This buck literally seemed to have dropped out of the sky.

On November 10, 2013, Shelton left his home at 2:10 pm. Just as he arrived at his stand, he spotted a huge buck coming through the gate leading into the pasture where he was hunting. “I’m very conscious of being as scent-free as possible, so I’d put my clean hunting clothes into a scent-free bag I carried to my stand with me,” Shelton explains. “When I saw that big buck moving into the pasture, I hurried to my stand, took off the clothes I’d worn, placed them in the scent-free bag, after taking out and putting on my fresh hunting clothes.”

Shelton was hunting with a Mathews  Switchback bow and a Trophy Ridge  Rocket broadhead. “The pasture I was hunting had tall grass and was surrounded by crop lands where corn and beans had been planted,” Shelton reports. “I liked this tree stand because I knew bucks would come down one of two trails through the thick grass to where the does liked to bed. The place where the trails came together was a pinch point. My stand was about 20 feet high, so I could spot the trails and the bucks moving through that high grass.”

Shelton only had been in his stand about 5 minutes when he saw Mine coming over the hill. He’d named the buck, Mine, because he intended to take that big buck himself that now was at about 400 yards. “The Mine buck was coming up on the east side of me, moving north and going through a pocket of trees where does usually bedded down,” Shelton recalls. Shelton lost sight of Mine when he went into the trees. He hoped the buck would come out of the trees and walk toward him before dark. But the buck had bedded down in high grass. Shelton felt so confident the buck would stay bedded down until after dark that he texted a couple of his buddies on other stands and other properties about the nice buck.

However, the buck only stayed bedded down for about 15 minutes before he headed straight west and walked over into a 20-yard-wide finger draw, straight toward Shelton. Set-up in a cedar tree, Shelton had plenty of cover to keep the buck from seeing him. But then the buck walked right under that cedar tree. “I couldn’t get a shot because when the buck walked under the tree, the cedar limbs hid him from my sight,” Shelton explains. “The area the buck had come through was very thick, and he’d moved off the trail and walked into the thicket between my tree stand and the trail. I couldn’t get a shot at him as he was coming toward my stand, and I couldn’t see him when he was right under me.”

After going under Shelton’s stand, Mine kept moving to the west and then circled the tree – never giving Shelton an opportunity to shoot. The buck next walked out from under the tree into thick brush and circled the tree again – never more than 15 yards from Shelton, but in cover so thick that Shelton couldn’t get a shot. Finally Mine walked out 11 yards from the base of the tree where Shelton was at full draw, turned broadside and presented the shot. Shelton waited for his pin to settle behind the buck’s shoulder and then released the arrow. The buck kicked his back legs up and started running straight south, away from Shelton. “I couldn’t see past 30 yards, but as I listened, I thought I heard the buck crash into the high grass,” Shelton says. “I sat down on my stand and texted all my friends, telling them I’d made a good shot on the biggest buck I’d ever seen in my life. I also texted my wife and asked her to bring my two boys to help me blood trail the deer.

“A friend picked up my wife Leslie and my two boys, Marcus 13 and Coby 11. We drove to the place where I’d arrowed my deer, and of course, as soon as the truck stopped, my two sons were out of it. When I showed them the direction my deer had gone, they started scouring the area before I even could discover a blood trail. Marcus and Coby yelled, ‘Daddy, we found him!’ As I walked toward the boys, I heard one of them say, ‘This thing is huge!’ Marcus yelled out, ‘Daddy, this buck is bigger than the one I shot!’” Two years earlier when Marcus was 11, Allen Shelton had taken Marcus on his first deer hunt during Youth Season. When a buck from their trail cameras showed up, Shelton coached his son through the shot. Marcus’ buck scored 184 inches. 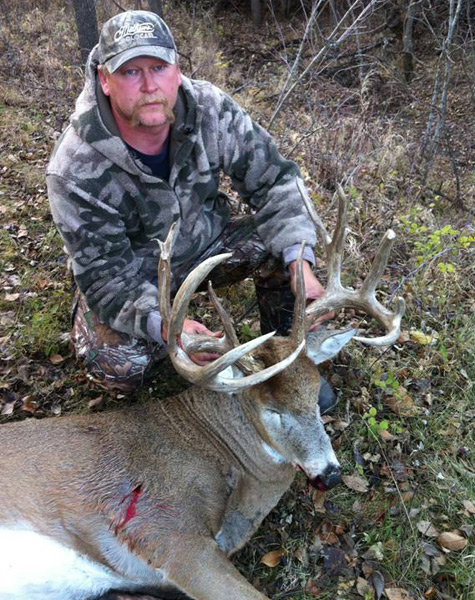 Once Allen Shelton reached his deer in 2013, he could see that this buck was every bit as big as the trail cameras had indicated. When he wrapped his hands around the buck’s antlers, he announced, “This buck will be hard to beat.” After loading the deer into the back of Shelton’s pickup truck, Shelton and the rest of his crew took the deer back to Shelton’s home where there was an electric hoist and a walk-in cooler where he keeps the animals he mounts in his taxidermy business. The buck was caped, skinned and hung in the cooler to make many tasty venison dinners for several months to come. 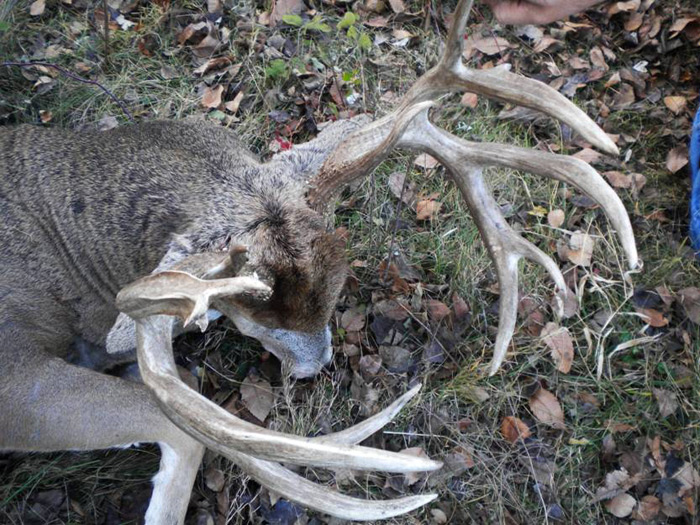 * Official Buckmasters’ Score: 177 (doesn’t include inside spread of main beams)