by Paul Murray
in Bowhunting Posts
0 0
A A
0 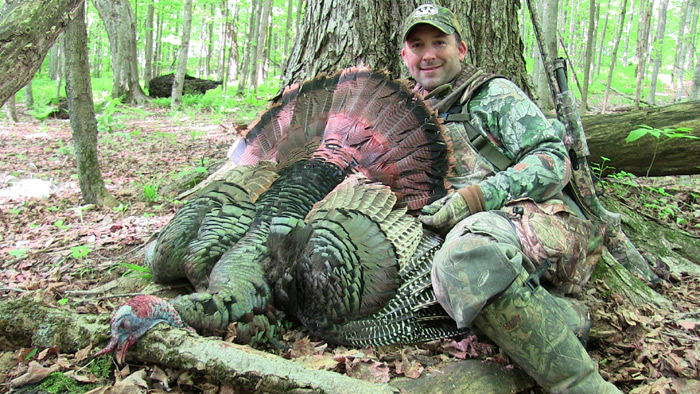 Just before I threw him over my shoulder, to head back to our camp, I looked to the sky and said, “Thanks Bill.”

While walking through the super market one evening, my phone buzzed for probably the 500th time of the day. The text message from my brother only said, “Call me.” The following phone conversation, left me somewhat lost and confused, as I struggled to complete the simplest tasks that I had to do that day. How could someone that strong and full of life be gone?   Time, they say, helps heal all wounds…

With life continuing we move forward, every day we step forward and repeat the process, leaving behind a bit of the grief without ever losing it completely. The following spring we went through all of our annual preparations, our food plots were sowed, our turkey scouting was done and of course the hours of preseason calling practice had been completed. One by one my group of friends managed to talk big old toms into walking in to range of their shot guns and archery equipment. It seemed as though every day my phone buzzed with a picture messages of one of them sitting behind another full fan gobbler.

As the middle of the month of May approached, I looked at the 10 day forecast. A low pressure system was moving through our area and by the end of the week high barometric pressure was forecasted to move back in. My vacation day request was submitted at work. Now, I needed to determine where I was going to hunt. The first half of the month I had been chasing a big old tom behind our camp that I had been after for a couple years. Chances were good that I would continue the chess match with that bird. However, after two evenings of some pretty intense scouting, on a bunch of different properties I have permission to hunt, my original thought was confirmed. When I hit the woods at the end of the week, I would be going behind our camp.

I sat there in the woods behind our food plot, the night before I planned to hunt hoping I could get a location on where that big old bird would be spending the night. As I sat there in the woods that night, I couldn’t help but think of my friend I had lost months earlier, thinking of all the times and laughter we shared over the years. I sat there until 9:00 that night. As the darkness of night swallowed the day, barred owls called, Canada geese honked and crows cawed on their way to roost. The old tom never made a peep with his voice or his wings as he was headed to his nightly perch. Was he gone, had another hunter on one of the neighboring properties got him? In my mind I asked my friend that question. As I stood up to walk out of the woods, I knew with complete confidence that, that big tom would be there in the morning.

Day break the next morning found me, sitting at the base of a big cherry tree about 100 yards from where I sat the night before. As the woods began to wake up and come to life, the tom made his presence known, not 100 yards from my position. Sitting there I had to grin. After 15 minutes of listening to him gobbling on his own, I delivered my softest tree calls. The tom responded very enthusiastically. After another 10 minutes, I purred, clucked and very softly yelped. He responded again, before pitching down out of the tree about 80 yards out in front of me. I could see the tip of his fan come up, through the tree tops of a fallen leafless ash tree, when he went into display. My plan was to let him come find me. I sat there for 25 minutes in silence, catching a glimpse of movement every now and again.

As I sat there, completely committed to the idea that I was going to sit there in silence and motionless until he was in range for a shot. The time dragged by until my peripheral vision caught movement to my right. My morning off from work was about to take a sudden turn for the worst. Two young coyotes about 75 yards to the North West were putting the fix on the longbeard, I was planning on throwing over my shoulder.

Instantly my mind raced as to what I could do to save the hunt. A half a second later and a couple alarm putts, followed by running legs and eventually loud flapping wings the tom, was headed South East, towards Florida and my chess match was rescheduled for another day.

With the rest of the morning wide open, I took a very long deep breath, stood up and prepared myself for a long walk. I slowly walked and called making a big loop through my property for the better part of an hour and a half before sitting down on a log about 150 yards from where I started the morning. Seven minutes into my break, I heard what I thought was a faint gobble to the North. Honestly, I almost didn’t believe what I was hearing. I sat there for another couple minutes and there it was again. My location in this hemlock bottom was definitely not helping me with hearing this bird. As I made my way North up the ridge in the direction I heard the bird gobble, I stopped ¾ of the way up the ridge and waited. After 5 minutes of listening, I reached into my vest for my crow call. As I brought the crow call toward my mouth, the sun shined brilliantly in my face and I paused. A light cool breeze hit me in the face, and I immediately thought of the friend we lost. I looked into the sun and said, “Come on Bill, let’s kill this bird.” Before I could crank out a couple caws on my crow call, the bird gobbled on his own still a couple hundred yards off. I put the crow call back in my pocket and continued in his direction. When I reached the top of the ridge the hard woods opened. Before I could call, the bird gobbled again. I worked my way to the bottom of the ridge to a large maple tree and gave a series of yelps. The tom responded with a double gobble. As I leaned against the maple tree to pull out my decoys I said, “We got him Bill,” as if he was standing right beside me.

After getting the decoys set up and settled in at the base of the maple tree I started to call. The tom responded after every call and he wasn’t alone. A hen between him and I took exception to me being in her neck of the woods and she paraded right in to my decoy set up cutting and yelping all the way. Between the two of us calling, he didn’t know what to do.  Gobbling all the way, marching right into his death, in full strut.

Some people come into and pass through our lives, while others come into our lives and connect with us on different levels. I am very lucky, I have an incredible group of people that I call friends, but I am extremely fortunate because I also have Hunting Buddies or as I call them, family and when you’re family, you may be gone but you are never forgotten. The camaraderie we share with one another, is by far and away the best part of the hunt. The smiles, the laughter and the brotherhood, without it, would it be worth doing?

It's Time To Hunt