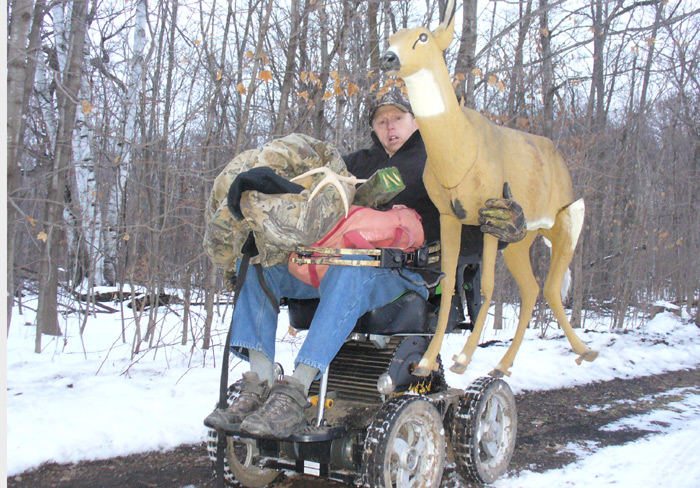 The author has an easier time of it when hunting the blind behind his home. Well, easier than the other blind. Still, he has his hands full.

For me the 2016 bow season was a disappointment.  I had cameras out and was getting good pictures of nice bucks but knowing deer are in the area doesn’t always mean one will come walking by your blind.  Here in Minnesota after several good years the state had let herd levels drop too low.  With that they restructured  the rifle, bow and muzzleloader seasons. No more could we take up to five deer in most areas.  This year in my area we could take two but still only one buck.  Some areas it was  strictly bucks only and some it was bucks only but you could apply for a doe tag.

I had been out shooting my crossbow all summer getting ready for the upcoming season.  At the beginning of the season I told my wife and son that this year I was not going to shoot any does but  would take any legal  buck. That was going to be my 2016 bowhunting commitment.  Maybe I said this too loud and all the deer in the area heard me.   This year I would be hunting two different spots, one behind my house with easy access, the other 45 minutes north and required a four wheeler and a long  run  to get to the blind.

I can access the blind behind my house myself  as long as the conditions allow my to use my power chair.  I take my chair 200 yards to the blind which is on a travel corridor between two wooded lots.  The north spot requires a two mile ride on a four wheeler that takes you to a bridge, then its 150 yards on a narrow, home made bridge, then another 500 yards to the blind.  This is not an easy task and I definitely need someone to assist me.  First off it is dangerous to go across the bridge, if you’re not paying close attention you could wind up in the drink.  For this spot I always have to rely on someone to help me to get me, my chair and all my gear into the blind. Then someone needs to take the four wheeler away so I only go when my son can take me. I sat this blind seven nights and one morning and never saw a deer.

My backup is the blind behind the house.  As long as the weather cooperates it’s not a problem. But it is not an easy adventure either. The hard part is carrying all my gear,  crossbow, quiver, the big bag with all my hunting supplies and sometimes a decoy.  This might not sound like a lot but figure that I am sitting down and only have one free hand,  I need the other to run the joystick. This makes it extremely difficult but not impossible. Sometimes bad things happen.  Like if I drop something. Then I have to set everything down and lean over and try to pick it up. This sounds simple but sometimes my hand slips off the arm rest and I do a header to the ground. There is no easy way for me to get back in my chair, it has taken me over an hour to get back on and when I do I am totally spent.  Luckily I have a hard head and even with all the problems and obstacles I keep doing it anyway just for that one chance to shoot  buck.

Have you ever said something you wish you could take back, like me when I said “ No Does This Year”? Of course, I had does and fawns three to ten yards from the blind but I held true to my word and let them all pass.  Finally in mid October I got my chance.  With about fifteen minutes of light left a nice buck was coming in  to my right, He stopped 45 yards away and just stared at the decoy  With so much brush in the way there was no shot.  Time was running out as he started inching his way to the only opening I had.  He was cautious  as he moved  within 25 yards.  I had to thread my shot through the trees and as he turned broadside, in the only opening I had a shot though, I thought this is it.  I picked up my Ten Point crossbow, quietly slid the safety off and centered the crosshairs on the sweet spot. When things looked good I let the arrow fly.  There was a loud smack, but it didn’t sound like arrow hitting hide.  It was more of a solid sound and I knew what happened.  It was getting dark and I couldn’t see anything so I sat there figuring what to do next. My grandson Reyden was close, heard the shot and came to give me a hand.  I motioned for him to go where the deer was standing when I shot. As he got close he yelled he had found my arrow, stuck dead center in a small tree.

We dug the broad head out of the tree , picked up my gear and headed back to the house. It’s times like this when you wish you we alone so you don’t have to listen to all the snide comments. That was my only opportunity in 2016 and I blew it.  Thinking back to what might have happened as I was getting ready to shoot he must have taken a step forward and I followed him into the tree.  I went out several more times but it was the same thing, those pesky does and fawns. They just seemed to know they were not on my hit list. I don’t regret my decision  but I should have kept it to myself in case I had a change of heart.  Well the good news is maybe there will be more deer next year.