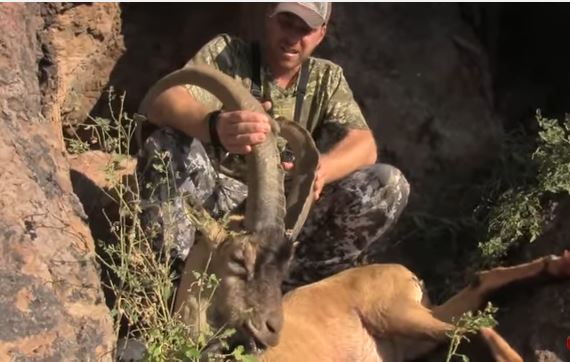 Well we did it… after a 10 year journey  of hoping, dreaming and planning for this hunt…. we finally made it happen… I say we… yes I was the “trigger man” and yes I am the one who diligently put up $1600 each year to try and draw a tag, but it was a team effort and I don’t know if I could have done it on my own… I’m happy to brag that my team is the first in the world to capture and archery kill on film (as far as I know)… Levi Paul is a beast 10 years filming me has never missed a shot yet…

Here are some tips if you are planning on doing this trip:

*The New Mexico herd was gifted to NM by Iran in the early 1970s.

*Persian or Bezoar ibex in The Florida mountains of New Mexico are the only free range huntable herd in North America.

*“The Rock” is 9 mile long x 6.5 mile wide mountain range that seemingly grows from the vast flats surrounding into the sky , and it is comprised of very steep, difficult terrain, that should not be taken lightly be prepare for some technical climbing

* It has the highest abandonment rate of any hunt in North America.. Meaning more people quit the hunt because they realize they bit off more than they could chew…

*On the January archery hunt the success rate is 3-5%