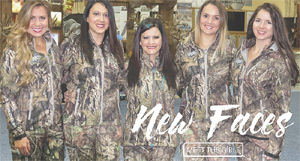 As they begin filming Season 5 of Universal Huntress, co-hosts Jen O’Hara and Norissa Harman have a big surprise for fans of the TV show – starting in Season 4, which premieres June 27, 2017 on Pursuit Channel, Universal Huntress will become Girls with Guns® TV. “We’re so excited to finally announce the show’s name change. It’s been in the works for awhile but we had to keep it quiet until we were able to tell all of our sponsors and the network,” said Jen.
“In business, they always tell you, ‘If it’s not broken, don’t fix it’ but sometimes you have to switch it up – keep it fresh,” said Norissa. And she should know. As the creative director for the iconic outdoor fashion line Girls with Guns® Clothing, Norissa is constantly reworking her designs to keep up with trends and the demands of their diverse fan base of outdoorswomen. “When we started GWG® 8 years ago, we wanted to make sure that we had something for every gun girl – pistol, rifle, and shotgun. We want the same thing for our show.”

Jen explains, “All of the inspiration for GWG® and now the TV show has come from our passions – hunting, shooting and personal protection. Sometimes we get so excited about one part of the industry that it tends to overshadow the others. It can be a good thing – it led to the development of our line of technical hunting gear for women – but sometimes it can make our fans and customers feel left out, like we don’t care about their passions, so we’re always keeping an eye on what’s new and trending so we can go after that market to take care of all of our customers!”.

Jen and Norissa hope that by changing the name of the show to Girls with Guns® TV, they’ll be able to show viewers what it really means to live the #GWGLife – from personal protection training with NRA® and The Well Armed Woman™ to North American hunts with the TeamGWG girls and everything in between! They’re also excited to give fans a first hand look into life at Girls with Guns® headquarters – from the design and development of new products to juggling real life at their family-owned company. Laughing, Norissa said, “I definitely think they’ll [viewers] be surprised when they see what goes on behind the scenes at GWG®! We’re normal, down-to-earth, God-fearing boss chicks on a mission to design quality outdoor apparel and love every badass minute of it!”

Even producer Emaneul Kapp agrees. “Changing the name from Universal Huntress to GWGTV will allow for diversity in the show. Women across the gun and outdoor industries will be able to relate, regardless if they are hunters or not. Being able to broaden the scope of the show with the name change will help us bring in new and exciting entertainment for our viewers.”

While the name change will take effect when Season 4 premieres on June 27, 2017 on Pursuit Channel, the girls have another surprise in store for Season 5. “As women, we want to be able to do it all, but sometimes we just can’t. There have been so many amazing opportunities that we’ve been offered but had to turn down because there are only 2 of us and only so many days in hunting season,” said Jen. “In Season 5, you’re going to see 3 new huntresses join GWGTV as guest hosts – each bringing something new and exciting to the table.” Norissa added, “They won’t just be traveling with us; they’ll be experiencing their own adventures and letting viewers into their lives, sharing what being a Girl with Guns means to them.” Season 5 guest hosts will be Kasi Geraci, a contestant on the 2015 season of Extreme Huntress, Heather Glenny, a hunting guide at Quest Haven Outfitters, and Callie Wolverton, the public relations manager at Girls with Guns® Clothing.

Be sure to catch the premiere of Girls with Guns® TV on Pursuit Channel Tuesday, June 27th at 11PM EST. You can also catch up on GWGTV on Wednesdays at 3:30PM EST and Thursdays at 4PM EST. Pursuit Channel is available from most cable and satellite providers as well as online and on Roku devices for free. If you prefer to binge watch online, CarbonTV is streaming all episodes from Seasons 1-3 and will be adding new episodes from Season 4 weekly.