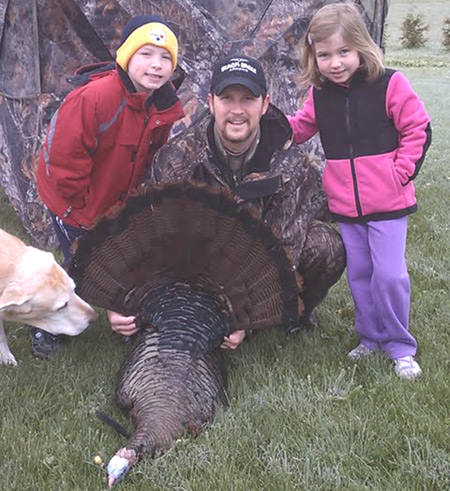 I recall talking with Jason one evening, on the phone, about some new arrows he was really stoked about. I asked if I could purchase a dozen and get them set up for the Pennsylvania Spring Turkey season. Jason took my information and sent me a dozen BEA Carnivores. I was excited to see what was so special about the arrows.

I open the box and the arrows looked great. The BEA symbol and the red and black made them look amazing. The red and white Blazer vanes with black nocks really had me excited. I took the arrows to my basement and cut them on my arrow saw, glued in the inserts and let them set for the night. 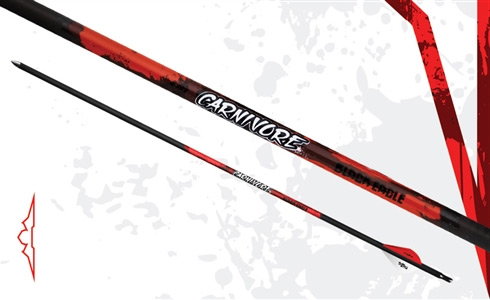 The next day I grabbed my bow and headed for the backyard to shoot the Carnivores for the first time. Boy was I impressed with the way they flew, I adjusted my sight and within a half hour I was shooting with confidence out to 80 yards. I was overly impressed and phoned Jason to let him know what I thought. He was impressed with my feedback and I told him that I would do my best to kill a turkey the following week on the PA Spring Turkey opener.

Friday, April 27th was the evening before the opening day of the PA season. I drove home from work and dressed to go out and place my ground blind where I had seen birds strutting near the corner of a cut field. I knew the birds roosted in some big oaks not to far away. I set the blind and waited till dark to see if I could hear anything. As the sun set and giant flares of orange grew in the sky, I heard the flapping of wings. I knew birds were close and heading to bed. I waited in the blind till it was dark then headed home.

The morning of Saturday, April 28th, 2012, I was up at 4 am ready to have a quick breakfast and head to the blind. A bowl of oatmeal and a banana filled my stomach for a long morning sit. I checked the outside thermometer and it read 27 degrees. I quietly went to my basement to dress for the hunt. I knew it was going to be chilly but dressed light anyhow. I grabbed snacks, water, camera, backpack, MR7 and my quiver of new BEA Carnivores. Each arrow was tipped with a 3 blade Grim Reaper head, also recommended by Jason and off I went into the cool morning.

The walk was about ½ a mile and I chose not to drive as not to spook the birds. The early morning was clear without a cloud in the sky. There was a heavy frost that covered everything in a layer of bright white. I reached my blind before the sun was even peaking over the horizon. I grabbed my decoys and set them up 20 yards from my blind. I had two hens and a jake. The one hen I had very low to the ground with the jake over her with the other hen off to the side. I was hoping this would work. I could see my warm breath as it met the cold air and I was super excited to be out on this crystal clear, cold, morning.

Back in the blind I closed my eyes and listened to the morning come alive. I setup my camera and got out a few calls. The blind was facing east and I watched as the first rays from the sun peaked over the trees. Brilliant pinks, oranges and reds filled the changing blue sky like a fire out of control. Off in the distant an old raspy hen was waking her friends for the day. I listened and counted 5 gobbles. She called again and I heard the Toms gobble back.

I gave a few yelps out the window of the blind with my slate call and the Toms lit up again. I decided to be quiet and listen for them to fly down. Being in the blind, I was not able to hear them fly down but I was able to notice that the birds were on the ground and seemed closer than when they were in the roost. I called a few times with my mouth call and many gobblers answered back right away. Then they began to gobble on their own a few times. By this time I had the camera rolling and focused on the decoys. The Toms were coming from behind me and there was a small ditch they would have to cross to make it into the field I was hunting.

I aggressively started calling to the love struck gobblers and they replied each time. I could hear them as they closed the distance between us. They came into sight in the field to my left and I watched as the first bird went into the ditch and climbed up the other side. The rest of the birds followed the leader and headed my way.

The mature Tom that was leading the group of 4 birds slowly came out into the field and began walking toward the decoys. I ranged the first bird at 35 yards. I set my sight at 35 yards and slowly drew back my MR7, found my anchor point and put my nose on the string. I carefully steadied the pin on the walking gobbler and let the Carnivore fly. The BEA flew true and blew through the bird. He flapped his wings and took flight as I watched him glide across the field and then crash in the treeline at the far side of the field. I was so pumped that it all went so quick and it was all caught on video. I wondered if anyone had killed anything yet with these arrows. I sent a text to Jason right away about the hunt. He was fired up as I told him it was on video and that I would send him the footage. He told me my turkey would be the first animal harvested with the BEA Carnivores. 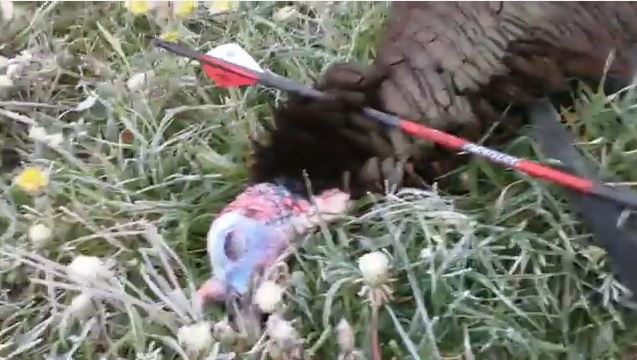 Unzipping the blind and feeling the cool air on my face, I walked to where the turkey was when I shot and found my blood soaked arrow. The Grim Reaper head had done its job flawlessly. I walked toward the treeline and found the Tom. It was easy to see his black feather against the heavy coat of frost that stuck on the grass and trees. I picked him up and he had a nice 8 inch beard and over inch spurs. Not too bad for my first spring tom with the bow. I tagged my bird and slowly walked back towards the blind. 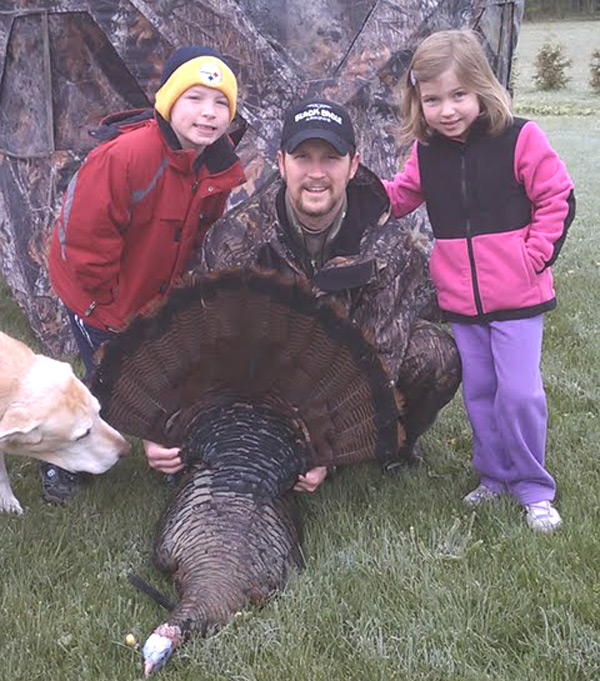 My morning was over quicker than I had though so I packed everything up. I knew if I had everything packed up I could go back to my house and get my truck to haul everything out. I made the short walk back to the house and hopped in my truck. I headed back to the field for my things and when I returned home, my kids were in their pajamas, in the garage waiting for me. I told them to get dressed so we could all get some pictures. Of course, my yellow lab, Petey wanted to be in the pictures as well. I set the blind back up and my wife came out to snap a few pictures of all of us.

That afternoon I got out the deep frier and we had some of the most delicious breaded turkey strips. The kids enjoyed the feast as I showed them the video on the TV. Later that evening, I edited the footage and posted it on youtube. Jason let me know that they had also posted it to the Black Eagle Arrow website as well. What an exciting end to a beautiful day. For me, Black Eagle Arrows and Grim Reapers have been my setup since that day in April of 2012.

The Science Behind Growing Chufa