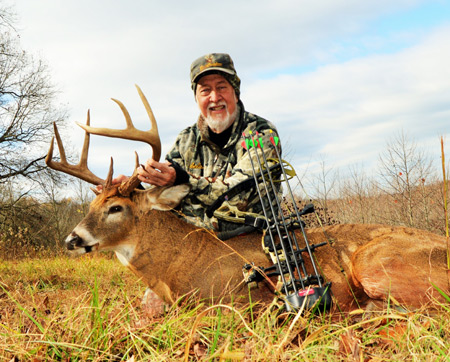 HALF A CENTURY HAS PASSED since Holless Wilbur Allen’s first wheeled bows rolled off a production line and forever changed modern archery and bowhunting. What began as no more than a ripple of interest in 1967, would over ensuing years become a virtual tsunami that flooded the bow manufacturing market with these fast and flat-shooting mechanical bows.

Hailed and hated from the outset, compound bows slowly earned widespread acceptance and gradually became the preferred weapon for a majority of modern bowhunters. Actually, compounds are the only bows that at least one generation of bowhunters knows and uses. Those are hard facts. The compound bow is here to stay.

Regardless, many of us with a bit of white in our whiskers still recall the days when longbows and recurves were the only options we had. More importantly, we did quite well with these so-called stickbows we carried afield, whether those bows were mass produced, self-made, or crafted individually by talented bowyers. Heck, we even honed our own broadheads to razor-sharpness using a file, oiled stone, and leather strop. And a lot of us still do.

Why the bother? The title of a 1953 book by legendary archer/bowhunter Howard Hill perfectly sums up what many of us believed. From pioneers like Dr. Pope, Arthur Young, Roy Case, Fred Bear, and Glenn St. Charles to those of us who first picked up bows in the 1950s and 1960s, all we wanted was to accept the challenge of truly “hunting the hard way.” That meant staying undetected and getting close to wary game animals, drawing and shooting instinctively without relying on rangefinders while mostly hunting with our boots on the ground. (Who else besides me recalls when treestands were illegal in deer-rich Michigan?)

So if you objectively consider the archery hunting traditions and equipment used prior to 1967, you’ll better understand the earthquake caused by the birth of compound bows five decades ago. In fact, they’re still shaking things up.

ANOTHER RELATED TREMOR SHOOK the archery industry earlier this year. It struck during and after January’s Archery Trade Association’s annual gathering, where the industry’s manufacturers unveil their latest products and take orders from dealers. The resultant less-than- positive consensus coming out of the ATA rendezvous was word that “significant problems exist” in the archery business.

*Static or declining numbers of bowhunters, including recruitment issues and an aging demographic.

*A trend toward high end bows with prices approaching $1,500, which has resulted in fewer sales and less frequent upgrading of hunting bows.

*A “peaking” of bow technology, including materials and quality, meaning bows are better and last longer than ever before.

Combine these factors with a widespread “business as usual” mentality on the part of manufacturers, and add standard retail buying programs and rep groups that place problematic requirements on dealers that hurt sales. Also, there’s the steady decline of whitetail populations in certain popular bowhunting states, plus diseases that take a toll on deer. And don’t ignore problems of spreading urbanization, posted private properties, and overcrowded public hunting areas. All of these storm clouds have been forming for several years now.

Some doomsayers are worrying this could be the beginning of the end. That, of course, remains to be seen, but it seems apparent that more people are becoming increasingly aware of the growing problems facing bowhunters. Some anti-tech folks will point fingers of blame at compounds, saying that Allen’s invention and manufacturing patent opened the door to the problems in 2017’s archery/bowhunting community. Other concerned people will roll up their sleeves to start work addressing and solving the issues.

None of us can look into the future and state with certainty what the eventual outcome will be. Yet I’m optimistic enough to think we’ll eventually weather this storm. I’m also of the belief that it’s people and their attitudes, not just their choice of equipment, that’s most often found at the root of many problems.

Bows are efficient tools that have been around in one form or another for centuries. Lord willing, they’ll still be made, used, and enjoyed for many more generations to come.

Duck Or Come To Dinner With 'The Duck'