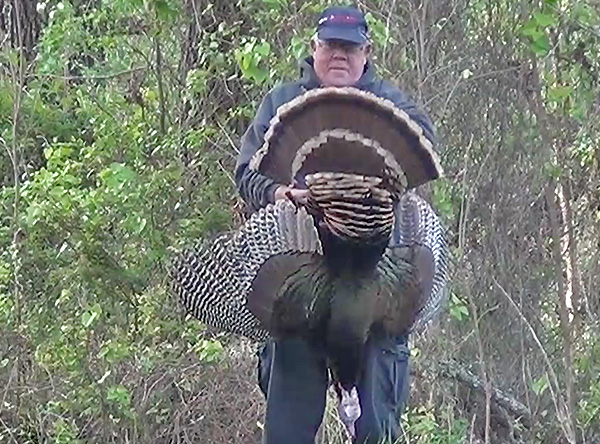 Come On Over Here, Big Boy! 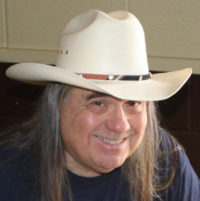 Mature Tom’s are known for hanging up out of range, and we were there right now. The big Gobbler had done a good job and shortened the distance between us. But at the moment he was frozen 35 yards from The Duck and I. My choices were to do nothing and see if he came closer on his own; or, give him a little vocal encouragement.

I watched his head and posture, weighing what he would do now. And I made my choice … and used the vocal encouragement option.

He was cool with it and pulled away from the wood’s  edge and walked to the middle of the narrow opening.. 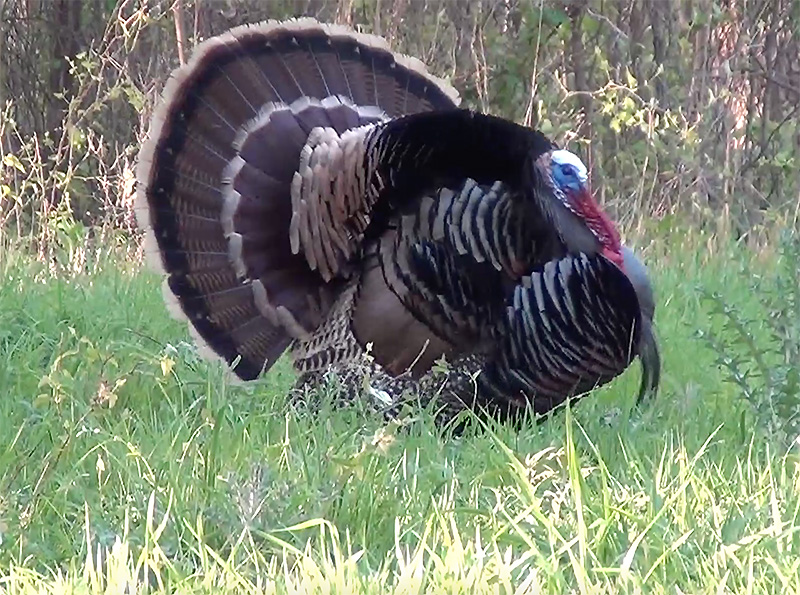 A little more encouragement and he strutted and drummed his way up to the Dave Smith jake decoy, which was only 10 yards from us. 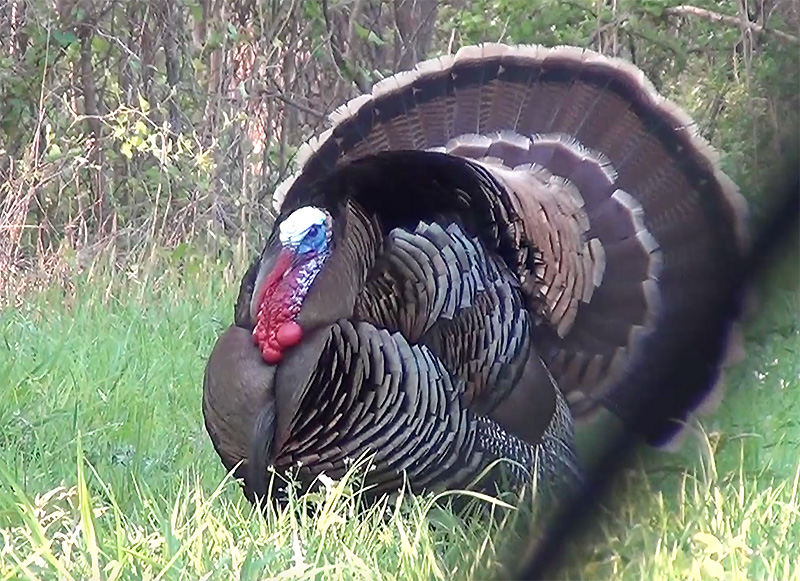 The Duck whispered he wanted a more broadside shot and waited. When the Tom turned just right The Duck took his shot, knocking the gobbler off his feet. It flailed his wings wildly and and loudly thrashed along for 30 yards … and stopped. 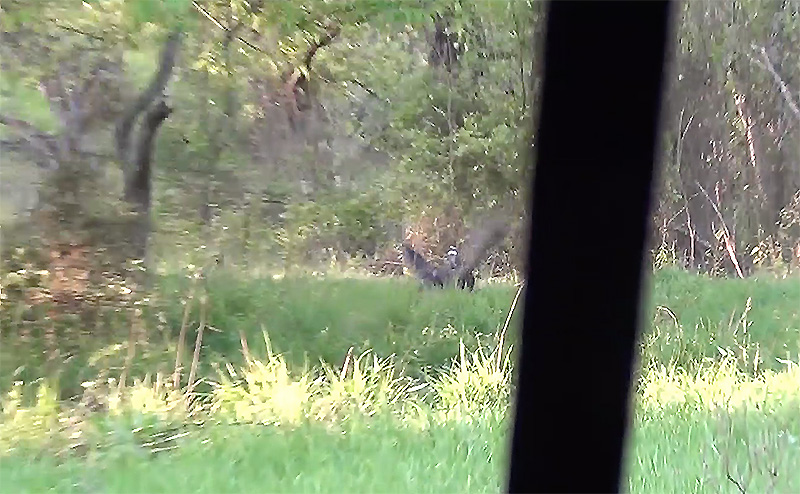 The Duck grinned ear to ear. He was one happy wild turkey bowhunter. 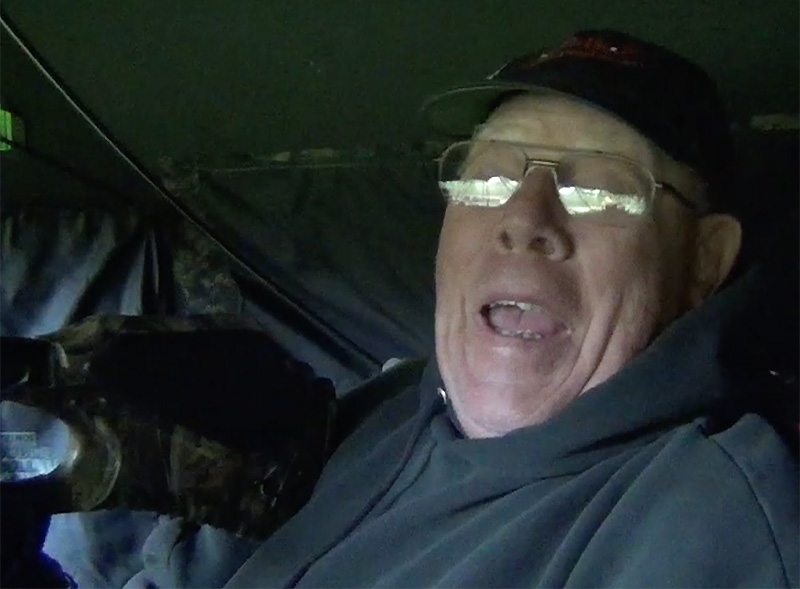 We congratulated each other on jobs well done and The Duck got out of the blind and made a joke about having to make a difficult recovery. It wasn’t of course, the gobbler was in view 40 yards away. 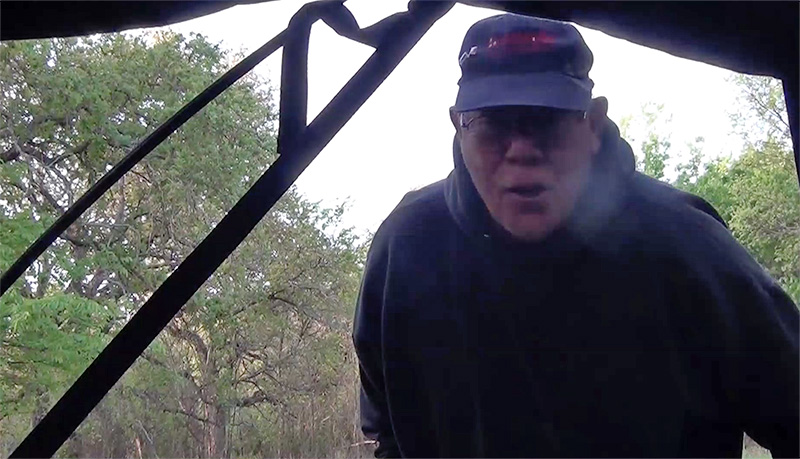 When he got to the decoys he patted the Dave Smith jake on the back. 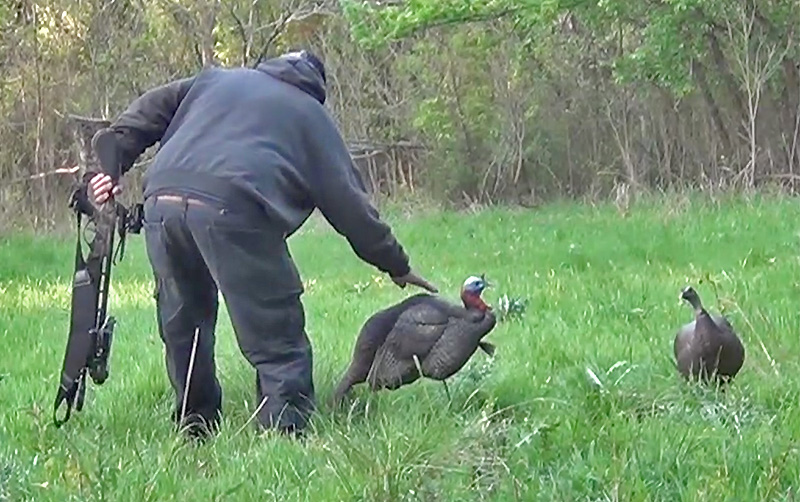 His arrow lay on the ground behind the decoys and he picked it up for me to see it. The Duck (Don Beckwith) is currently shooting a Barnett Wildcat X5 crossbow armed with the 100% carbon, tough and accurate EXECUTIONER Crossbow Bolts from Black Eagle Arrows. The business end of the arrow is a crossbow and compound approved Grim Reaper Broadheads PRO Whitetail Special with a 2-inch cut. We definitely Watched ‘Em Drop on this gobbler. With this combination of quality products The Duck has harvested whitetail deer, black bear, wild hogs and wild turkeys. 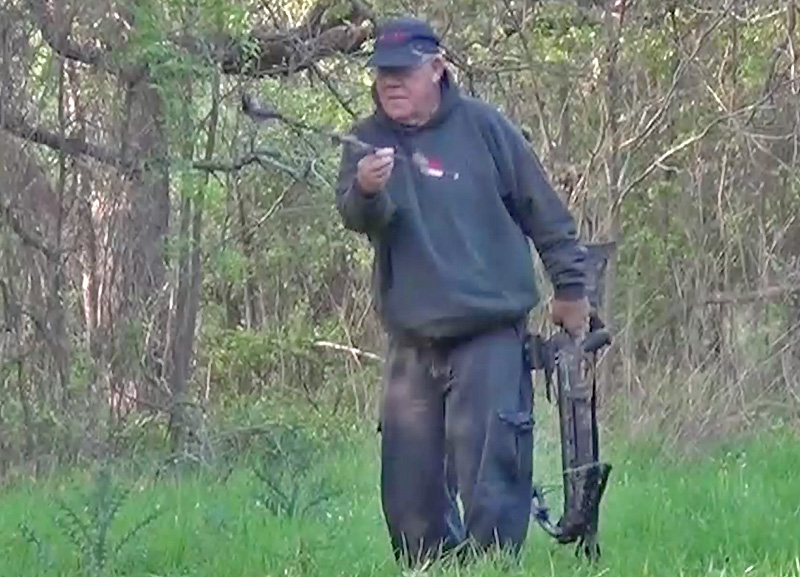 Then he walked to the gobbler. 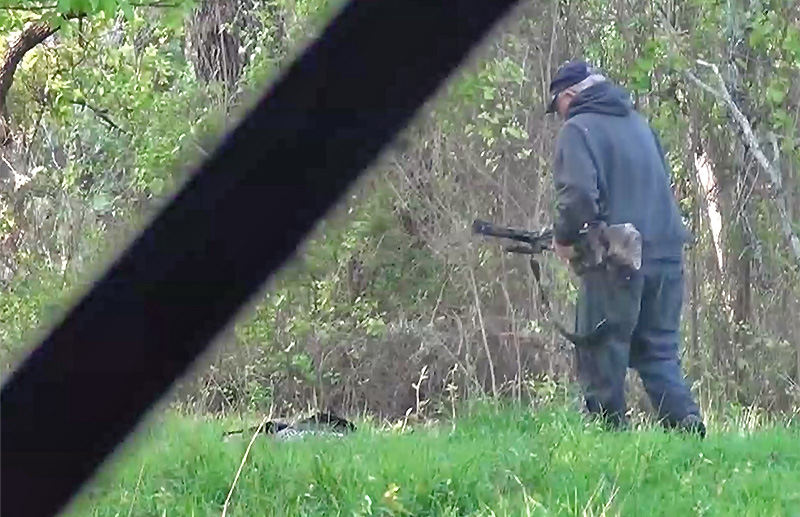 He picked up the Longbeard and opened the fan and I took his picture with the big Rio Grande gobbler. 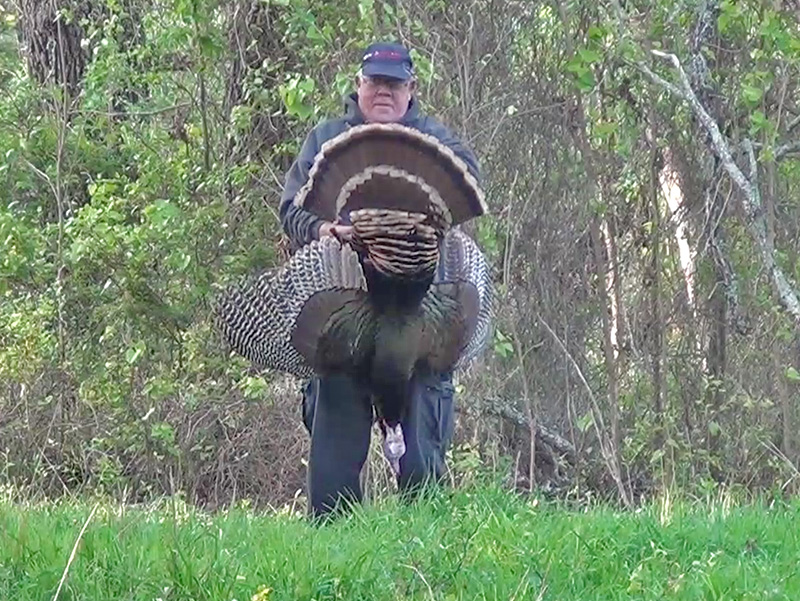 Then he carried the gobbler over to the blind. 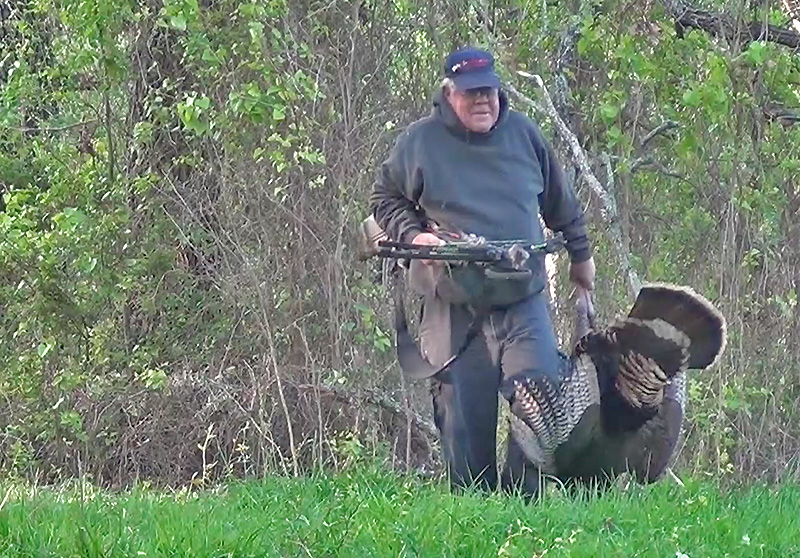 And held it for me to take a closer picture. 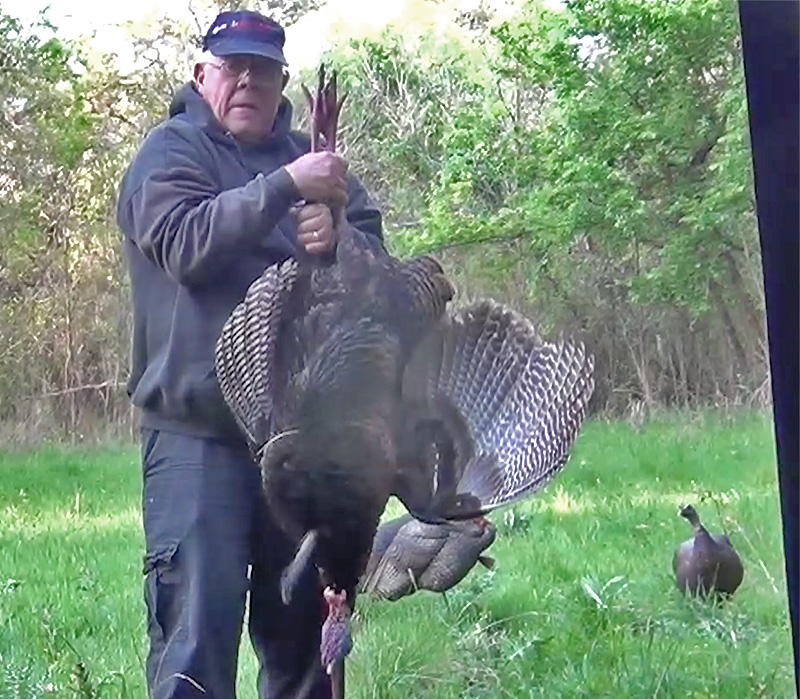 My long time bowhunting partner Don Beckwith (The Duck) definitely had a spectacular 2017 opening morning bowhunt. And so did I.

NOTE: I videoed this turkey hunt and am working on the edit. I think I should have it up tomorrow. 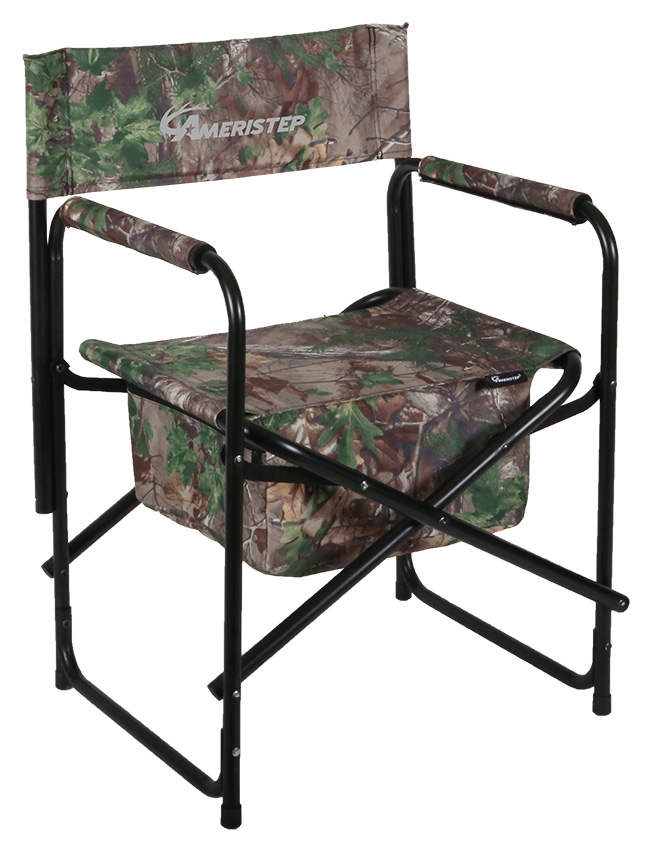 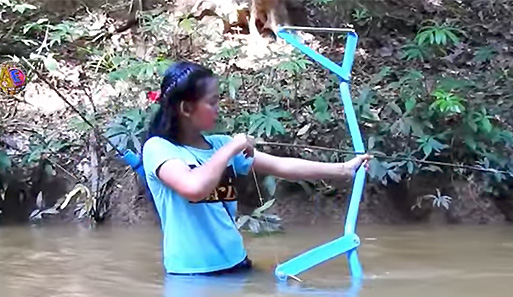 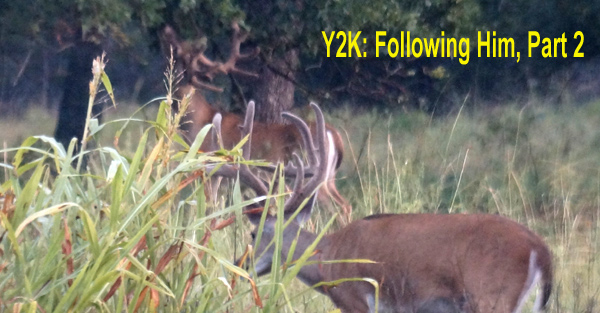