The Science Behind Growing Chufa 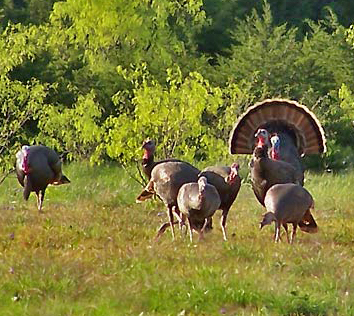 Planting chufa is one of the best ways to attract turkeys to your property.

With proper habitat management, wildlife prospers. And, research by the University of South Carolina provides some insight on how to better grow chufa and ultimately attract turkeys to your land.

Although chufa, a grass-like plant grown mainly for its tubers, has been cultivated for more than 100 years in the Southeast, little science-based management information existed on the plant until recently. To provide fact-based information to landowners, the National Wild Turkey Federation recently funded a project through the University of South Carolina to find more concrete evidence on the benefits of chufa.

When planted in the early summer, chufa requires a 90- to 110-day growing season. It grows its tubers, which measure 1/2- to 3/4-inches long and are similar to potatoes, just under the surface of the ground in a cluster. Because of the shallow and packed nature of the tubers, wildlife — especially wild turkeys and waterfowl — can easily reach the nutritious food, which is high in oil and sugar content.

The first finding in the report regarded the types of soil the chufa was planted in. Typically, land managers recommend planting chufa in sandy loam soils, based on the assumption that sandy soils allow wild turkeys to easily scratch the tubers out of the ground.

Fertilization and proper soil pH is very important for maximizing chufa production. Researchers found plots that received liquid fertilizer produced more and larger tubers as compared to plots that were not fertilized. Chufa is a nitrogen-loving plant. Applying the recommended amounts of fertilizer to soils with a pH between 6 and 7 will maximize nut production. In addition to fertilizer, the NWTF recommends using DeltAg’s Seed Coat, Soil Solution and Plant Power. These products will allow chufa to maximize nut production.

Researchers also found that delayed planting of chufa after fertilizing reduced chufa growth and gave competing weeds a head start. Like other plants, weeds compete with chufa for water, nutrients, and sunlight. If weeds are not controlled, your chufa plants will eventually lose the battle.

Before the research was conducted, there were several date recommendations for planting. Researchers compared the NWTF’s Turkey Gold® Chufa — a Spanish-grown chufa — to a domestic variety to determine which dates and conditions best supported chufa growth.

According to the research, the NWTF’s brand of chufa emerged faster at cooler temperatures when compared to the domestic variety. When the chufa grew at temperatures exceeding 86 degrees Fahrenheit, regardless of variety type, the tubers were often attacked by fungus and bacteria, which reduced germination.

“Selecting the right time to plant is critical,” Kennamer says. “Chufa needs adequate moisture availability first and foremost. Although chufa has a broad planting window in the Southeast, it’s best to neither plant too early in the spring nor wait until daytime temperatures reach the 90s.”

Because turkey enthusiasts throughout the U.S. grow chufa, the NWTF selected a variety that would germinate well at cooler temperatures to compensate for the narrow planting window in the northern U.S. while still allowing landowners in the Southeast to plant chufa right after turkey season when the plants will have enough time to receive the rain they need to grow.

Sprouting at lower temperatures also could allow chufa to better compete against weeds. In the Southeast, planting chufa immediately after the close of spring turkey season is recommended. However, when planting brands of chufa other than the Turkey Gold variety, waiting until later in the spring to plant will produce better results.

One of the biggest mistakes landowners make is planting too much chufa. While common planting rates are 50 pounds per acre when broadcast seeding and 35 pounds per acre if drilling the seed, many landowners misjudge the actual size of the plot, or feel that planting more seed is better than not planting enough.

“Remember, chufa can’t stand competition, even against itself,” Kennamer says. “If you have any doubt about how much to plant, plant less.”

Planting inexpensive chufa is not necessarily the best way to save money because less-expensive brands may be of lower quality and may not produce as well as brands that cost slightly more. When purchasing chufa, first check the germination tag. This tag is a legal requirement for any seed sold in the U.S. The germination rate, seed purity and test date all are listed on the tag.

In some states, the percentage of dormant seed, or seed that does not germinate immediately when sown, is also listed on the tag. Though dormant seed is not dead, it still will not grow when planted. Dormant seed rates can reach 45 percent in some varieties, so checking the tag and purchasing a brand with fewer dormant seeds will be more cost effective in the long run.

The test date is another important piece of information listed on the germination tag. By law, seed must be tested approximately every nine months, so make sure the seed has an up-to-date tag. Stored properly in cool, dry conditions, chufa will hold its germination fairly well from year to year. However, germination rates will plummet if the seed is stored in hot, humid conditions, or if the chufa gets wet during storage.

Making chufa part of your wildlife management plan is one of the best ways to attract turkeys to your property. As the research shows, however, the devil is in the details. Paying close attention to proper planting methods, applying periodic maintenance to control weeds, and purchasing quality seeds will increase the likelihood of a successful crop.