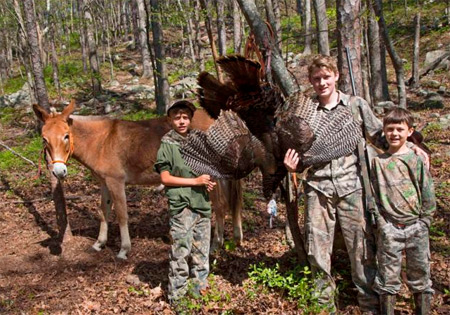 Josh Spielmaker and myself have taken our kids youth turkey hunting for the last seven seasons. We always have some turkey action, but Josh’s son David has yet to connect on a gobbler. These high-pressured, public-land Eastern gobblers aren’t easy pickings. David turned 15 this year and this would be his last youth season. The pressure was on to get him a gobbler. It may sound trivial, but this was serious business. Josh and I planned to hunt together with David and my son, Bear. My father, Gary Newcomb, would be guiding my youngest son, Shepherd. We’d be hunting in some Arkansas bear country, and I wanted gain more knowledge of the terrain for future fall hunting.

I’ve been training a young mule for the last two months (Project: Hunting Mule), but I’ve got a four-year-old mule that’s been doing pretty good. She would be the pack animal for this trip. We loaded up Ellie Mae with enough supplies (and then some) to last six people two days. The young mule performed without flaw on the entire expedition. My purpose for owning mules is to be able to get deeper and stay longer in wild places. Mission accomplished on this trip.

We hadn’t scouted for turkeys, but felt the area would hold some gobblers. At daylight on opening morning, after a 45-minute hike from camp, we crested a ridge and found some fresh gobbler tracks in the mud. This was an encouraging sign. Despite the gusting winds, we decided to make a blind yelp on the Hook’s diaprahm call. We didn’t know it, but the action was about to heat up quick. The four of us strained to listen for a gobble.

We didn’t hear a response, so I decided to ease over the lip of the ridge ahead of the crew. No sooner than I did, I saw a gobbler in full strut 80 yards away. I watched his head extend and retract as he gobbled in the wind without making a sound we could hear. I quickly instruct everyone to hit the ground and get set up quick. “He’s right there in full strut!” I whispered. “Get ready, David. He’s coming.” The gobbler had heard us, but we couldn’t hear him. We were lucky we didn’t bump him.

Josh quickly loaded the three-inch number fives in his Remington 870 and handed the gun to David. “Get against that tree and get ready.” He said. Josh, Bear and myself crowded around a small pine while David sat about an arm’s length away against an oak. I told Bear to lie on the ground, and I dipped the bill of my hat to cover my face. I let out a yelp and within 30 seconds we saw two bright-red heads within gun range. “They’re coming from the left, David. Get ready.” Josh whispered. David slowly turned his gun barrel the direction of the bobbing heads and swinging beards.

The gobblers came to within 25 yards and craned their necks at the suspicous mob of camo huddled around the small trees.

David squeezed the trigger and the bird flopped. The other tom sailed off the mountain back towards our camp. David had his gobbler. We whooped, hollered, high-fived and then prayed. It was an awesome moment.

Youth turkey season for our clan is like a national holiday. As a father, I know that the season of life in which my children will be children is fleeting – kind of like turkey season. It goes quick. The time of meaningful influence over the value systems of our kids is a short window. I want to take advantage it. The impressions and influence left by time with dad, grandpa, and other strong male influencers are powerful and long lasting. Kids watch how we respond to stress, they pick up on what we value, they mimic what we talk about, and they learn to see life through the filter that we show them. As parents, our character is constantly on display and will be distributed through generations beyond us.

Time in wild places is good for detaching from distractions of every-day life and focusing on meaningful interactions with the kids. I applaud game agencies for these youth seasons. They’ve become my favorite times to be the woods. Additionally, I’m grateful for our public lands which are under attack, especially in the Western United States. Recently, I joined a great organization called Backcountry Hunter’s and Anglers. They’re doing great things to protect our public lands, and in doing so, protecting our ability to experience wild places with people we value.

Ellie Mae and I forded the creek while Gary, Shepherd, Bear and David pull up the rear while in route to camp.

The young mule did good at the creek crossing. I always appreciate my First Lite gear, but I especially love it on trips like this. Merrino wool is second-to-none for active hunting.

We estimated the mule was carrying 250-pounds of gear. She was probably overloaded, but handled the trip just fine. Mules are known for their strength and endurance.

Steep terrain was a challenging topgraphic feature and exactly why we wanted a mule to carry in our gear. Mules are a lot of work, but worth it on trips like this.

On the first night we watched a spectacular moon rise and an even more spectacular fire crackle as stories were told while young ears listened.

With dogwoods in full bloom, this spot made for a perfect Arkansas spring turkey camp.

Not long after daylight on opening day David got his first gobbler.

The happy hunters show off the big gobbler.

Wild turkeys are spectacular animals with a wide range of beautiful patterns and colors.

The whole crew enjoys a fire after the successful hunt.

Shepherd was hesitant to ride the mule across the water and decided to just get his feet wet instead.

The mule made this trip much easier for all of us.

Myself, Bear, Shepherd and Ellie Mae on the way out after a highly successful youth turkey camp.

The Damage Wolves Are Inflicting On America: Part 4a Big Wolf Lies: