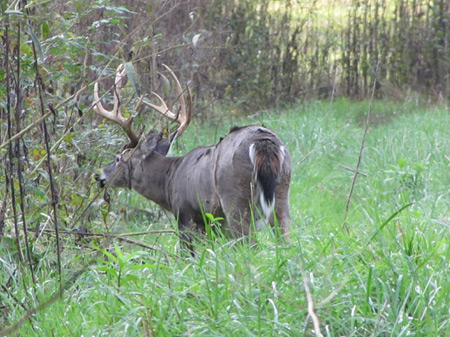 Real research has a way of smashing preconceived notions about wildlife management. Recently researchers at Auburn University conducted a study with a large number of bucks (418) concerning who does the breeding. They conducted genetic paternity tests and found lineage for 143 deer. It was the, “who’s your daddy test”. The result surprised everyone.

In the boxing ring, where there are is segregation between lightweight contenders, middleweight, light heavyweight and heavyweights. In the whitetail woods, there are no such classes. And as a surprise to everyone the size of antlers didn’t play a significant role either, the determining factor was body size. The breeding success wasn’t determined as much by antler size or age as it was about bulk.

As it turns out when we shoot a really impressive 2 ½ year old buck with a set of 125’s on his head, who may weigh 140 lbs., we’ve not necessarily removed the best breeder from the woods. The truth is, one of the determining factors is overall size.

Have you ever seen a real bruiser buck? Just last season I got a look at a monster buck who was on the wrong side of the fence and on the neighbor’s farm. He was dramatically different than the ten-point I had in front of my blind. He was an eight with pop-bottle bases. He could eat the bucks lunch who was in front of me. He must have weighed 75-100 lbs. more than the ten. This was one of those 250 lb. bucks that Ohio is famous for. I waited, it got dark, then he crossed the fence into my food plot but it was too dark for an ethical shot. I never saw him again.

That was November 12th and that buck, who never stepped in front of any of my cameras was probably on an excursion. Recent GPS tracking has shown that these mature bucks often do a road trip during the rut. Now, in light of this research from Auburn University, I believe this was a breeder buck who lives near my farm. His genetics probably circulates through my deer herd. He was one of those fat bully bucks. And that’s this week in the whitetail woods.