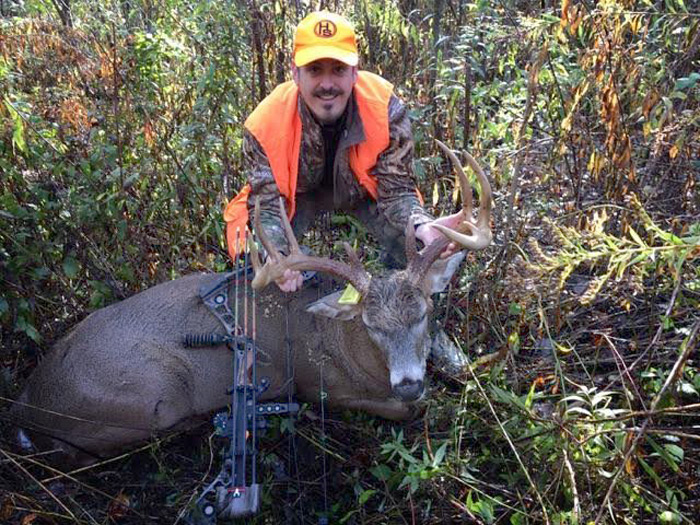 Ron, all smiles with Big Boy down.

I bought 5 acres of property from a friend of mine in 2010 and moved my family out of the suburbs. One of the main reasons I wanted to move was to have more space for my kids to play. It also was going to allow me to have some better areas to hunt. It is a decision I have never regretted!

Ron Kline, who sold me the property, has been my neighbor for 6 years now.  Ron and I share a passion, our wives would call it an obsession, about whitetail deer. We have been gathering pictures and videos of deer each year. Ron has spent a lot of time planting food plots and managing his 80 acres. It is his own little slice of heaven.

Josh Ferraro, my newest neighbor, moved into the house down the road. Josh and I are no strangers. When he was younger I use to coach him at soccer and that continued until he graduated high school. I was on Facebook one night looking at his post and saw that he and his fiancé, Becky, had purchased the house. Even though it was 10:30 at night, I jumped off the couch and drove down the road. I knocked on Josh‘s door and Becky answered. We had never met so she was shocked. Josh came to the door and was surprised it was me.

Ron and I now had a new partner who shared our passion for whitetails. We all talked through the summer about the big bucks we were seeing. We shared trail camera pictures and thoughts about stand placements. Ron would hunt his own 80 acres and Josh and I were going to hunt the 100 acres across the road.

As summer was coming to an end Josh called  to ask me about arrows and a few sights for his bow. I told him to come on up to my house when he had the chance so he could check out some of the stuff I had in my basement. Even though I am left handed, I still had a few right handed sights laying around. I also had some Black Eagle Arrows he could use as well.

When Josh came up to my house a few days later  I set him up with a new Dead Center Archery Stabilizer, a new 5 pin sight and 10 Black Eagle Rampage Arrows. We got everything in order and he headed home to shoot for a bit. I asked him later that week what he thought about the stuff. He really liked the arrows and new accessories for his bow. He noticed tighter groups right away even at further distances. The season was getting closer and there was still work to get done.

Ron was coming off of a big year. He killed his largest buck ever in 2015. A nice non-typical PA brute that scored in the high 140’s. He had killed that buck during the first week of the season with some Black Eagle Zombie Slayers. He was sure that the 2015 buck would be a tough buck to beat. Ron was busy with work and setting up his new Redneck Blind as summer was at an end.

The three of us had all seen the nice 10 point that was frequently visiting the bean field almost every night. Ron had some great pictures of him in his field and Josh and I saw him many nights before dusk. He was growing a huge frame and was easy to pick out. All of us were excited for the season to start so we could pursue this great buck. As he shed his velvet we saw less and less of him but we knew he was still in the area. Our trail camera pictures caught him periodically moving in the dead of the night.

I helped Josh pick out a few stand locations and he helped me put in a few small food plots. I set up an Advanced Takedown Treestand in a thick secluded area for him to hunt. It seemed like a great place to ambush the Big Boy or any of his smaller friends. Josh hunted that stand a few times and saw some nice bucks but, like the rest of us, he was holding out for a chance at the Big Boy on the block.

A few weeks into October and none of us had pulled the trigger on any bucks. I did have some great video footage from my trail camera of the Big Boy on my trail camera. It was October 19th and he was hitting one of my mock scrapes at 3:19 am. He could not get enough of the Evercalm that was in my Buck Cage. You can hear him on the video smelling the air and looking at the Buck Cage. I showed Ron the video on October 26th when I dropped my daughter off at his house at 6:45 am. We were both impressed at his long main beam length. We knew he was bigger than we thought.

Later that same day, Ron checked his trail camera and saw a picture if the Big Boy. The date was October 26th at 6:30 am and he was directly behind Ron´s house. Ron played a hunch that he was now staying in his 80 acres after the farmers had cut the corn on the 100 acres Josh and I had been hunting. Ron made a plan to hunt his back stand on Friday the 28th. The weather looked great and the deer were starting to move in Northwest Pennsylvania.

I had decided to take a trip to Central Ohio to hunt with my friend Bill Pyles of Ohio Bowhunting Outfitters. I left for my trip on Thursday, October 27 and planned to hunt until Sunday the 30th. The weather looked like it might cause some problems as the temps were going to get into the 70´s on Saturday and Sunday. Yet the weather in PA was going to be perfect conditions for hunting. I was sitting on my stand in Ohio on October 28th when I got a text from Ron that he had shot the Big Boy. He sent pictures and I knew the buck was going to be bigger than what we thought.

Ron had set out early on the 28th to hang a few tarsal glands. He had a buck and doe tarsal that he had positioned near his stand. He set up with the wind in his favor and hoped the Big Boy was around. At about 8:30 Ron saw a deer moving through some brush. He saw antlers and knew right away which buck he was looking at. The Big Boy walked away from Ron but caught a whiff of the tarsal glands,  could not handle it and walked back in Ron’s direction. The big antlered buck stopped at about 30 yards and worked a tree giving Ron the opportunity to draw, carefully aim and release the Zombie Slayer. The arrow was true and the buck slowly walked off as Ron stayed in his stand and watched. The Big Boy slowly walked into some thick brush and laid down. As Ron watched, the buck tried to get up, staggered and fell back over.

Ron quickly but quietly made his way back to his house to get his son, Christian to help him with the deer. Ron was worried the buck might get up and having an extra set of eyes would be a huge help. The two of them cautiously approached the Big Boy and realized he had expired. Ron was excited the buck was down for good and had Christian take some great pictures that he sent to Josh and I. We were as excited as Ron on this super buck.

My hunt in Ohio was nowhere near as rewarding as Ron’s as the weather made the deer stay put and there was little movement. I arrived home on Sunday the 30th and headed over to Ron’s to green score his buck. The buck had it all! 19 6/8 inside spread, main beams of 24 and 25 inches, great mass, and solid tine length. After adding up the numbers I told Ron that he had topped his buck from 2015, with a score of 154 ? inches typical. The buck field dressed at 230 pounds and is estimated to be 4.5 years old. Ron was still in awe of the great buck he had killed on his own 80 acres.

Josh and I knew there were still some great bucks around but we both chose to hunt different areas for a few days. I decided to skip Trick or Treat and hunt all evening on the 31st. I have yet to kill a buck on Halloween. I had a great hunt and saw 3 different bucks and a few does. As I was waiting at home for my wife and kids, Josh called me to say he had shot a great buck at another property. He wasn’t sure how good the hit was and I asked if I could help but he told me he had family coming over to help with the search. I wished him luck and told him to text me some good news.

At about 9:30 I got a text from Josh. He was holding a thick racked 8 point and the smile on his face was huge. This was his first ever archery buck and the Black Eagle Rampage did it’s job. Josh called me not long after that and asked if I could green score the buck.  The buck was a nice 9 point as it had a non-typical point at the base of his right antler. Ron joined us to see the buck  and we all wanted to hear the final score.

I finished the numbers on Josh´s buck, 150 inches non-typical and read it to the group.  This buck had huge sweeping 24 and 25 inch main beams with the right G2 13 4/8 inches. The mass was huge as well. As a main frame 8 point it went 147 and change. Josh was still in shock as we all congratulated him on his first buck.

As for me, there is still plenty of season left to take down a great buck, like the Big 7 that lives up the road from me. I have his shed from last year that scored 123 inches. He has since grown 7 more additional points and is 4.5 years old. I am hoping to catch him chasing one of his girlfriends.

How To Skin Your Spring Bear

VIDEO: Where To Aim On A Wild Turkey