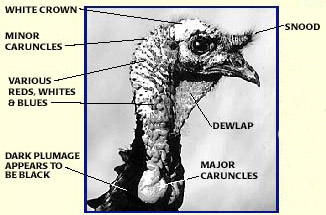 Newbee Turkey Hunter: Can You Tell The Gobblers From The Hens In The Fall?

It’s easy to distinguish a big, mature gobbler from a hen. First, there is that long beard sticking out of his chest and hanging down several inches. Also a mature gobbler is larger than a hen and his feathers are darker. And if he is in full-strut, every feather on his body is extended to the max; plus his head is bright red because you’ve excited him with your turkey calling, you will instantly recognize him as a gobbler.

However, what if he is not a mature gobbler yet? What if he is a younger, first year gobbler, refereed to by the State Game Department as a ‘Juvenile’ turkey, and to hunters as a ‘Jake.’ And even though he has a beard it might be short to poke out of his chest feathers. Or maybe his beard is sticking out a little bit and you cant’t quite tell if your eyes are playing tricks on you ,.. or not.

And what if, in early fall, some young Jakes are still traveling with a group of hens of similar age. And you have a Fall wild turkey tag and you want to attach it to a legal turkey’s leg.

Chances are good that unless you are a very experienced turkey caller you won’t call in a Fall gobbler. But if you are in good wild turkey country it’s very likely you will see groups of wild turkeys, both hens and young gobblers. 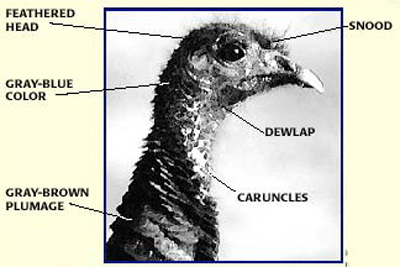 The hen’s overall look is all about camouflage and protection from predators. She is smaller and appears more drab than mature gobblers. The top of her head as well as her neck have more feathers which adds to her camouflaged appearance. 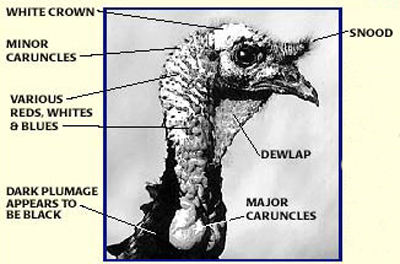 Likewise, the young Jake is smaller and more drab than the colorful, more mature gobbler. Gobblers have a Snood on  their head in front of the beak. A mature gobbler can make his Snood long enough to hang down on his neck. The young gobbler’s Snood is still a bump on his head.

DEWLAP: A tissue grows from the middle of the neck to the gobbler’s chin just behind the beak is named a Dewlap. Both males and females have a Dewlap but a gobbler’s is longer and wider and it turns red when he’s excited. but is more prominent on males. Like the caruncles and snood, the dewlap turns bright red when the tom gets excited.

On the younger gobbler these Caruncles are not fully developed but they are longer than the ones on hens and give the appearance that a male turkey’s head is mostly skin and the hen’s head and neck consists of smallish feathers and less pronounced fleshy tissue.

BEARDS & SPURS: The mature gobbler is easily recognized by the long beard growing from his chest, and the pronounced spurs, sometimes as long as two inches, found on the back of his legs. Spurs on a Fall Jake are more of a hard triangular lump.

Being Involved at a Young Age