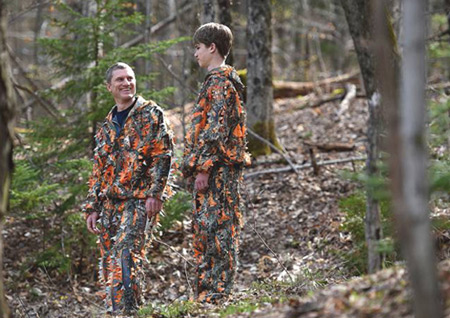 See3D Camo, founded by a son and father team, is launching a new product that rethinks hunter safety wear. The See3D Camo suit is an orange leafy suit that incorporates safety orange and “3D leaf” technology to greatly improve how the hunter’s outline blends into their surroundings. The new suit makes them invisible to deer, yet highly visible to other hunters.

“I was sitting in a tree stand with my Dad and we were both wearing bright orange for safety. I thought to myself, ‘We can’t be very hidden from deer, we have too much solid color, there has to be a better way to do this,’” says Peter, aged 13.

According to U.S. Fish and Wildlife, of the over 13 million hunters who take to the woods each year, more than one thousand are accidentally shot, many of them fatally. Forty-two of 48 states require hunters to wear “safety orange” while hunting to prevent accidents, but many hunters take off their safety colors while in the woods. The reason: big blocks of solid color don’t break up the hunter’s outline well enough, so deer spot them and run.

“If camouflage doesn’t work, hunters won’t wear it,” says Barrie. By combining a modern 3D leaf camouflage patterns and incorporating safety orange, the new suit makes hunters invisible to deer, yet highly visible to other hunters. “This suit should also help wildlife photographers or anyone else who wants track animals safely in the woods, as well, “ says Peter.

The new hunting suit will be available nationwide this summer, well ahead of this year’s hunting season.

See3D Camo LLC is a Vermont-based company that specializes in camouflage for hunters. Its main product is the Blaze Orange 3D Leaf Suit. The camo suit was born out of safety concerns while hunting with children. It is a revolutionary new concept in hunting safety that uses 3D leaf technology on an orange base that allows the hunter to be highly visible to humans, yet invisible to deer. For more information visit http://see3dcamo.com

No Soup For You!