No Soup For You! 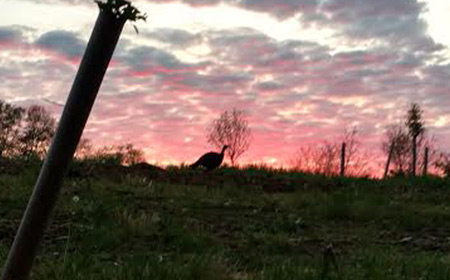 I absolutely love hunting Thunderchickens in Pennsylvania. I don’t think there is a day that goes by that I don’t see turkeys where I live. A few years back, Pennsylvania changed some of their laws regarding spring turkey season. The PA Game Commission started selling bonus turkey tags and they allowed hunters to hunt all day half way through the season. With both of these changes I have seen my success, with turkey hunting, increase dramatically. Yet, where I live, we have a strong population of turkey to hunt.

I took advantage of the all day hunting in 2011 and killed a great spring gobbler at 6:00 pm while he was after a few hens. In 2012 I killed my largest bird, 26 pounds with 1 ½ inch spurs and a 11 ½ inch beard. I also killed my first spring gobbler with my Black Eagle Arrows Carnivores and Grim Reaper Broadheads. I have killed multiple birds every year since the state changed the regulation. In 2016, I played cat and mouse with a double bearded bird that I finally killed with the Benelli Super Black Eagle. It is safe to say that I am a Spring Turkey Junkie!

Being a 6th grade Social Studies teacher, I am required to be at school by 7:20 am! It takes me about 20 minutes to get to work so I am able to hunt till about 6:45. Yet, I am out every morning before school hunting those crazy Jellyheads. My main tactic that I use is to set up my ground blind near their roost and try to get them to come to my decoys right after they hit the ground. Of course, Turkeys rarely follow the script and it takes me a few days to get the blind in the best spot.

On April 22 I had my daughter Abigail in the blind for the PA Junior Spring Gobbler Day! We set up near the roost and heard a few birds gobble. We could hear them fly down and head the other direction. We stayed in the blind till about 10:00 and then she wanted to head home and have some breakfast. Later that day, I went back and moved the blind to another spot near the roost. It would be another week until the regular season started and I wanted to be ready.

The weather for the PA Spring Turkey opener on April 29th was great. I was in the blind early and had birds gobbling all around. The sun was climbing slowly and the wind began to pick up. The birds stopped talking as I knew they had flown down and hit the ground. I had moved my blind to the opposite side of the field and down over the crest of the hill. At about 9:30 am, I could see some head for the top of the hill. I counted 2 hens and 6 gobblers. I ranged the crest of the hill and it was 65 yards. In the blind with me I had my Obsession M7Z, Zombie Slayer Arrows, tipped with Grim Reaper Carni-fours. With the wind picking up, all I could do was hope they would leave the hens, FAT CHANCE, and head down to attack my jake decoy. That wasn’t the case for the day as I watched the hens feed out of sight with the love struck gobblers strutting their stuff behind them. The field had cleared so I decided to relocate my blind once again to the other side of the field closer to the roost.

Pennsylvania is still one of the few states where it is unlawful to hunt on Sunday so I had to wait until Monday to get back into the blind. The whole next week I had close encounters with gobblers and hens. I saw birds everyday yet they were just out of range for a bow. The weather for Saturday, May 6th, looked very wet and rainy. I did not let that stop me and at sun up, I was patiently waiting in the blind. With rain in the forecast I decided to hunt from the blind with the bow then at about 10:00 head home and grab the shotgun.

The weather was much better suited for hunting ducks as the rain fell hard and the wind blew harder. At one point, my blind, even though staked to the ground, was being lifted by the wind. I decided that it was time to head home and put on rain gear and grab the Benelli.

I walked across the road and set up in a finger of woods between two fields, where birds like to hang out! I gave out a few seductive yelps and 4 birds gobbled not far away. I waited patiently for a few minutes and gave a few more soft calls. The birds hammered once again and were closing the distance quickly. One redhead peaked through some trees. Behind him were three more red heads all looking for love. I knew what this was, it was a bachelor group of Jakes out on a stroll for a lonely hen! I focused on the last bird as he was the loudest and most vocal. His white head looked like a lightbulb and he was walking calmly behind the other birds. I waited patiently for them to close the distance. My G-Force Evolved Camo kept me hidden and secure. The first Jake came into the opening 15 yards away. He had a small beard. He was followed by another Jake with a three inch beard. The third Jake had no beard at all. I was hoping the last bird was going to be the one. Gobbling before stepping into the opening, he lit up the wet woods. The bead of my Super Black Eagle was focused on his white head. I saw a nice beard and pulled the trigger. The bird flopped and the other three Jakes gobbled multiple time. 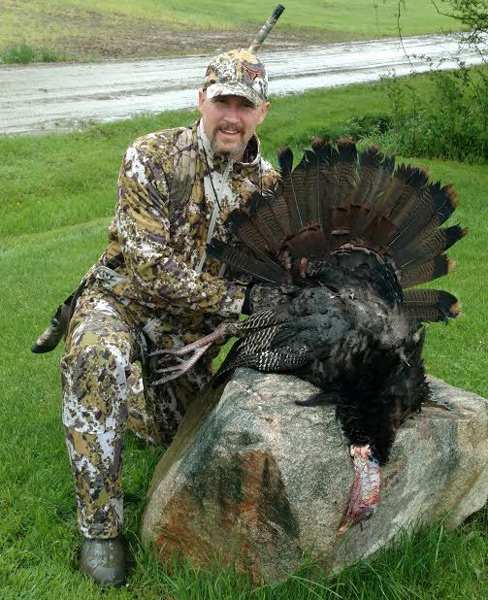 I was excited to fill one of my two tags. The gobbler had ½ inch spurs and a nice 5 inch beard. He will eat great later this summer when we deep fry him!

The week of May 8th looked to be a great week as the weather was warming back up and there was limited ran in the forecast. Wednesday, May 10th was going to be my 43rd birthday and I was hoping to kill a gobbler with my bow, on my birthday. Monday was a slow morning and the birds were not much in the mood to talk. Tuesday was a little more of the same. On Wednesday morning the birds were hammering at every sound! It seemed as if they were directly behind my blind. I could hear them fly down and hit the ground but they were still in the woods. Listening to them gobble, I could hear them getting closer. Looking at my watch, I was hoping they would make it out into the field soon. It was 6:35 am and I needed to be out of my blind in 10 minutes. Listening intently and scanning the field I saw nothing. At 6:45 am I packed up my stuff and got ready to leave the blind. As I was unzipping the blind the first gobbler entered the field at 35 yards! I was stuck. Then a whole flock entered the field and fed my way. With my arrows put away and my bow leaning outside against the blind, I decided to sneak into the woods and head back home. I ducked down low to not be seen and walked like a duck for about 100 yards. I changed for school and drove by the field. Sure enough the birds were all in a group about 20 yards in front of my blind. There would be no Birthday Bird!

Thursday, May 11th with Obsession bow in hand, I made my way to the blind in the dark. The weatherman was calling for spotty showers between 6 and 7 am. As the sun broke over the horizon a gobbler let loose with a few gobbles. I looked out the back window of the blind and scanned the trees. With the leaves growing in fast it was hard to see to far into the woods but I knew he was close. Another bird gobbled trying to be louder than his challenger. I sat back and listened to them argue back and forth. A light rain began to fall on my blind yet the two bachelors continued their song.

Hearing the familiar flapping of wings, I knew the two love struck gobblers were flying down to the field. I watched them land 45 yards away from the blind. I made a few light yelps and they began to head my way. Being left handed, I was going to need them to walk more my way and into an open window of the blind. They moved methodically up the hill, closing the distance to about 30 yards. One bird would gobble and strut while the other Tom lingered close by. They eyed my decoys that I had set out and worked cautiously my way. I heard movement and a gobble to my right. I slowly turned my head to see a group of hens feeding into my decoy set up. A Jake was with them and he was gobbling to the hens.

The two gobblers saw the hens and began to walk more my direction. Both birds were in the plowed field watching the hens feed. I called softly a few times and both birds gobbled. One bird broke into full strut trying to make his friend look smaller. I ranged the strutting bird and he was at 35 yards. I was beginning to think that the birds would not close the distance and I would be stuck wondering what had happened. Watching the strutter turn around, I got on my knees, adjusted my HHA sight to 35 yards and drew my bow. My green pin floated on the gobbler and I let the Zombie Slayer fly. I watched as the green nock disappeared into the bird. The turkey dropped on the spot. His buddy looked at him and wondered what had happened. I was so pumped that I had just filled my 2nd tag. I looked at my watch, it was 6:30 am. I let the camera run as the bird flopped a few times.

I unzipped the blind and walked up to the downed bird. I quickly picked him up and brought him back to the blind. The rain began to fall harder and I knew I needed to get back to the house. I tagged the bird, packed up my gear and headed for the house.

I snuck in the house and woke my kids up. They always love to see what I was able to harvest. My daughter squealed as she opened the door. My son came out and looked at the birds spurs and stroked the feathers. I took a few quick pictures and then dressed the bird. I was able to get dressed and get myself to work on time.

Later that evening I watched the video and was impressed with how well the Carni-four put the gobbler down. I edited the footage and uploaded it to my youtube channel. Looks like I will have to pass on the tag soup again this year. What an exciting PA Spring Turkey season. Now it is time to help get my daughter and son a bird.