The Damage Wolves Are Inflicting On America: Part 4a Big Wolf Lies: 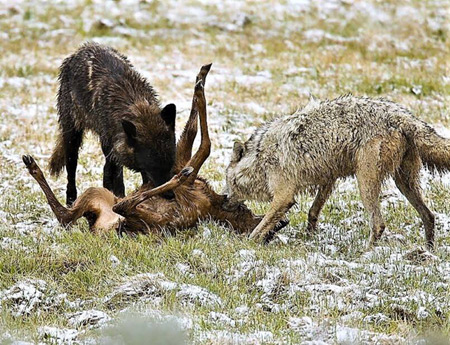 Along most of Montana’s western boundary, the Bitterroot Mountains form the border between the state and neighboring Idaho.  The area shown here was always one of my late wife’s favorite camping spots … located about 70 miles south of where we lived in Missoula.  It was a great getaway from all the noise of Montana’s second largest city.  From our camp, situated on a mountain lake at around 7,000 feet, we would regularly see moose just about every morning or afternoon … and in the last light of the day, white-tailed deer would literally walk right through our camp.  From camp, we often glassed a few bighorn sheep or mountain goats up above the tree line, along with an occasional band of elk.  We always tried to camp there on Labor Day weekend – just so we could lay awake in the tent at night and listen to the cow elk calling … and bulls bugling.

Then, over a period of just a couple of years, it all changed.  The moose had disappeared … the elk were gone … it became extremely rare to see bighorn sheep or mountain goats and the deer numbers in a large area of the Bitterroot Mountains and the famed Selway-Bitterroot Wilderness Area had hit the lowest level regular visitors to the area had ever witnessed. The only “wildlife increases” had been with the major apex predators, bears, mountain lions and, especially, wolves.

The same degree of big game population loss was being felt up and down the entire western side of Montana and when the sportsmen who had hunted these mountains and valleys for decades began to confront Montana Fish, Wildlife and Parks about the tremendous decline in game numbers, well … those sportsmen weren’t quite ready for what “Their Wildlife Agency” had to say.

MT FWP wildlife managers and biologists outright lied to those who had been supporting the agency through the annual purchase of hunting and fishing licenses and permits.  Montana’s fish and game department “experts” would stand right in front of thousands of irate sportsmen and claim those sportsmen were wrong and were not “educated enough” to truly assess the big game situation – even though, collectively, those sportsmen had spent many more days, months and years “studying” the game they hunted while FWP’s “professionals” were largely “book learned”.

??The agency fraudulently made up exaggerated big game population numbers  and made accusations that hunters had simply “become too lazy” to hike into where the deer and elk were located.  “College Educated” wildlife biologists blatantly claimed that the elk calf survival rate was sufficient to keep the herds healthy, when in reality the number of calves surviving long enough to make it through to the following spring numbered only 6, 7, or 8  PER HUNDRED COWS!  Just for a herd to survive requires a survival rate of around 20 calves per hundred cows and to allow hunter harvest of elk means a survival rate of 27 or 28 per hundred cows.

What infuriated Montana’s sportsmen even more is the manner in which MT FWP  tried to hide the true number of wolves in the state which were killing far more elk than other predators.  The agency repeatedly lied about wolf numbers. Either that or they simply were not professional enough to accurately assess a number anywhere near the actual population of the non-native Alberta wolves which the U.S. Fish and Wildlife Service had wrongly transplanted into the Northern U.S. Rockies.  When the wolves were delisted from the Endangered Species List in 2009, FWP claimed the number of wolves in the state to be “at least” 550.  Those sportsmen who spent so much time in the outdoors realized that the true number was more like 2,500 to 3,000 and it was those wolves that FWP did not acknowledge that were destroying game numbers.

So, why would a state wildlife agency work so hard to cover for predators that were destroying big game herds that took a hundred years to rebuild?  Why would that agency destroy its reputation among the sportsmen who entrusted those wildlife managers and biologists to operate under the North American Model for Wildlife Management to insure a bounty of game and fish?

Be sure to catch Part 5 of this series next month … and be ready to be surprised at the agenda driven ideology behind the Northern Rockies Wolf Recovery Project and the real impact that is being inflicted on America.  Also, be ready to become extremely angry.

(Note:  Much more was originally intended for Part 4 of “The Damage Wolves Are Inflicting On America” series but it was so long we had to break it up into two parts. Part B will be available shortly. If you are just now tuning in on this coverage of the “Big Wolf Lie”  be sure to read Parts 1, 2 and 3.)

Wild Turkey Vision: The Facts You Need To Know