The Damage Wolves Are Inflicting On America: Part 4b – Big Wolf Lies 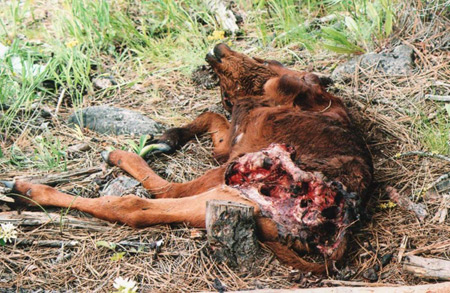 Is it the intent of environmental groups to make it impossible for ranchers to raise cattle in the West? You bet it is!

If you live within the reddish or pinkish shaded areas of the corridor shown on the accompanying map … you just might be among the first to feel the bite of the United Nations’ pipedream known as Agenda 21.  What this map shows is one Agenda 21 installment of The Wildlands Network, known as the Yellowstone to Yukon Conservation Initiative.

This is a collaborative effort of more than a hundred environmental groups, organizations and related agencies. One of those “radical” agencies just happens to be MT Fish, Wildlife and Parks which is listed as a collaborating partner of this plan to force residents off the land in order to establish a 2,000 mile long “wilderness corridor” running from the Greater Yellowstone Area all the way to the Yukon.  A few years back, irate Montana sportsmen forced the agency to withdraw its name from the list but it is now back on that list.  And so is the University of Montana, who’s Dr. Robert Ream lied about the native Northern Rockies wolf “no longer existing”.

Did you know that until just a couple of years ago, Bob Ream also headed the Montana Fish, Wildlife and Parks Commission and steered Montana’s fish and game agency away from adequate wolf control and to hide real wolf numbers and hide the true damage wolves were inflicting on big game populations.  It should be clear to everyone that MT FWP and the University of Montana have been and continue to be willing partners in this wildlife disaster.

f you live inside the shaded areas of the Yellowstone to Yukon Conservation Initiative corridor shown on this map, be prepared to be evicted!

LOBO WATCH publicized the anti-predator control stand of this Agenda 21 initiative and once sportsmen began questioning their intent to establish such an anti-hunting stand on the taking of predators… that statement was quickly removed from the site.  The fact remains, this is an extremely anti-human Agenda 21 tied initiative and it is already being implemented.  In much of the U.S. Inter-Mountain West the U.S. Forest Service has already closed off public access to many areas in order to establish “travel corridors” for major not so “endangered or threatened” apex predators, namely wolves and grizzly bears.  Likewise, Montana’s overly “environmentally friendly” Senator Jon Tester has been busy adding to the federal registry of “National Wilderness Areas” to help build more of those “Core Reserves” where major predators can proliferate then move out onto the human inhabited landscape once the prey base inside those “Wilderness Areas” has been decimated.

Rest assured, that’s all part of the plan.  Take a look at the accompanying maps, showing the original Y-2-Y corridor proposed back in 1993 and the progress made by 2013.

The Northern Rockies Wolf Recovery Project and the efforts of The Wildlands Network have collectively made some serious negative impacts within the Northern Rockies Wolf Recovery Area. With such a dramatic loss of big game, in many areas wolves and other wild carnivores are now turning to domestic cattle, sheep, horses, mules and pets.  It doesn’t take the loss of many head of cattle to push a ranching operation into the red and that loss of huntable game has also forced many hunting outfitters to simply close up shop, while many small rural businesses are now struggling due to the loss of income during the “hunting seasons” each fall.  One certified public accountant put a dollar amount on the ANNUAL economic loss due to wolf impact in Montana alone at around $125-MILLION!

Something that both the 1994 Northern Rockies Wolf Recovery Project EIS and Plan failed to include was to identify the parasites and diseases wolves carry and transmit.

Retired USFWS biologist, special agent and division chief Jim Beers has identified more than 30 different such infectious parasites and diseases which can be transmitted to other animals, and some even to humans. The list includes rabies, distemper, parvovirus, hepatitis and mange.  Of particular concern is the Echinococcus granulosus tapeworm which a large percentage of wolves are known to carry.  In fact, nearly 3/4ths of the wolves tested in the Northern Rockies have been infested with these tapeworms.  The danger from this parasite are the Hydatid cysts they form on internal organs and sometimes in the brain.

Each and every time an infected wolf defecates, the pile of scat left behind is loaded with thousands of the microscopic E.g. eggs. These are easily spread far and wide by mountain breezes, rain, on the shoes of hikers, by the rushing waters of a mountain stream, on the tires of a mountain bike, or in the fur of wolves and other animals.  Elk, moose, deer and other big game, as well as livestock, ingest eggs which have settled on blades of grass, on the leaves of plants on which they forage, or perhaps while taking a drink. The eggs are then carried by the blood stream throughout the body, where they can form Hydatid cysts. Hunters in the Northern Rockies are now finding those cysts on the lungs and livers of big game they harvest.

Dr. Valerius Geist – Professor Emeritus of Environmental Science, Faculty of Environmental Design, University of Calgary in Alberta points out the cysts contain thousands of tiny tapeworm heads floating in a liquid. Geist claims that in elk, deer, moose, caribou, etc., neither the cyst’s liquid, nor the tapeworm heads are anything to worry about. Stating they cannot infect you.

He says, “Native people have been eating hydatid infected moose, caribou and deer forever. The meat is safe.”

Geist also shares that humans can contract Hydatid disease only through the ingestion of E. granulosus eggs, which originate from the scat of wolves, coyotes and other canines infected with the tapeworms. One of the most common carriers to humans is the family dog, which can bring those eggs right into the family home.  Dogs are notorious for rolling in the scat of other canines.   And even if they don’t, a long run through the grasses of where wolves live could mean bringing in dozens or hundreds of those eggs in their fur or hair, where they are deposited in the carpets where children play. Or, they could be transferred directly to humans when the dog is loved on, and returns the affection with a good healthy lick or two.

Likely one of the more common ways for humans to ingest the eggs is to have them on their hands when eating a sandwich, a piece of fruit, or maybe even something as delightful as a sweet glazed donut. Dr. Geist points out that Hydatid cysts don’t pose that big a threat when just one or two of the cysts form on or in the lungs or liver, where they are encapsulated by the host tissue and may eventually calcify. However, he points out that a Hydatid cyst that forms in the brain can prove lethal. He also notes that multiple cysts forming on the lungs, heart or on long bones can become medically problematic, interfering with organ function and possibly could overcome the immune system.

He states emphatically, “Should the cyst burst (internally), then the liquid will generate a severe allergic reaction. Anaphylactic shock may be the consequence. And that can kill the patient on the spot!”

Outdoor recreation has changed dramatically in many areas of Montana (and next door in Idaho) due to the escalated numbers of wolves, bears and mountain lions and MT FWP’s resistance to loosen up “methods of take” for predators.  However, one giant step in the right direction has been the legalization of trapping for wolves in several Rocky Mountain states.  Unfortunately, Montana’s wildlife agency still prohibits the use of snares which are far more effective than traps.

Whining anti-trapping and anti-hunting groups, like Footloose Montana belly ache over the thought of a dog or two being caught in traps set for wolves but show absolutely no remorse for what wolves are doing to hunting dogs, pets, horses, livestock and big game.  The lion hunting hounds shown in accompanying photo were killed and eaten by wolves that ran in on them while the dogs were baying a treed lion.

One of the founders of Footloose Montana has  the gall to suggest that the state’s non-hunters should have more say when it comes to wildlife management, even though the vast majority of that segment of society has never spent a penny on real wildlife management.  He also requested that some of the state’s Wildlife Management Areas, bought with hunter and fisherman dollars, be turned into non-hunting, non-fishing and non-trapping areas for non-consumptive users.

It is the intentions of groups like this which concern the Northern Rockies’ outdoor oriented population and sportsmen who have fully funded state fish and game agencies since they were established. Perhaps it is time to assess a use fee for all using FWP lands who have not purchased a hunting or fishing license. Many sportsmen feel it is time for these people and groups to begin paying their way.  Many of Montana’s hunters and fishermen want to see “Parks” stuck somewhere else and putting an end to “The State” using funds from the sale of hunting and fishing licenses and permits to buy, maintain and operate park lands for the general public.

Many residents living within the Northern Rockies Wolf Recovery Area feel it is only a matter of time until a pack of wolves take down a child walking to and from a rural school bus stop.  Many residents prohibit their children to walk down a long lane to a farm or ranch house or down the road a half-mile to visit or play and whenever a family or group is now headed out for some outdoor recreation, more often than not at least one of the group will be packing a firearm.  The radical “re-wilding” groups are actually counting on such fears to eventually begin to force rural families to move into the “safety” of cities.

In Part 5 of this series, we’ll look at ways to fight back, to take on those who look to destroy true wildlife conservation in this country and around the world.  We now have a Secretary of the Interior who is a hunter who hails from Montana and knows the wolf problem.  We’ll share how to get your concerns to him and to share with him the impact wolves have had on our big game populations.  He is over the U.S. Fish and Wildlife Service, the very agency that dumped these wolves into the Northern Rockies and we now have the best chance ever of forcing that agency to take care of the problem.

Being Involved at a Young Age