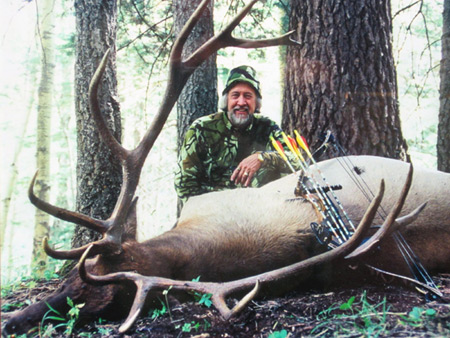 YOU DON’T HAVE TO BE an elkoholic – or even an elk hunter – to appreciate the regal majesty of a rutting bull elk in his prime. A mere glimpse of those oversized antlers, and the eerie sounds of fluting bugles, throaty grunts, and guttural growls, can fire the imagination and touch the soul of anyone.

Growing up in southern Illinois and pursuing a college degree and profession in Indiana, I was a late-comer to elk hunting. A fat Montana spike was my first bow kill. That was in 1987, and I was 46 at the time of that adventure in the Little Belt Mountains near White Sulphur Springs. I killed my first six-by-six the following year on a pack-in bowhunt with good buddy Dick Kirby of Quaker Boy Calls fame. We were hunting in the Wyoming Wilderness just south of Yellowstone Park.

To say I was infected with elk hunting fever would be a classic understatement. In later years more Wyoming and Montana bulls would fall to my arrows, along with bulls tagged on hunts in Colorado and New Mexico. Two of my larger bulls from those latter two states were my first to qualify for the Pope and Young record book.

Lots of tasty elk venison and impressive antlers to boot. Such a deal! That’s the allure and fascination of elk hunting. Throw in some magnificent high country scenery where herds of elk can be found and you have good reason for daydreamers to add bowhunting for bugling bulls to their bucket list.

My best bull fell September 10, 1996, during a spot-and-stalk Colorado bowhunt south of Pagosa Springs near the New Mexico line. The big seven-by-seven had a gross score of nearly 360 and official net Pope and Young score of 342-4/8 inches. But, since I’m now in the autumn of a lengthy bowhunting career that spans more than 50 years, I know I’ll never tag a better bull.

No matter, really. Somehow the mountains have grown steeper and the thin air thinner in recent years, and I realize my elk hunting memories, videos, and photos will have to suffice as my full attention now shifts to my first and truest love – bowhunting whitetail deer.

AT THE SAME TIME I’M ASSUMING THE ROLE of a “retired” elk hunter, I’ll continue to admire these antlered monarchs and act as a cheerleader for my Montana-based son Dave, grandson Marc, and my many friends who each September continue to feel their hearts beat faster when a nearby herd bull bugles in the dark timber just ahead of where they’re standing.

Fortunately there’s good news for all the men, women, and kids in camo who live to hunt wapiti. There are still monster bulls alive and well and waiting for anyone who ventures afield to hunt these magnificent antlered animals. Only this past September 10, Steve Felix, a resident of Seeley Lake, Montana, killed a giant bull elk on a public land bowhunt in Powder River County. Its official score of 430-0/8 inches not only shattered the existing world record but earned the Pope and Young Club’s highest honor, the infrequently given and highly coveted Ishi Award. Only 19 of these awards have been awarded since the Club’s founding in 1961.

Steve’s success story was a bowhunter’s dream come true. He was stillhunting when he first spotted a bull in some nearby brush raking a small tree with his oversized rack. One look though his binocs told Steve the bull was a definite “shooter.” After easing closer, he found an opening and released an arrow. Although he didn’t know it at the time, the shot would make bowhunting history and rewrite the P&Y record book.

The giant Montana bull had a gross score of 447 inches and was officially measured by teams of Pope and Young and Boone and Crockett scorers. That elk’s final 430 score (after deductions) dethroned an Arizona monarch arrowed by Shaun Patterson in 2005. Shaun’s previous World Record bull has an official score of 412-18.

By comparison, the numero uno Boone and Crockett bull is an Arizona giant from the White Mountains that was killed by a hunter named Alonzo Winters in 1968. Its official score is 442-5/8.

So dream on! The dusty, cobwebbed cliché that “records are made to be broken” is nonetheless true. And it’s human nature to imagine releasing an arrow at an actual mountain monarch that will be the envy of elk hunters everywhere. Regardless of whether that happens, I’m betting you’ll come to understand that elk hunting itself is an outdoor pastime worth pursuing season after season because the memories you’ll amass are pure gold.

The Damage Wolves Are Inflicting On America: Part 4b – Big Wolf Lies