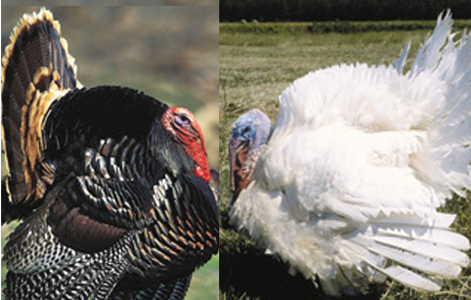 What Is The Difference Between Domestic & Wild Turkeys?

Wild Turkeys are one of the most famous birds in North America. 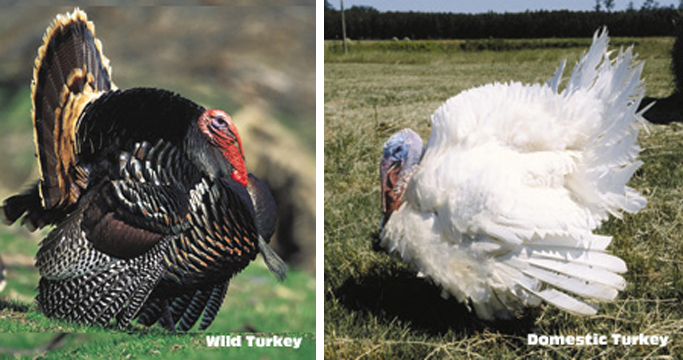 One difference is survival, a wild turkey hen teaches her poults how to react to predators and other dangers, as well as how to get food, social behavior, vocalization and flocking together. A domestic turkey doesn’t have the opportunity to learn these survival skills.”

The differences between the two are easily recognized. Although very similar in some aspects, the wild turkey is as distant from the domestic as an athlete is from a couch potato.

Turkey Vocalizations
Domestic turkeys (male) will respond with a squeaky gobble to almost any noise and often stay in a vocal mood. However, wild turkeys (male) have learned that too much talking can call in things other than turkeys, like predators and hunters, so they don’t gobble as often as a domestic.

True skill is required to consistently call in the elusive wild turkey gobbler. Domestic and wild turkeys (female) will normally sound the same. They will yelp, cutt, purr, kee-kee, etc.

Domestic turkeys can not fly nor are they able to run very fast. They make easy pickings for any predator in nature. Their neck skin, or wattles, are heavier. Snoods, the finger-like appendage that hangs over the bill, are longer and breasts much larger and broader. The domestic turkey also possesses a temperament more suited to confinement.

Wild turkeys are sleek, alert and built for speed and survival. Their senses are sharpened through generations of living in a harsh, unforgiving environment. A wild turkey that loses its caution can end up a predator’s dinner. This constant state of caution has made the wild turkey one of the toughest game animals in the world to hunt or even to photograph.

Living Environment
Domestic turkeys are normally found on poultry farms crammed together in pens with other domestic turkeys feeding on corn and other poultry mixes.

Wild turkeys are found in forests and wooded areas all across North America. They feed on natural foods such as acorns, seeds, small insects and wild berries. Today, the wild turkey is a common sight across much of North America.

In the early 1900s, only about 30,000 wild turkeys remained nationwide. Today, the number of North American wild turkeys now stands at 6.4 million birds.because of Restoration Efforts by wildlife agencies and the NWTF and its half-million members.

Trap and transfer programs, such as the NWTF’s Making Tracks program remove wild turkeys from an area with a high population, and place them in areas where there are fewer wild turkeys in suitable habitat.

Back in the 1940’s, wildlife agencies and individuals decided to raise domestic turkeys and then release them into the wild, because at that time, they didn’t have a reliable way to capture enough wild turkeys. It was quickly discovered that restocking efforts with pen raised turkeys only serve to feed predators and hinder population expansion.

Lacking the natural caution (and intelligence) of wilderness raised turkeys is one reason that has kept domestic turkeys from being part of any wild turkey restoration efforts.

“We want to make sure END does not spread to wild turkey populations,” said Kennamer. “Though it is primarily found in farm and domestic poultry, the chance of infection in wild birds is still a concern to the NWTF.”