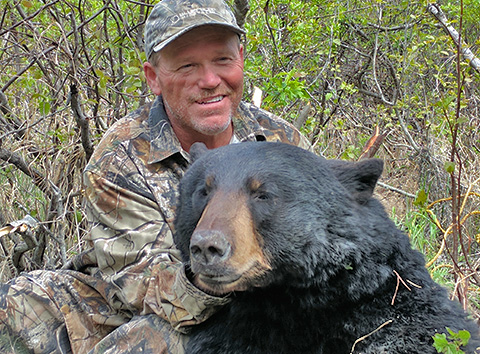 Absolutely nothing beats hunting with somebody who knows the area well and is tuned into what the bear’s do in that area.

As the boat cruised along the lake on their way to their afternoon bear bowhunt Cindy Lavender announced, “I see a bear on the other side!”

Steve’s guide Dean McClure slowed the boat and they glassed the bear. It was walking along leisurely between the water’s edge and the brush and it was a large boar. Dean saw a way to cross over without being seen. We’ll do a Spot-And-Stalk'” he told Steve.

Dean crossed to the opposite side and beached the boat. Cowboy Steve got out of the boat with his bow and they stepped into the brush and eased their way toward the oncoming black bear. Steve moved closer to the bear until he was  was 45 yards from it. Steve whispered to Dean that he did not feel comfortable shooting at the distance.

When the bear was past them they hurried back to the boat. Dean told Steve that chances were good that the bear was headed toward the stand they had hunted the last two days. They hurried.

Five minutes after settling into his treestand Steve saw the bear coming through the thick brush. It walked on a bear trail that went right by the stand. Steve felt his heart beating fast. He drew his bow and then pulled it all together just as the bear was broadside and 12 yards away. Steve aimed for the vitals and took his shot.

The big bear growled loudly and branches snapped and cracked as the bear disappeared into the brush. And a minute after the sound of branches and limbs breaking stopped, they heard a death moan. They were sure it was a good shot and that now the bear was down.

They picked up the trail and tracked it through the dense Alaskan brush  to the bear. The brush was too thick to get the bear through it.. Then they picked Cindy up and in the morning they returned with a chain-saw and Sled that they used to drag bears through the incredibly thick Alaskan brush.

They chain sawed a path to the bear and then cinched the bear to the sled and pulled it back to the stand. (The sled is the yellow frame thing in the above picture.) The bear is strapped on it, unfortunately the pic of the sled and bear is not very good.

However, the pictures Cindy Lavender took were very good. And here is Steve Montgomery, ‘Cowboy Steve’, with his big Alaskan Black Bear.

Later, on their afternoon hunts, Cindy saw more black bears and Steve saw his first Brown Bear walking along but it was out of bow range.

Steve was excited, his Alaskan bear hunt was truly a dream come true.

And, although he could not have known it, Cowboy Steve had more bear dreaming waiting for him.

NEXT, “A Big Brown Bear Down”

The outfitter for this Alaskan bear hunt is Joe Schuster, the owner of  Sportsman’s Air Service  alaskasport.com headquartered in Anchorage, Alaska.